Any ideas about what could be wrong?

I have posted this same question to the Unreal forums with screenshots for reference.

Thank you in advance for your help!
Jay

with GENERATE_BODY() all variable will be private by default, try put public: before variable u want to be exposed.

having a custom c++ class and make a blueprint out of it inside editor will result that the blueprint is a child of your c++ class, that means you have to set your variables at least as protected to get them inside the Blueprint. Right now they are privat by default as duncan mentioned and because of the childbehaviour you have no access to private parent variables.

what happens if you place EditAnywhere instead of VisibleAnywhere? for example in your PowerLevel

Thanks, but I did already try that. I’ve also tried protected, but the variables still do not show up.

Thanks, I already tried that. I’ve tried setting to public and private, but still they do not appear.

Yes, I tried that, too, without any luck. Thanks for trying to help, I appreciate it!

hmmm, the next thing i would try is, reproduce this issue with a new raw custom class. Are you having the same result with a variable inside there too?

Sorry if this is a really dumb answer, but I looked at my character classes and my C++ defined variables don’t show up in the upper left either. However, if I right click in the event graph, look under variables, under the category I’ve created for them, then I can get a reference to them…

Have you tried that? the only reason I ask is because the screenshots you link to focus on the window in upper left…

Thanks for the suggestion. I have tried right-clicking and checking under variables, but there is no “Power” category, the one I created for them, and the variables are no where to be found. I appreciate you taking the time to suggest that, though!

looks like adding quotes (") around the category name works for me in 4.7 preview 1

Good suggestion! I was thinking of that myself if nothing else works. Will report back with my findings. Thanks!

Thanks, tried that, doesn’t appear to help at all.

Another good suggestion, thanks. Tried it, but the category and its variables are still missing.

I’m not sure what your inheritance is like, however this seems to be working correctly in the current 4.7 preview 1 build. 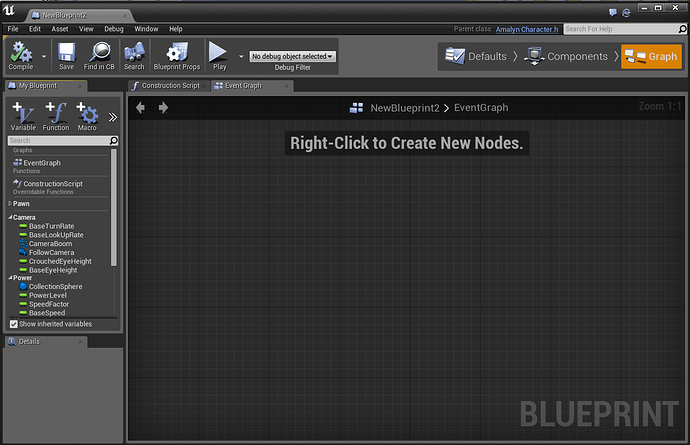 i appologize for the new answer, it wouldn’t allow me to post the response here, while including the code, and image

Actually, yes, I’m getting the same result. I tried creating a new 3rd Person C++ Code project and declared a new custom variable inside the Character class. I compiled the project, and when opening up the MyCharacter blueprint in the editor, the new variable can not be found. It’s as if the UE Editor is not using the custom code I’ve written when running.

Interesting. To answer the inheritance question, yes, I believe the inheritance is set up correctly, since the files I’m using for the Character class is the code the UE editor generated for my project when it was created.

I tried copying and pasting your code into my class to use it instead, and the build fails for me with the error “BlueprintReadOnly should not be used on private members”. Of course I’m using a different engine version (4.6.0) than you are, which might explain that difference. But still the variables do not show up for me in the Blueprint Graph after fixing that issue.

Just as an exercise, I downloaded the Windows version of the UE4 engine/editor along with Visual Studio and did the same thing: I created a new 3rd Person C++ Code project and declared a new custom variable inside the Character class. When I started a new debug instance and opened up the MyCharacter blueprint in the editor, my custom variable was there in all its glory. So there’s definitely something different with the Mac version of the engine and how it interfaces with custom C++ code. For example, what’s the Mac/Xcode equivalent to starting a new debug instance? Because there’s nothing in Xcode (or any of the Unreal documentation that I could find) that explains how to do that.