Hey. I’m not sure I’m one to help very much, but in order to assess the cause, we are going to need to know a bit more about the computer’s processing capabilities. Is it the MacBook Pro (2015) 13-inch diagonal size model?

I’m pretty new to this.

I’ve got a relatively simple map with only a few actors - although they are from the Kite demo kit and rather large. Once I started adding a few copies of the big rocks, lighting stopped generating.

It works to move around the preview/editor, but when I go to build lighting it never gets past 0% even after an hour.

I’m on a macbook pro laptop with 16 gigs of ram. 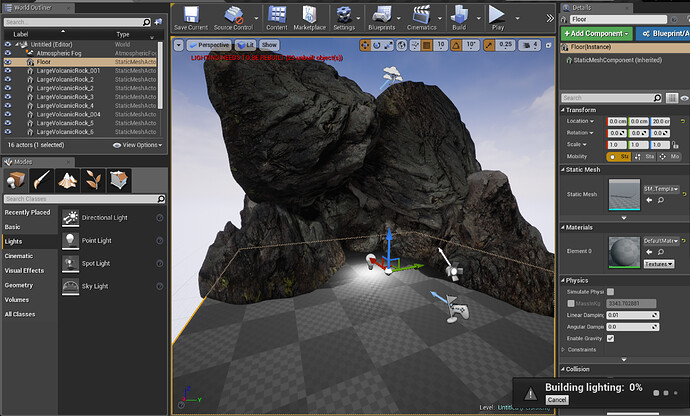 The levels from Kite Demo were loaded along with the objects - once I deleted those levels, compute lighting worked fine.

I have the same problem on mac, with levels that used to built very fast on previous engine version (4.14). Now the engine won’t built lights even on our empty level, which only has landscape on it. I’m using high-end Macbook Pro (2016) with i7, 16gb memory and Radeon Pro 460 (4GB).