Lighting refuses to build and is stuck at 0% permanently… It appears to be related to this texture bug where textures refuse to show as both issues started at the same time. I am unsure what caused it. Any help? 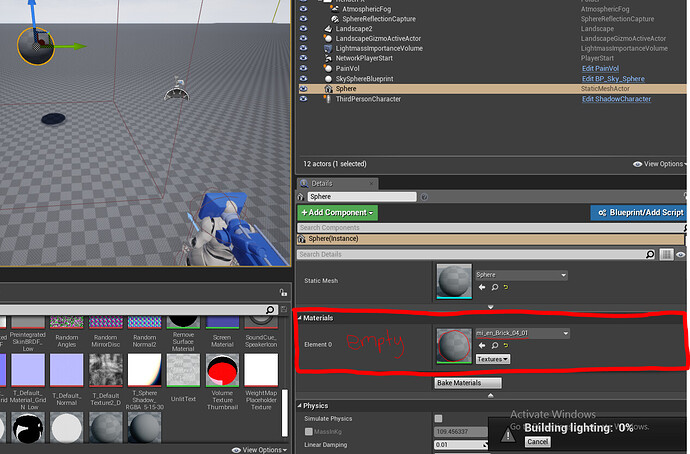 There can be multiple issues at hand.
To ensure you can actually bake lightmaps, you need to have at least one static or stationary light source inside your level. And every mesh that needs precomputed lighting, are either stationary or static, as well as a uv channel to use for lightmapping, by default this is uv channel #1.
The speed of which the lightmapping gets finished depends on your rig, as well as your lightmapping settings (settings inside the meshes themselves (lightmap resolution), and the lightmap quality).
At last UE4 uses a sub process to do the calculations for the precomputed lighting it’s called ‘swarm agent’, check if the services starts or not and is actually running (i.e. using resources), it should appear in the lower right of your windows taskbar. Alternatively you can check if it is running in the task manager.

Just a friendly reminder, I think you misunderstood how lightmapping in UE4 works, as UE4 doesn’t actually bake into the albedo texture of the given material. You can read up on this in this article from the UE4 documentation: Lighting the Environment | Unreal Engine Documentation
I’d recommend looking into Precomputed lighting for this.

Hello Braukers, have you checked if your static mesh components, are static or stationary? In your screenshot you’d have to at least have the sphere and the floor to be either static or stationary.
The missing texture thing might be an indication for the shaders not being compiled yet. If your shaders aren’t fully compiled the textures won’t show up in the level view, and they’ll be replaced temporarly by the default world grid material. Let the shader compilers finish their task before you begin building the light.

Swarm Agent is running each time. I have a stationary light in my level. I have a UV channel. Still bugged. The texture thing I imagine is an unrelated issue, just weird since it occurs at the same time as this one.

Alright, will try as soon as I can. Might take me a week as my project is on my other PC and I only have access to it once every week.