Detailed description of the issue:
DrawMaterial() can’t render translucent material (after some testing additive seems to bugged as well). 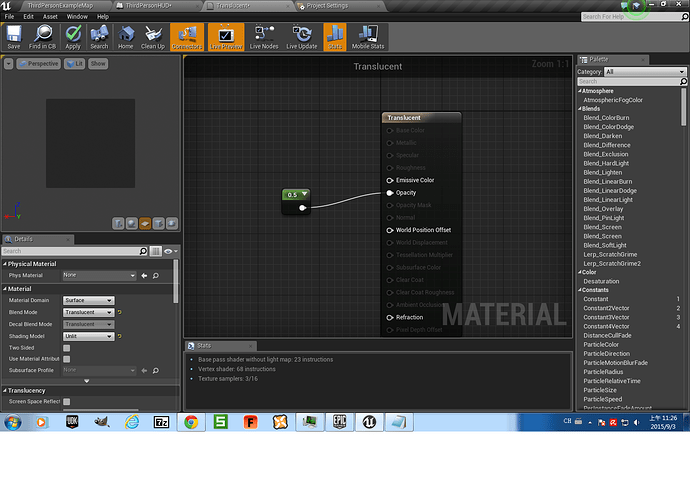 Repro Steps: (I can reproduce this bug in clean project, below is my repro steps)

I have this problem too. Funnily it does not show in mobile preview.

Try setting the ‘Material Domain’ to ‘User Interface’ to see if that fixes the issue.

Let me know if you have questions or if this did not solve your problem.

No problem, I will take the repro steps you have provided to see if I can get the issue to occur on my end. I will report back once I have completed my testing with any new information or troubleshooting suggestions.

Edit: To verify this is a C++ template project correct? As you description alludes to programming logic

I am also having this problem. I’ll have to defer my project’s upgrade to 4.9 until after this is fixed.

If you need more info please let me know.

Thank you for the quick response.

I have exactly the same problem.
Migrating the project from 4.8.3 to 4.9, all call to DrawMaterialSimple(), working before, do not draw anymore. In viewport, new viewport or Standalone game.

I was able to confirm the issue in 4.9 as you are reporting. I have gone ahead and entered a bug report for this issue (UE-20792).

When a fix for this issue has been implemented it will be added to the release notes of an upcoming hotfix or full release. You can find the Release Notes on our Documentation or the Forums under the Announcements and Releases section.

Same issue here. I’m gonna keep my project at 4.8 until this gets fixed.

Andrew, I sent you a PM about the repro last week.
I trust you were sent the email and example UE4 project (from Stephanie) demonstrating the bug.

As mentioned below in my answer for this issue, I have entered a bug for this issue. This is a far as I can go until the developers get a fix implemented into an upcoming release or hotfix.

UE9.1 realize and no hotfix for this critical bug.

seriously why not include this in the hotfix?

major part of my UI is now unsable as the material are not drawn… so disappointed.

I’ll try to push it into a hotfix.

Thanks for the update.
I wanted to look at the change but Idon’t know how to fins a changelist #.
Could you please post the link?