Broadcast update : what would be the smart way to do it

I’m working on a model in UE4; and for this I would like to use this concept (example)

I would like to avoid looping through lists of BP-objects.

In ActionScript3 I would have made an event and listeners; so every instance of an object would act on this event.

How would I do something like this in BP?

EDIT : the 15 min. is an example; could be a lot faster / several events would fire in a sequence based on a thick event (delay)

I would like to avoid looping through lists of BP-objects.

imo, This is the more optime way. why dont wanna use it?

btw.
how many objets.
for what hardware system?

Maybe I’m just stuck in “some way of thinking”

… and I thought I read somewhere not to use “get all actors from class” too much.

I just liked the as3 way of just adding and event listener to an object; not thinking about ref-list, etc…

But again; maybe I just should re-think this

10.000 or more if possible (most can be invisible) … just when focus should they be rendered.
But the invisible object should be active in the model.

and I thought I read somewhere not to use “get all actors from class” too much.

yes, it is true. But you can do it when the level start.

yes, it is true. But you can do it when the level start.

Ok; but I need to update a lot.
So the best way would be to put all the objects of a class in an Array and loop through them?

(so instead of the “get all actors” like in the video. If I use my own array (filling it while building the level) this would be the preferred way of doing it)

Would save you having to get each object in the level you want to update.

Would save you having to get each object in the level you want to update.

Ok, thanks;
would that be wise from a performance point of view ?
a clock of the “tick event” in every BP; to pull the variables (of several other BP’s)

in both cases need cast, but 10000 ticks events are not sure what can happen, you can try because is more easy to blueprontermaker.

Ok, thanks;
would that be wise from a performance point of view ?
a clock of the “tick event” in every BP; to pull the variables (of several other BP’s)

I will suggest using timeline for each object. I think if the interval is same you need not listen to the event you can set the timeline to each actor and perform the update after the set interval.

Though the drawback is you might have to change the timeline value for each of the object if you want to set it to different interval. Link for timeline.

This document contains an overview of how to create Timeline nodes in Blueprints and C++.

“A Level Blueprint is a specialized type of Blueprint that acts as a level-wide global event graph.”

Thank you all for your input.

I will start experimenting with all the options.

There are a couple ways I think you could do this. You’ll probably want to check out the “Blueprint Communication Methods” section of this page: Specialized Node Groups | Unreal Engine Documentation (I think there are also some demo maps/videos, but not sure off the top of my head).

One way is the aforementioned looping over a collection of actors manually and acting on them that way. You could construct that list in different ways (looping through actors up front and putting them in a list, having actors register themselves into a list as they begin play, etc.). If you needed different types of actors to be usable, you could also look into blueprint interfaces and use them in conjuction: Implementing Blueprint Interfaces | Unreal Engine Documentation.

However, another way you could do this seems much closer to what you’re used to. I actually had to just try this out myself because I’ve not used it yet (I live mostly in C++, so this was a fun excuse to learn!): Event Dispatchers | Unreal Engine Documentation

To try out your example, here’s what I basically did: 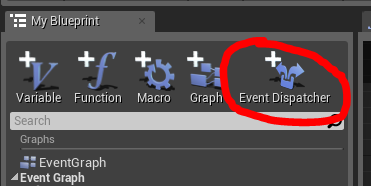 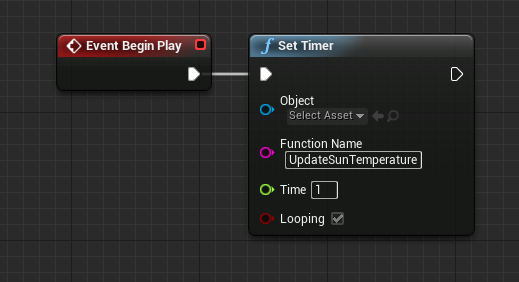 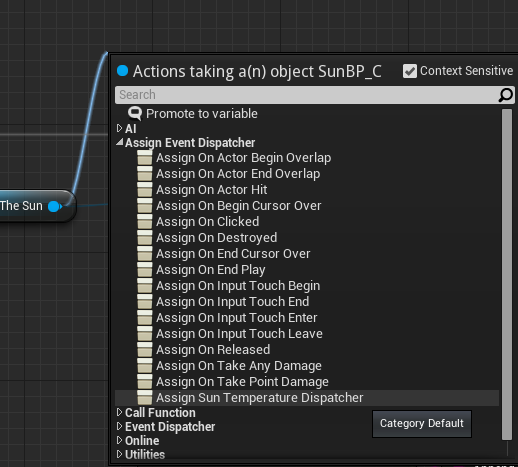 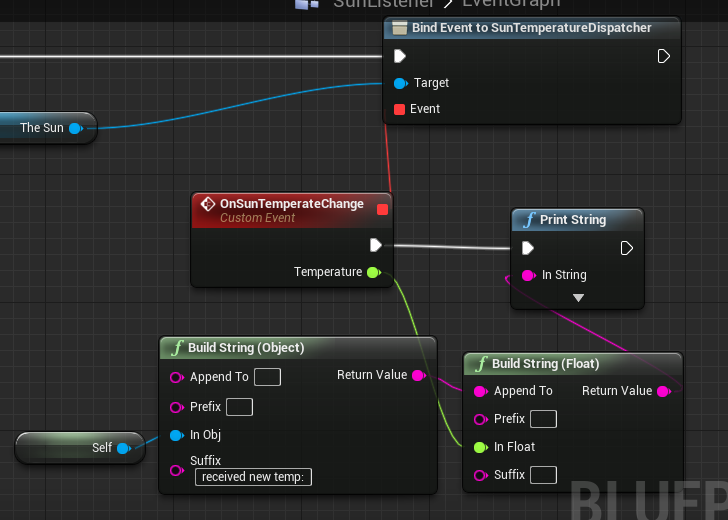 Hope this helps! I’m definitely not a blueprint expert, so there may still be some other better ways to do this too!

Thanks for this in depth reply. I will start building your example right away!

when finish, can you share the performance of the 10000 objets?, for shake of curiosity.

when finish, can you share the performance of the 10000 objets?, for shake of curiosity.

…need to figure out step 2. Global ref to my sun object

Must be doing something wrong. I crashed my Editor 3 times (did the auto report)

And I get this error: 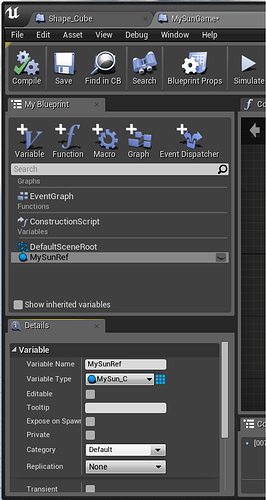 I not sure but events in Construction look to me rare.

I not sure but events in Construction look to me rare.

As far as I can tell I did not put it in the Construction Tab of the listner object
(or did you mean the GameObject; I only put in the Ref to the SunObject)

But maybe I’m missing something with this “GameObject”

Must be doing something wrong. I crashed my Editor 3 times (did the auto report)

And I get this error:

Uh oh! Ok, I’ll try to get someone from the blueprints team to come in here and make sure I didn’t steer you wrong! In the meanwhile, maybe there’s some diagnostic stuff we can do to see what’s going on:

Apologies for the difficulties and hopefully we can figure out what’s going wrong, or if I accidentally misled you!

Can you post your crash logs, so we can try and help you out? Thanks!