Bright spots in reflection... with no light source in that actual bright spot... why?

Bright spots in reflection… with no light source in that actual bright spot… why?? I actually have these all over the place in my scene, but here is a screenshot of 1 room.

See the screenshot… it makes no sense… worst part is these reflection bright spots are so overblown that i get a halo effect coming off them. 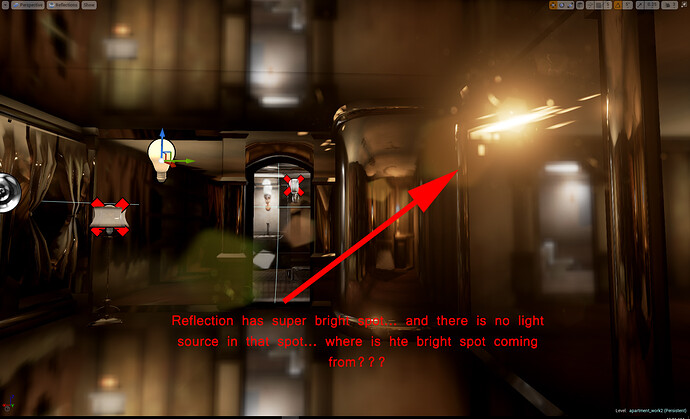 This issue has previously been reported with UE-19818 and can be tracked here: Unreal Engine Issues and Bug Tracker (UE-19818)

This issue first started with 4.8 and is found when using a reflection capture with a static light source. Originally the min roughness would disable the light from being visible in the reflection, but there was a change that caused this not to be the case any longer that was part of the refactor in rendering optimizations. It’s an unfortunate artifact for the moment.

Thanks, but whats curious is it is not just doing it at static light sources… for example that position in the screenshot has no light there at all… Still the same bug?

With the screenshot your provided that is the same bug. I can tell by the star pattern on the light from the reflection. You have the static point light directly next to this that would be one shown.

I guess what im trying to say… whats odd about it… that that “light reflection” should be on the opposite side of the room… its out of position.

In fact the vast majority of them in my level are out of position to the point that sometimes its hard to track down which pointlight it could possibly be.