BlueprintNativeEvent not showing pins in the event node in the graph editor?

Are not the input and output parameters supposed to show up in the Blueprint Graph Editor if I declare a BlueprintNativeEvent like so? For me, the event does show up, but I never see any pins no matter how I change the C++ code. I see only the Event node with an Exec pin and that is all. I’ve closed the UE4 editor and restarted it, clean compile, tried creating a totally new blueprint derived from my test pickup class, but there is no change.
If I just create the event in the blueprint editor, I can of course add inputs to the event and it’s fine. This problem I’m experiencing is that the editor seems to not be picking up my C++ parameters from code.
Am I missing something?

Here’s the simple test code in question (just to see what pins show up on the event node in the graph editor):

With the code you have now, you should be able to implement the function from Blueprint, like in this picture: 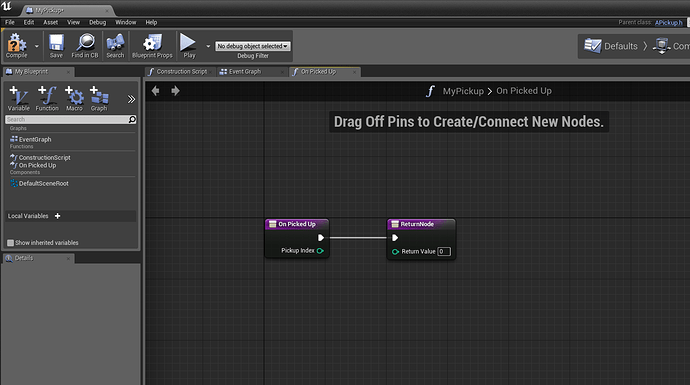 But you won’t be able to call the function. If you try to find it in the ‘add node’ dialog, it will come up missing: 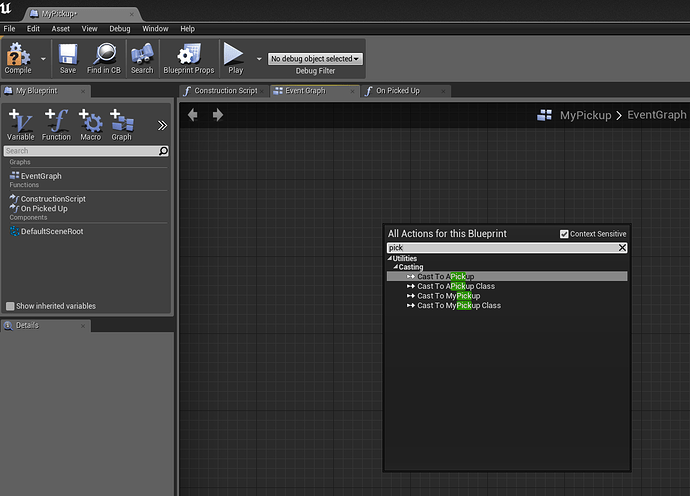 That’s because you’ve only marked the function to be implementable by Blueprints, not actually callable. You need to change your function declaration to look like this:

And now you should be able to call it from Blueprint: 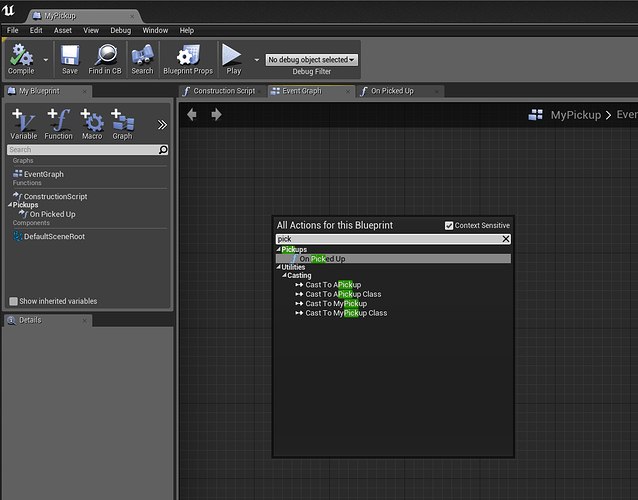 Make sure you close the editor before rebuilding from C++ to make sure the module was reloaded correctly.

The C++ event should be showing up as the ‘red’ colored event node in the editor the same as if you chose something like EventActorBeginOverlap or EventBeginPlay. This is an event that can be fired in C++ code and used in the event graph of the blueprint. I am getting the red OnPickedUp event as I’d expect, but there are no pins mirroring the parameters I added in code as shown above.

BlueprintImplementable and BlueprintNativeEvent are for talking to blueprints from C++ to blueprint direction. BlueprintCallable is for going from blueprint to C++ direction and so is not what I’d be after.

With BlueprintNativeEvent, the blueprint can override the C++ function if it wants, but if it doesn’t, then the C++ code is what fires instead as the fallback default behavior.

Perhaps you phrased your question in a confusing way. If so, I’m not really sure what you’re trying to do or what your problem is.

With the code you posted, it’s not possible to get a red event node. I’m not sure what you’re seeing on your screen.

It turns out I was having some strange compiling issues and UE4 was not reflecting my code changes. I got that sorted and now I get the above as you described.