I’ve been trying to get my Blender model to turn into a .psk but encountered countless problems doing so.

I give up on trying to fix it myself, so I’ve attached the .blend here in case anyone else uses Blender.

Ok, after some finagling, here is a zip with a new blend, psk, and psa files.

Your bones are now bones again, IK is working, and there’s a super short test animation. One of the things I noticed when troubleshooting the model in 3dsmax was that the material opacity for his head and hands was set to zero, which could explain why they seemed to disappear. The geometry was still there, they were just invisible. That’s something I may have fixed, but just be aware of it if it happens again.

There may still be problems. The psk file imports back into blender with an armature which is rotated in x and y 90 degrees. However, I also tested them in max, and they worked fine. I have no idea what that means, but it may be a bug in Blender’s psk importer. In Blender, at least, that’s why your mesh explodes when you try and test it. I don’t currently have udk or any mod-able udk game installed, so unfortunately I can’t do any testing further than that.

First of all, thank you so much for helping! Second, the animations still aren’t working right, so it seems to be a problem outside the model. If I load the .psa from Killing Floor, which I plan to use, it just bugs out, causing the same exact distortion. This is the file. Any suggestions? 0h, and I’m using 3DS Max now, if that’s any help.

I think what’s happening is that the bones are importing at odd orientations. Even if you automatically reorient the bones on import, a significant number of them remain stubbornly out of place. When you import a psa, the weighted geometry snaps to the bones and you get things like his head twisting upside down, or in the case of some of my later experiments, a gooey puddle with a tail sticking out of it.

I’m starting to lean toward there being a problem with the rig. Just for a sanity check, delete the current rig, get a new rig from the game, quickly parent the model with automatic weights to the new rig, export it to psk, then test a psa animation. Beyond aligning the rig to the mesh, try not to modify it. It’ll be interesting to see if the mesh still explodes after that.

My model is asymmetrical and won’t automatic-weight. I’m also not looking forward to redoing my rigging.

EDIT: I’ve confirmed the problem. It’s the skeleton. I imported the test .psa into Killing Floor SDK. It wasn’t pretty. 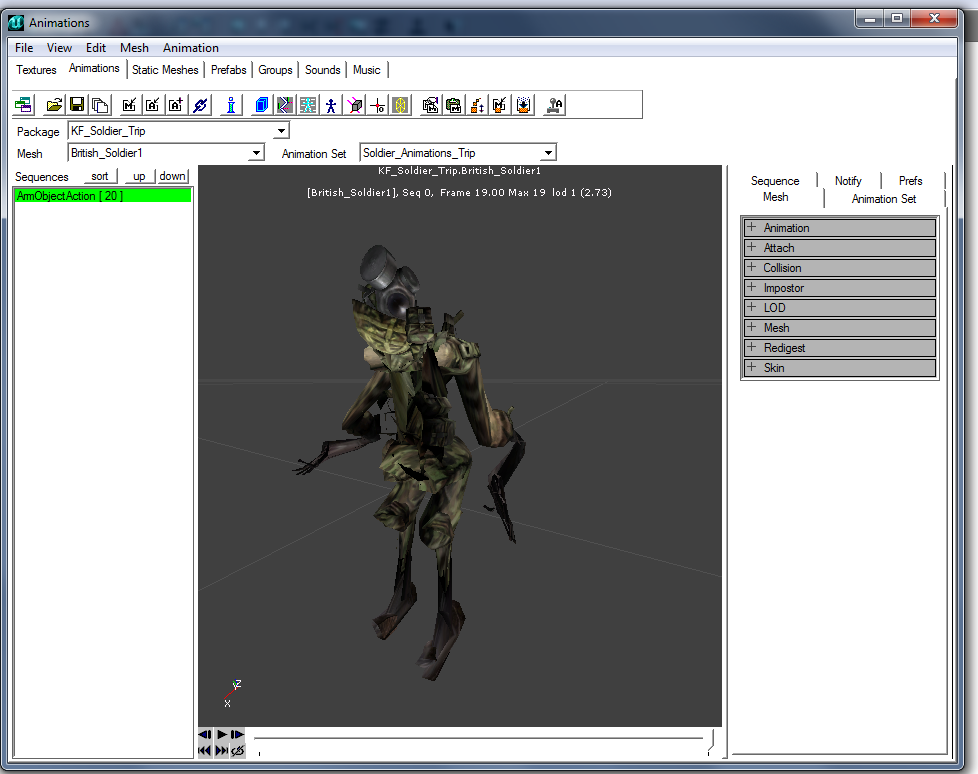 Sorry for double post. I’ve isolated the problem, but don’t know the fix. When a .psa or .psk is imported into Blender, something breaks and the bones start behaving…very strangely. They look normal, but they’re all wack.

How is it possible to successfully export psk if they are screwed in blender?

Sorry for double post. I’ve isolated the problem, but don’t know the fix. When a .psa or .psk is imported into Blender, something breaks and the bones start behaving…very strangely. They look normal, but they’re all wack.

It is possible to export psk (and psa) from Mass Effect 3 and they import (apparently) perfectly in Blender or 3ds. Upon editing and exporting to psk again you can import the psk into UDK and successfully convert it to a upk file that can then be imported back into the game and it works fine. How is it that Blender seems able to import such a psk just fine, even export in a form that works in UDK and in an Unreal 3 game like ME3, yet have this issue? Is UDK somehow automatically fixing any bone problems introduced by Blender?

Any psk exported by 3ds will import into blender just fine as well, but blender is incapable of importing its own psk files, but 3ds max CAN import blender psks without the issues blender has. It seems incomprehensible that this would be case if there is something inherently screwed up by blender psk files.

With some twists and turns (literally) it is possible to export fbx files instead of psk from Blender and they too will import into UDK just fine. Set Y-up and Z-forward, set yaw to 90 degrees and export fbx instead of psk. It is MUCH faster than psk export but while the resulting model looks fine in UDK, upon saving as upk and importing that into Mass Effect 3, you can run into issues that appears to relate to messed up skin normals.

Sadly, it is hard to take blender seriously when it has so many problems exporting and working with many different animation/gaming platforms.

As for the rotation of bones after importing blender’s own psk back in, couldn’t you simply rotate 90 in the two needed directions to get the mesh and bones to properly coincide, then apply rotation, scale, and position to the skeleton and go from there? Painful and should not be necessary but it SHOULD work.

On another note, I have not been able to get ANY psa animation to work properly in Blender (2.75). As soon as I activate any animation, the mesh that the animation is to act upon disappears and is nowhere to be seen so you cannot view the animation, skin distortion or not.