This has to be a bug.

I’ve got a service running on a selector which periodically does a Sphere Overlap check to determine if any actors are in a certain range of the player.

I’m trying to set a Blackboard Key as Bool using the output of this overlap check, and it’s behaving erratically. So, to debug it, in the BT Service which sets the blackboard key, I’m also Print-Stringing the value of that bool just before setting it to a Blackboard key.

This is the result. I took these 3 screengrabs at random times during a single playtest. 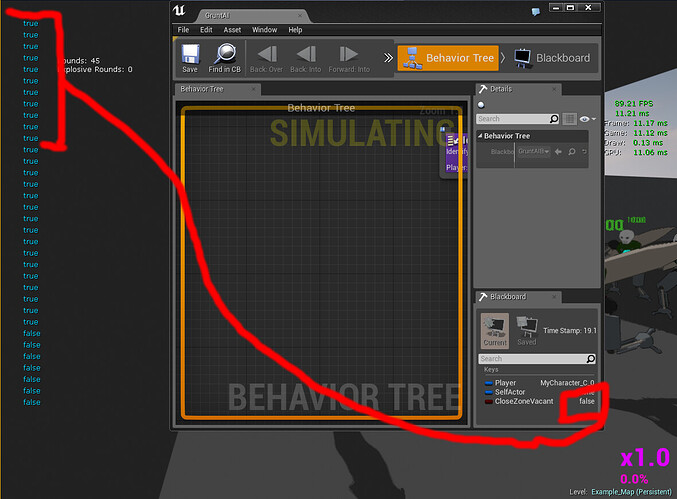 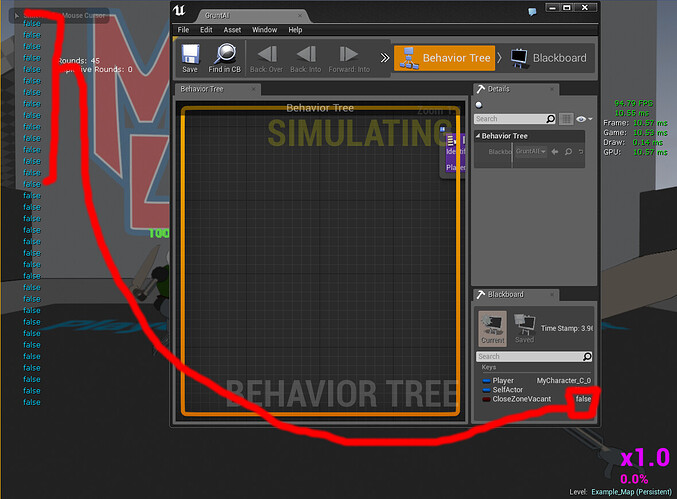 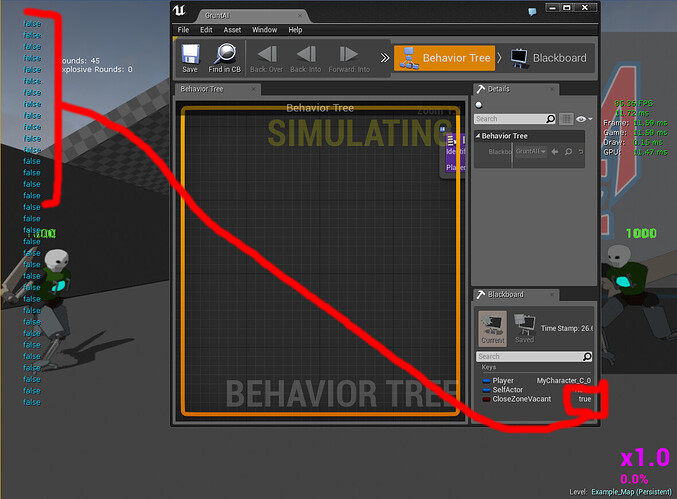 The blackboard key seems to more or less do whatever the heck it wants to. Sometimes it lines up with the bool it’s being fed, sometimes it doesn’t.

Just for reference, here’s a screenshot of the relevant portion of the Service in question:

The string is being printed IMMEDIATELY before the Blackboard Key is being set, nothing is changing it. The Blackboard value itself isn’t set or even LOOKED AT anywhere else in the entire Behavior Tree (since it isn’t working); all it does is sit there in the “Simulating” screen, not getting set like it should.

I have this issue too.

I’ve been trying to debug this and it SEEMS, at least on my end, that the problem is the way Blackboard values are set.

When a Service is running on a selector node, it performs the desired tasks at correct intervals, which manifests itself in correctly-printing strings. i.e. the tick fires off the “true” or “false” string exactly as it should.

The problem here is that if the service is trying to update a blackboard value that is relevant to child leaves/nodes/whatever, it cannot do this, since it must wait for those nodes to complete before it can change the value in question. It seems like a Service should be able to do what it does all the time while a selector/sequence is active (otherwise what’s the point?) but in fact it can’t change blackboard values except between tasks.

don’t have time to look at it now as the 4.4.3 has messed up my entire project. its a long time ago now but i did some sort of work around to get things running at the time. if i remember it was something like set the BlackBoard Values in the BTService and set the sevice interval to 0.1 and Random Deviation to 0.1 then add decorators to the Tasks and set them to abort self.
ill have a look when i get running again.

I am having a bit of trouble understanding exactly what you are trying to accomplish. I have a few questions:

If you have any additional information that could help us to reproduce this on our end please post it as well. Thank you and have a great day!

RythmScript is correct. Here’s what mine is doing.

It’s easy to reproduce if you create a child task that never calls a ‘finish execution’ node, your service will never update the blackboard key. 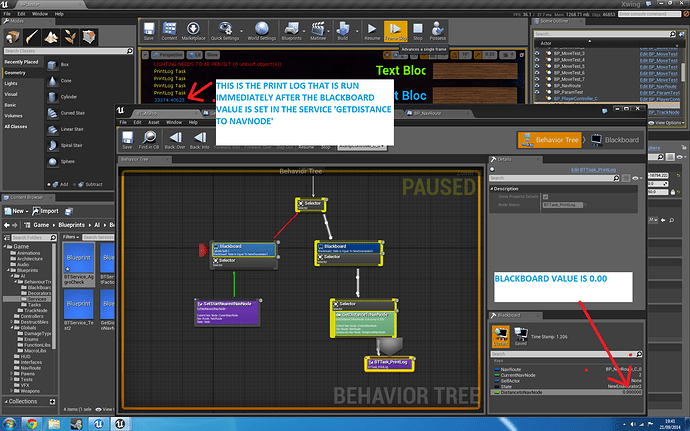 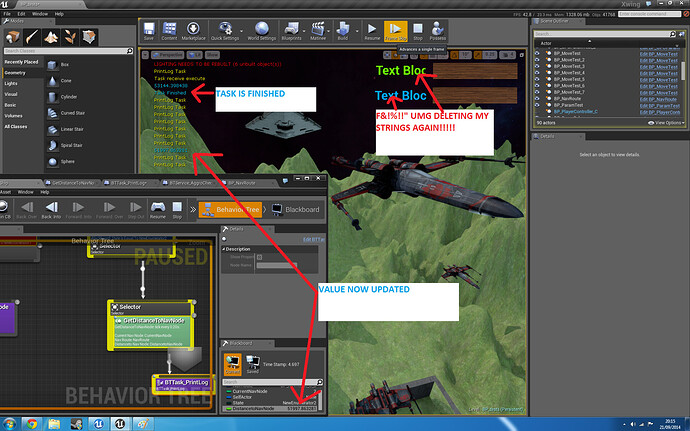 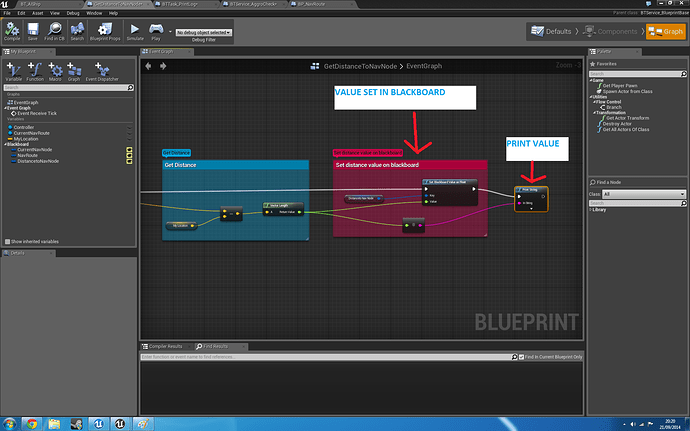 Think I’m going to stop using this and UMG till it’s not experimental anymore. Have to do all this testing software stuff at work all week the last thing I could do with on a weekend is another day of bug fuelled confusion, could send a man insane

Yes, thank you, that’s exactly right. I was able to work around it by giving the selector multiple children (using a near-zero wait node with a conditional on it) to force the observer to call checks to the BB value which seems to cause it to refresh.

@AdamDavis Have you managed to reproduce this in house yet? If not do you need any assistance from me?

I’m with you on that one pal, it waists so much of my time.

I am still looking into this, unfortunately it has been difficult to reproduce on my end. Does anyone have exact repro steps that would help in causing this to occur on my end? Thank you!

Make the AI’s tree do this:

Did you try this simple reproduction?:

“It’s easy to reproduce if you create a child task that never calls a ‘finish execution’ node, your service will never update the blackboard key.”

It might be a bit more complicated than that I suppose I might be simplifying the issue. I’ll have a go creating a one branch behaviour tree when I get home with this conditions.

Surely even if the task is running but never finishes executing, the service should still be updating it’s values, isn’t that the point of services, to update values whilst lower branches/nodes are running or am I doing this all wrong?

I’ll be home in a couple of hours I’ll create a single branch tree and post the results.

I’m not sure what you mean by “I just saw the finish execution node wasn’t hooked up” Do you mean on my screenshots? That screenshot showing the blueprint for ‘GETDISTANCETONAVNODE’ is the service not one of the tasks if that helps

Right I’ve worked it out, looks like the value is getting physically updated but it doesn’t visually update in the behaviour tree therefore giving the impression that the blackboard value is not being updated when it actually is.

So basically the service does update the blackboard values as intended, it just doesn’t show it until the task is finished

Not sure if that’s the intended behaviour or not…

I probably didn’t explain myself very well which hasn’t helped, I also just realised I missed something very obvious in my initial testing…print the value of what the actual blackboard is, not just look at what the screen is telling me

So here’s some screenshots to explain the problem and an explanation of the service and task blueprints.

-Has an int variable called ‘LocalInt’ that every service tick gets incremented by 1.

-has an int variable called ‘TriggerLimit’ which is set to 100

-Prints a string that tells us the task has completed.

In the screenshot ‘Behaviour Tree - value not set’ you can see that the Behaviour Tree blueprint is showing the ‘BlackboardInt’ value as ‘2’. I don’t know why it’s 2 that make no sense either to me I’d have thought it would be 0 or 1 but nevermind - either way it should be the same as the print log “Service Tick executed, Blackboard int is: 34” as that is printing the value directly from the blackboard with a ‘get blackboard value from int’ node. So the actual value in the blackboard is at 34 but shows in the blueprint editor window still at 2. 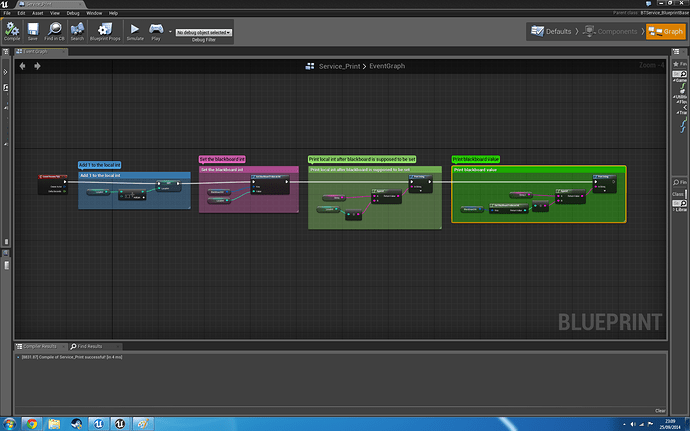 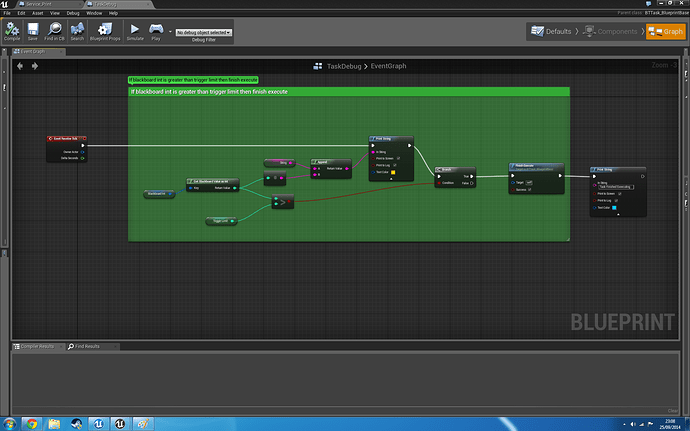 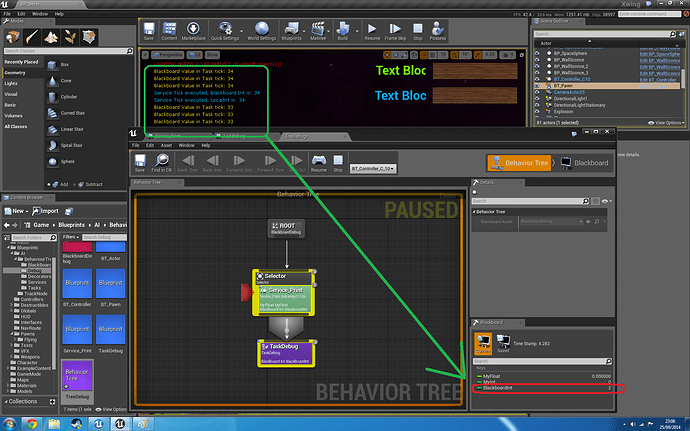 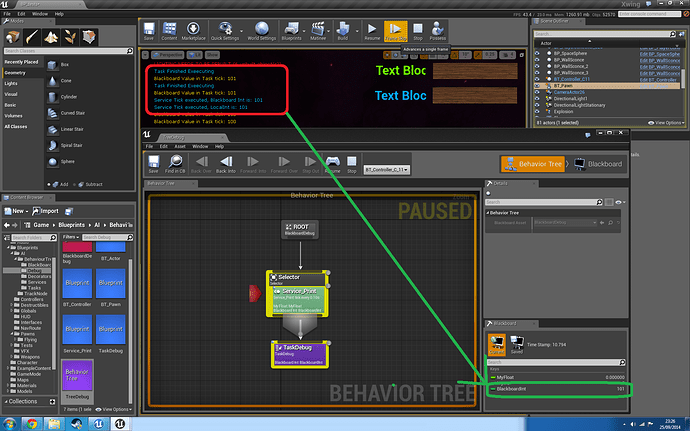