Apologies if I am missing something obvious, but I am trying to architect my game and in my experience I have had something like an OnlineManager to manage things like connections, notifications of server going away, players coming online and so forth. I am using an external system to handle much of the work that an online server would handle, but I have to pump/update it periodically to make sure data gets sent and consumed in a timely manner. The documentation suggests using an actor’s tick() method, which I think would work, but I don’t really see my OnlineManager to be an actor.
I have looked at the GameInstance and GameInstanceSubsystem, but these do not have a built in tick or update method, though they have the lifetime I am looking for (create on game start, destroy on game end). I could make it am FTickableObject, but then I am not sure who should own it. I could subclass GameInstance and then create it in there, but again this doesn’t quite feel right.
Ultimately, I would like a system that I can tick at a specific rate, and will have the lifetime similar to GameInstance and ideally be owned by that class as well. Perhaps a GameInstanceSubsystem that creates my OnlineManager, then schedules a timer to update it on the cadence I want.

Does anyone have a much better approach or is there some system or pattern in Unreal that I am not aware of that would make this trivial?

No takers? Any advice here would be helpful if you have any experience.

I could make it am FTickableObject, but then I am not sure who should own it. I could subclass GameInstance and then create it in there, but again this doesn’t quite feel right.
Ultimately, I would like a system that I can tick at a specific rate, and will have the lifetime similar to GameInstance and ideally be owned by that class as well. Perhaps a GameInstanceSubsystem that creates my OnlineManager, then schedules a timer to update it on the cadence I want.

Does anyone have a much better approach or is there some system or pattern in Unreal that I am not aware of that would make this trivial?

The UE Design Pattern that I personally would use is this

My answer assumes you have a Lobbly level at the very least, or you are talking about managing your connections in a living game, and knowing when players are joining and leaving, or in a lobby level, coming online like you mentioned.

But I tend to favor, just like you, designing my own systems and connecting to UE architecture only to get things up and running.

So I would launch my own Actor SMROnlineManagerSubsystem from GameState and let GameState do its own thing.

In my multiplayer games, GameState is the place where I create every Actor Subsystem, of which I have many, and then each Actor BP divides up the work and manages the load of my entire Game world, and all the people in it.

I use GameInstance only for detecting network connection issues.

My model does mean that all subsystems get re-initialized each time a level change occurs, but that has to happen since the actors are actually being destroyed, and I tend to feel that:

if you can’t frequently create

You shouldn’t be using them in the first place

That’s my first test of system stability, especially when clients can come and go at any time, bringing up and tearing down all my systems each time they join/leave,

“Can I rip this thing apart and put it back together as often as I want and it still runs with no crashes?”

Thanks a lot for the thorough explanation. Upon looking at the GameState class, I believe using it would cause issues for my specific use case. I am looking at a solution to handle things outside a specific level of the game, like connections to external services, telemetry, friends presence, notifications, etc. To create all these connections each time the level changes would lead to a lot of problems as well as gaps in coverage (what happens if a friend comes online while the level is loading and I don’t receive the notification).

With this specific use case in mind, handling things not related to actual gameplay but to the human player’s connections to services, would you change your implementation choice or still use a GameState BP?

Thanks so much!
SMR

With this specific use case in mind, handling things not related to actual gameplay but to the human player’s connections to services, would you change your implementation choice or still use a GameState BP?

The part I was puzzling over is that you want a tick function, but don’t necessarily have an active UWorld, because levels could be up or down.

I am very happy to report

That GameInstance can Run Timers That Last In-Between Level Changes <~~~~~~

Yes!!! These Timers Will

This is Big and Great News!!!

Especially for Your Goals!

Somebody at Epic was

when they did this part involving timers in GameInstance!

Here’s my GameInstanceBP (no C++ Code) 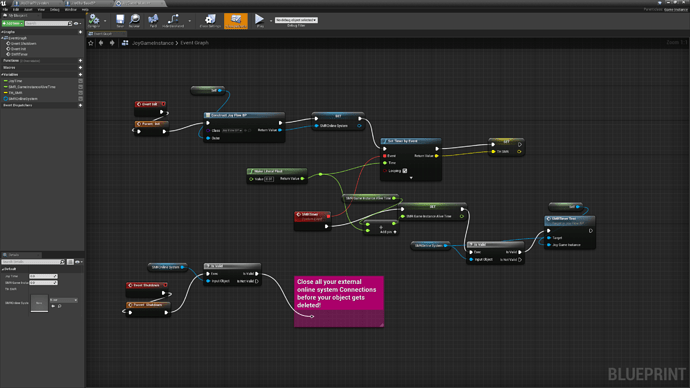 Here’s my UObject, basic C++ of which is below: 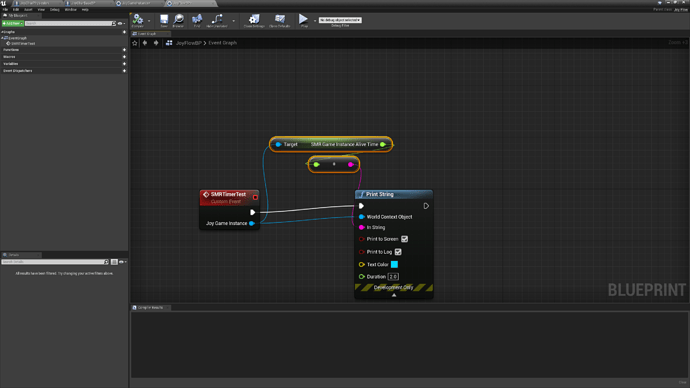 Creating a BP of a UObject with a C++ Core

The above code allows you to create a BP of the UObject base C++ class. 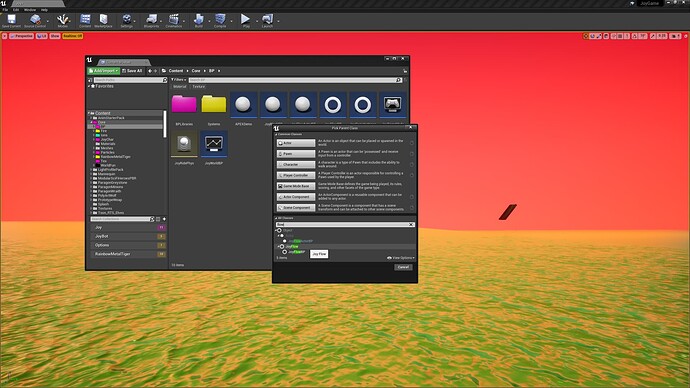 So now you can do all your

(including delegates, which are so easy in BP and so necessary with any kind of async response system like Online Systems)

can be in the C++ class I showed, the template code with BP-Callable functions, so you can do the

Flow of Logic in BP

, while the C++ does what it does best, connecting to external systems that you wrote that use C++.

As You Know (writing for benefit of other readers):

GameInstance is first and last, the Beginning

of Every UE Game

The issue is ticking during a level change in my mind…

that is stable during Level Changes

Meaning, GameInstance is having its UWorld updated as Levels change, so I can print out the float without concern of what level’s UWorld GameInstance is using, it is auto-updated for me by

The Awesome Unreal Engine Devs who made GameInstance So Robust! 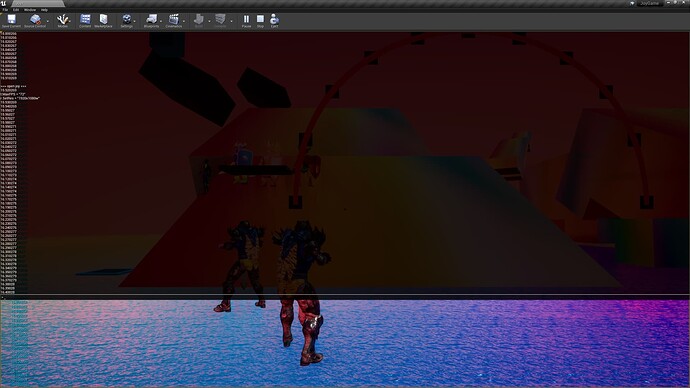 As you can see in the console:

I changed my current level multiple times, and the Counter kept steadily increasing of Total GameInstance Time Alive (as opposed to GameState and GameTimeSeconds, which would only report the time for the current level, resetting to 0 with each level change)

So that means, @SMR, That you CAN track the total time your entire Game setup has been alive, even between level loads,

The Total Lifespan of GameInstance Object Can Be Known With One Timer!

And of course, if you know the Total Time Alive of Your Game Instance, you already have everything else,

Because as long as that float keeps increasing, you know your Systems Are Live!

Of course, I could only see the print out of the current time while a level was loaded, because it prints to the viewport

But the great news in

is that means you only have to connect to your external architecture once, inside the BP or the C++ Code of your UObject (My template code for you above)

Which was your main focus!

My point is, your SMR Online System UObject created by GameInstance Init,

will last as long as GameInstance,

because Your Custom Object, with all the Ease and Speed of Blueprints, is not dependent for its lifespan on anything other than the UObject reference in the GameInstance itself.

Real Time In Between Levels?

Please note, if you find there’s a gap in the timer during level changes (It looks accurate in my pic, but just in case)

You can use this instead:

Gets current time in seconds.

How Do I Access My OnlineSubsystem Statically, From Anywhere?

I don’t know if this is obvious to You @SMR but for other people’s sakes:

Now that your UObject is live, created and ref stored in Your GameInstance, you can create a

, anywhere in BP, by creating a BP Function Library 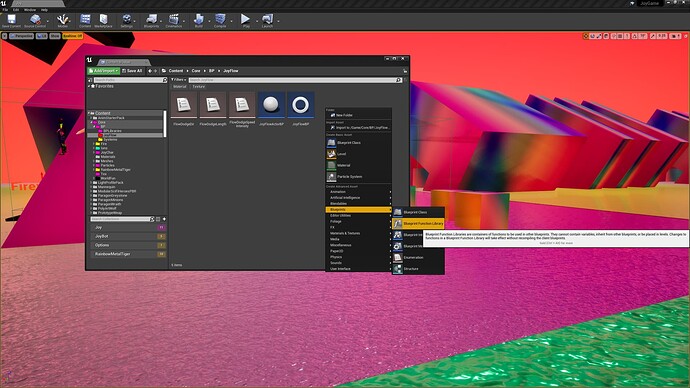 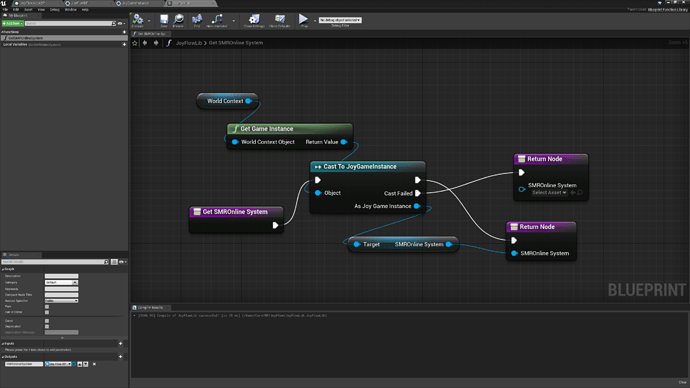 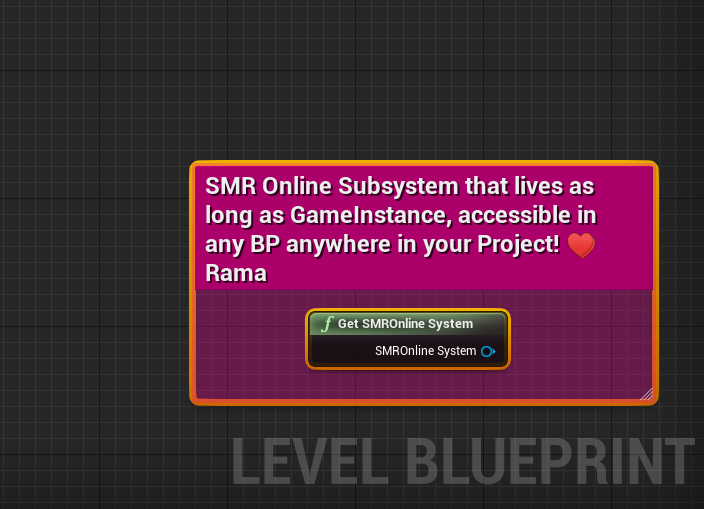 Now, with 1 node, you have access to Your UObject Online Subsystem that:

2 Likes
Should I use plugins or plain objects inherited from UObject for a numerical solver?
SMR January 22, 2022, 4:23pm #6

Wow Rama, now that is a reply! Thanks for the work you did on this, you definitely went above and beyond. I am glad I was on the right track and seeing your analysis gives me that confirmation this path will not lead to any obvious errors out of the gate. If I do find anything crazy that could help others, I will try to update this thread!

Victory to You @SMR !

(sorry I missed your response, if you use @ username I will get notified)