Behavior tree not working on "SpawnAIFromClass"

After spawning ai character using this “SpawnAIFromClass” behavior tree stopped working? i am using “Pawn Class” (purple color one) as AIcharater reference to spawn the character in game… as its asking for that\

Would you mind posting an image of your blueprint setup? 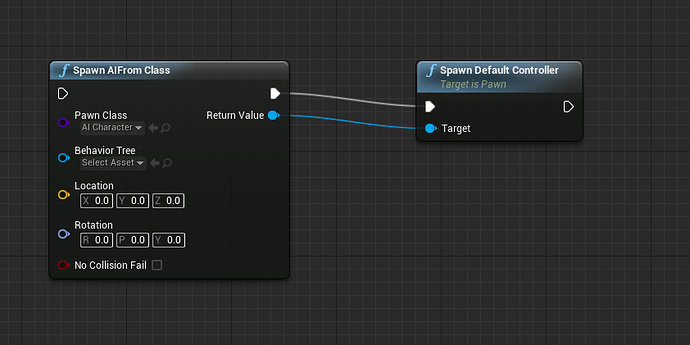 The blue one is the Pawn that already exists in the level. This is something that has already been spawned. The purple colored one is a pawn class. This can be used to spawn a pawn. After the spawn action a blue return value is provided. That’s the blue pawn.

Its alright i already gave up on this idea and used “spawn actor from class” and setting its default controller to its AIController made it worked!

Thanks for taking interest in solving my problem though!

thanks! i’ll try that also.

Oh now i get it. thanks for clarifying this…