So I’m working on a 2D game and I’m trying to take advantage of the behavior tree system in UE4 for my AI but during my custom move to task (Can’t use the default one because I do not use a nav mesh) the blackboard decorator refuses to abort. End result is once the AI starts following the player it never stops unless it reaches it’s target finishing the movement task,the decorator is set to see if a “sees target” bool is set or not, the bool it’s set to is functioning properly, the decorator just refuses to actually abort whilst a task is in progress. In my mind I should be able to get this to abort, so I’m starting to think this is a bug.

I can’t believe I didn’t see that task last night, thanks for mentioning it! also thanks for the rest of the info, my AI is back on track I appreciate it! (You guys are just the best).

Currently I’m in the process of manually aborting it but I don’t anticipate any trouble.

Here is what I have thus far and I still can’t seem to get it to abort, I’m sure I’m doing something wrong. 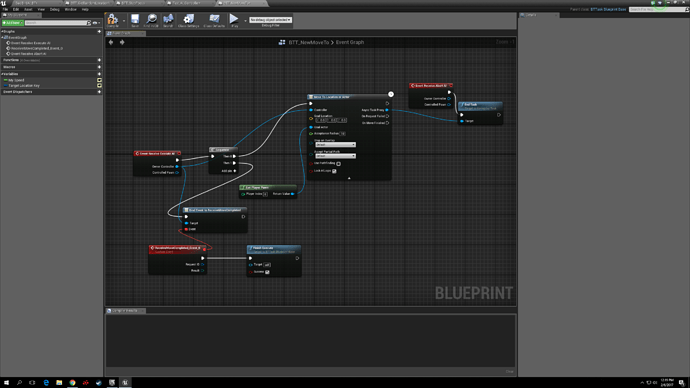 For now I’m just using the Move Directly to and that aborts properly.

EDIT!!!: Recently I ran into an issue that prevented me from using the Move directly toward task https://answers.unrealengine.com/questions/677843/add-impulse-not-working-on-ai-that-uses-the-move-d.html.

Forcing me to find an actual solution to this original problem and that I did.

So turns out folks, you see that “Lock All Logic” boolean on the “Move to Location or Actor” node? Un-checking that solved my issue entirely and the Abort event now fires like normal when the BT tells it to.