Beams Tutorial Section 1 - Navigation inside Gamethrad:
Best thing is to*** look at my last post***, to see progress. 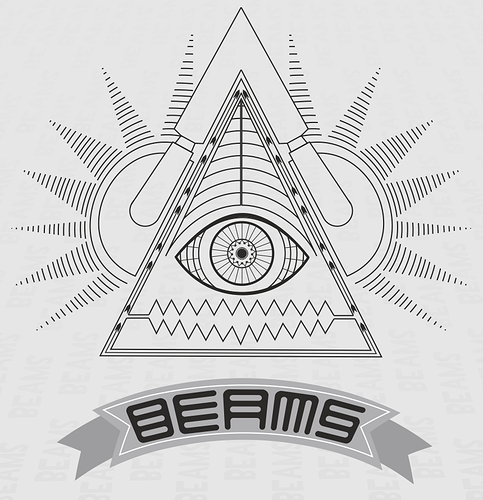 One sideaspect of beams for me is, to generate nice pictures.
No camtrack, editor- playrec and only external cutting/inserting logo as editing needed.

Destruction and the creation process in Beams ^^ 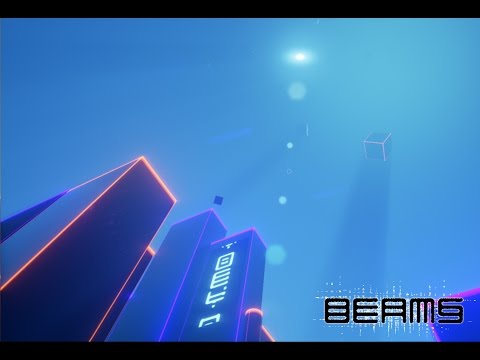 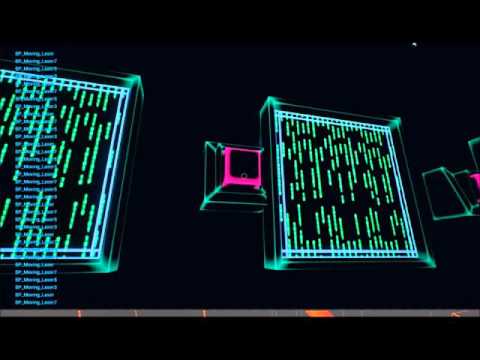 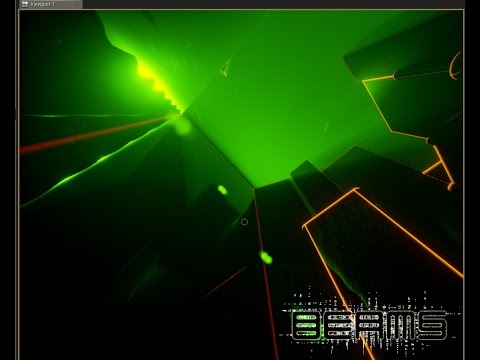 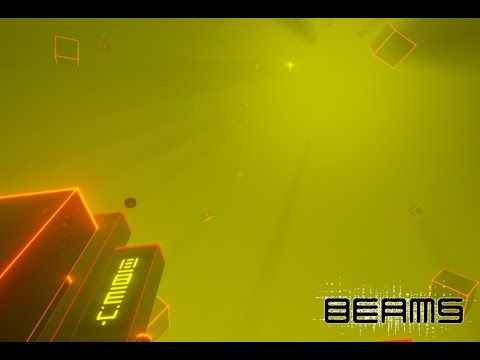 I love this high tech art
Even though, I do not quite underestand, what is the goal?

I love this high tech art
Even though, I do not quite underestand, what is the goal?

Thank you for your kind words.
I still have fun with it, my kids too.

I have core mechanism working, but i tell here not now(!) everything i implement.
Soon i do a gameplay sneak peak of one or two gamemechanism, but i sure show not all, before Demo is launched, and even then i hold back some content first.
I like to have one step as backup minimum failsafe.
Goal…
There are beams and blocks and walls (specific) you can stack and grab blocks to reach switches, or new rooms, but with a small twist.
You have to use platforms to reach your target and they could be “influenced” by the blocks.
Ok you stand there and stacking/arranging blocks of different size to reach your goal, but when you used to many blocks, or used to much time, a fresh function will arrive, it is a “neutral thing”, but the third function is foe for function two and function two is completely peaceful, but the third is not.
Ok while you are in a limited space with all your creativity upstacked blockstuff, function two is coming but better look out that function two is not near your “bridge” while function three tries to rape function two.
Massive impact, “bridge” gone.
Restack again or try to avoid that the function 2 is near your stuff while impact.
Leave zone before, but leaving could be a problem if not wisely planned.

I found some very basic mechanism(nothing new) and i build up the game around them.
When you can grab not only blocks, perhaps you can build things with it…
My ideas are only limited by my knowlege. ^^

Here is a video about “function one”. Tell me what you think.

Very intriguing, I especially like the visual direction. I’ll be keeping an eye on this one. =)

I did an Introtest with permission of Björn Torwellen, but it is perhaps a bit hard, what do you mean? ^^
I want an interactive video, movement locked, mouse free, feeling of falling into a tunnel. 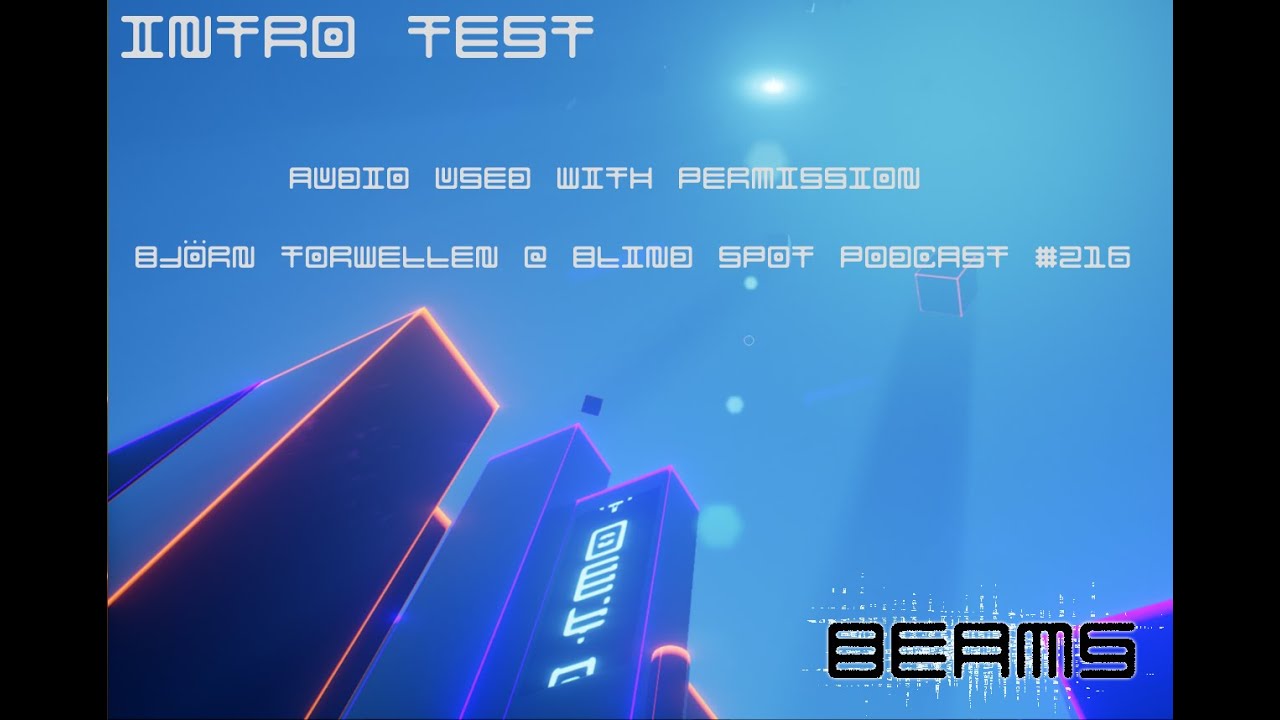 Thank you very much, i decreased it 50%, but i am still lost in the possibilitys of post processes, but in a positive way. Later i want to bind them to effects, like falling, hit and other stuff, or the user could choose his favorite shader stuff.

Very intriguing, I especially like the visual direction. I’ll be keeping an eye on this one. =)

Thank you very much too.

Here a new “gameplayvideo” ^^
Falling sound full length first, but you will perhaps never hear it to the end, in short passages it is ok, in long passages you will be dead perhaps (not sure about that for now).
There are random spawned things coming out of the boxspawner.
Those things are friendly, but will be attacked from something like a security station/weapon(setup working), and there are security things working against you.
Impact changes physical state of your builded blocks and blow them away (radial force to small now).
I changed some postprocesses, and some of them i really like.
Free demo planned around new year, because i need feedback of some things and i want to know, how ppl cheat the system.
Its a function i want, that you can use your creativity to solve puzzles, create new routes, aside my “planned” way.
I setup some controlling functions, that you not only build a stair out of blocks, to reach target.
You can grab, replace spawn most usable objects in many different variations (cubeshape only for now).
I hope to make some points at Beauty, immersion, intellectual problem solving, physical activity, and discovery.
For the demo, i release only small part of still created level, i bet i have to optimize controlling functions.
Tell me what you think.

Update with basic ai.
I have much fun doing that. ^^ 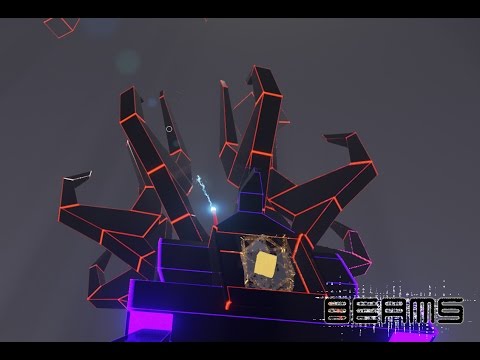 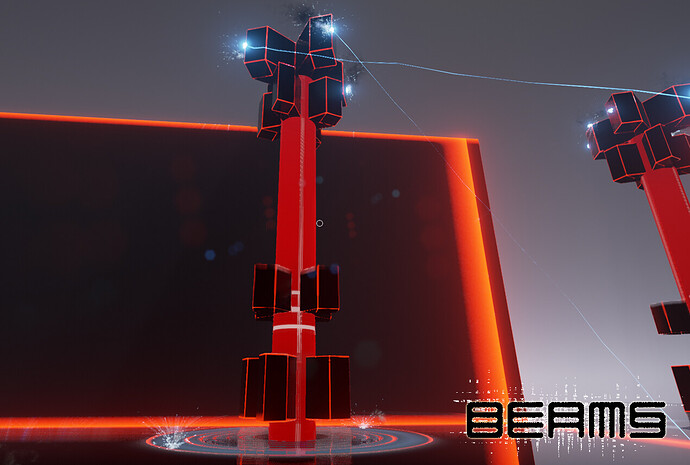 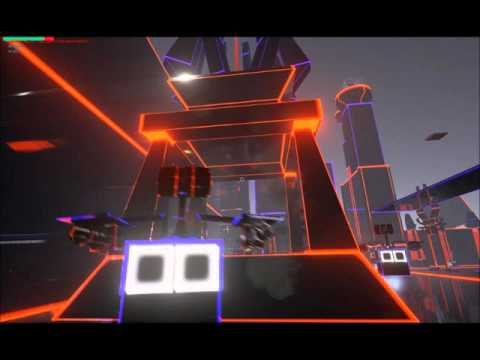 Edit: Sry i forgot again, that you can follow the Beams project on indie and every update is a small update article there, for those who interested.
I am not good in such things, like twitter usage and stuff and all this writing, posting editing is eating much of my usable freetime, but it is fun too, stay tuned. 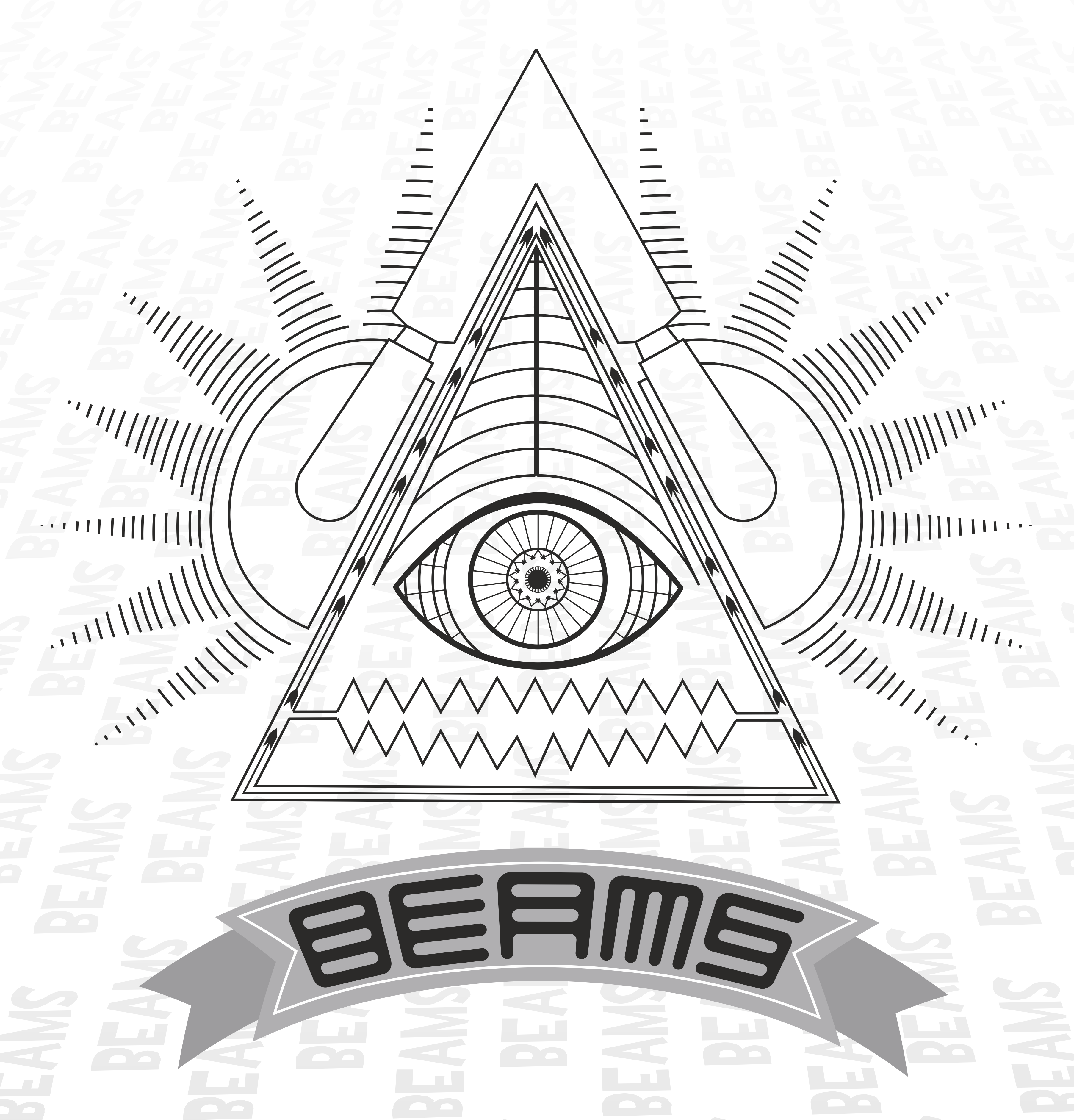 BEAMS A FPS game with some shooting, jumping and puzzles!

Next will be basic lipsync for a modular headthing.
Ue info is a bit thin about that, i am thinking of a pure timeline setup, with grouped shape keys / morph targets. 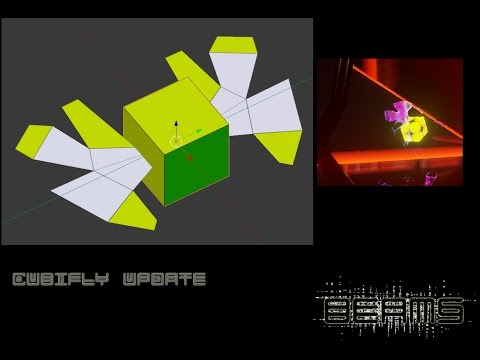 UFO and Illuminati Proof in Beams!
I had really fun doing this.
Some particles and materials are still placeholders, but the sounds not, they are perfect! ^^
Got this morphing thing working with a dazillion of timelinestuff, was great to learn.
It is a gameplayelement in my little game. 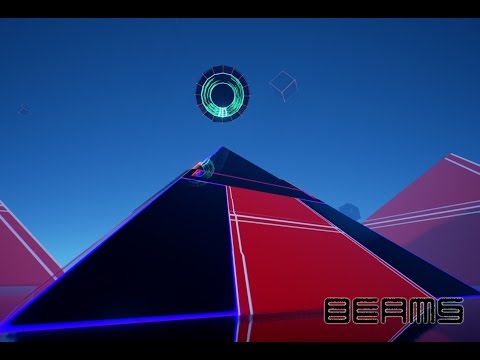 I am very happy with the result, because i did it on my own and i like such stuff.
Here are the links to my reference pictures, which “inspired” me.

Forget about details for now. I make details and anything modular.

For now, my experimental map has without spawned dynamical objects 17.000 tris (complete map), and when all dynamical objects are spawned (maximum cap adjustable) around 2000 objects, the map runs very smooth on my old system, and i hope that it is playable for low-mid-specs too.

I have so much fun doing this and i split the map in pieces. Some parts only standard architecture, and then some scene specific.
For example tech-egypt - plants - pillars - deco - modular scenery assets for the ai (perhaps hats, or different weaponstyles), some decorative other elements.
Reminds me of doing a cubi-santa ^^

I like the creating process to much, i should care more about coding stuff, but that feels not so relaxing for me.(only hobbyist user, which needs something to kick the workload of the standard job, out of my brain).
The thing is, i still have enough (working) content for a demo map, and aside some weird(not unlogic) physics behavior, it runs well.
The map is really big, for now only flat, but will raise up the map soon, to make use of this “cool size” thing UE4 feature.

There is a target/objective to reach, but many options/ways to reach the target.
Have to setup some sort of ai commander to prevent to easy cheating and apply some pain to the player.

Some sort of flying overwatch drone, counting how many blocks you used to reach waypoint 1, and so on.
When the count is >=standard i send you some sort of physical “bomber”, which will change the physstate of your used blocks, but you can defend against it.

In the end i would be really interested, to see how the user bugs/glitches this system.
A very far away target for me, but only if the interest would be big enough, to make a timebased onlinehighscore, added posted screenie after registering. Winners could win an amazon voucher or so.

Even if you call me weird, i even would like to do that, without any positive income through that project, it is planned as longtime hobby so far.
I have other, more expensive hobbys so far.

In this time, where so many fakeprojects releasing cinemtatic kickstart trailers, or trailers which makes you feeling dissapointed, when you play the real game,i feel different.

All these updating posting, contacting stuff takes a big part, from my freetime but in some way i like that.

“Woot wee”, cool stuff is happening.
Really thank you epic and comm, i have so much fun doing this.
It is an old Idea, posted a small article on db about it. 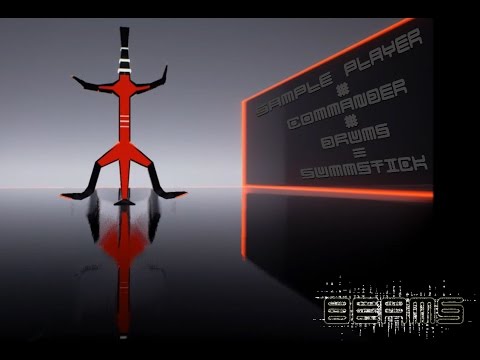 Target is/was to create a basic sampleplayer, which you can influence in some way, and the “harmony” of the used samples,** influences** some surroundings/actors.
Very complicated stuff for me, not complicated to setup one timeline, but so many different curves for morph (float) and sound (event) very much.
This “orchestra” is growing so much in complexity, with each baseinstrument i add.

I liked to play with samples and record own ones, but i have to hold things simple, no difference how fascinated i am personally about one part inside ue4.
For materials the same, so fascinating, could spend my whole freetime there, not even used morph for materials, but that comes later.
I have to decide to using FMOD(learning it), to extend my idea, but i would really talk to someone who integrated and used it, that he can point me directly to stuff, i should learn, but that is only for extending idea.
Basic it is working and i can use different curves to animate and trigger events.

Learned so much and the best is, since first learning steps, it was always fun, never frustrating.
Perhaps i use in the end only two drums, packed into one actor for the beginning.
Here Summstick with Drums (Mumps). ^^ 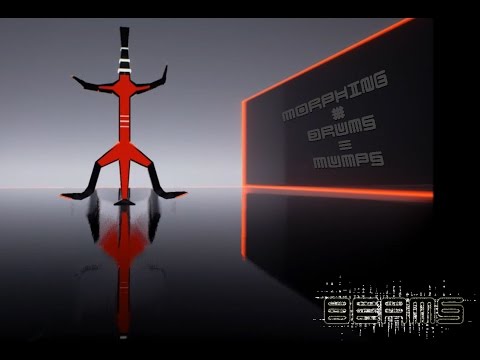 Now i go back to the roots and limit my playground to something like a demomap, with focus on entry level.
Have to learn about slate or UMG next…

Fat dust blowed away from my cheap gfx tablet and painted scene 1/5. 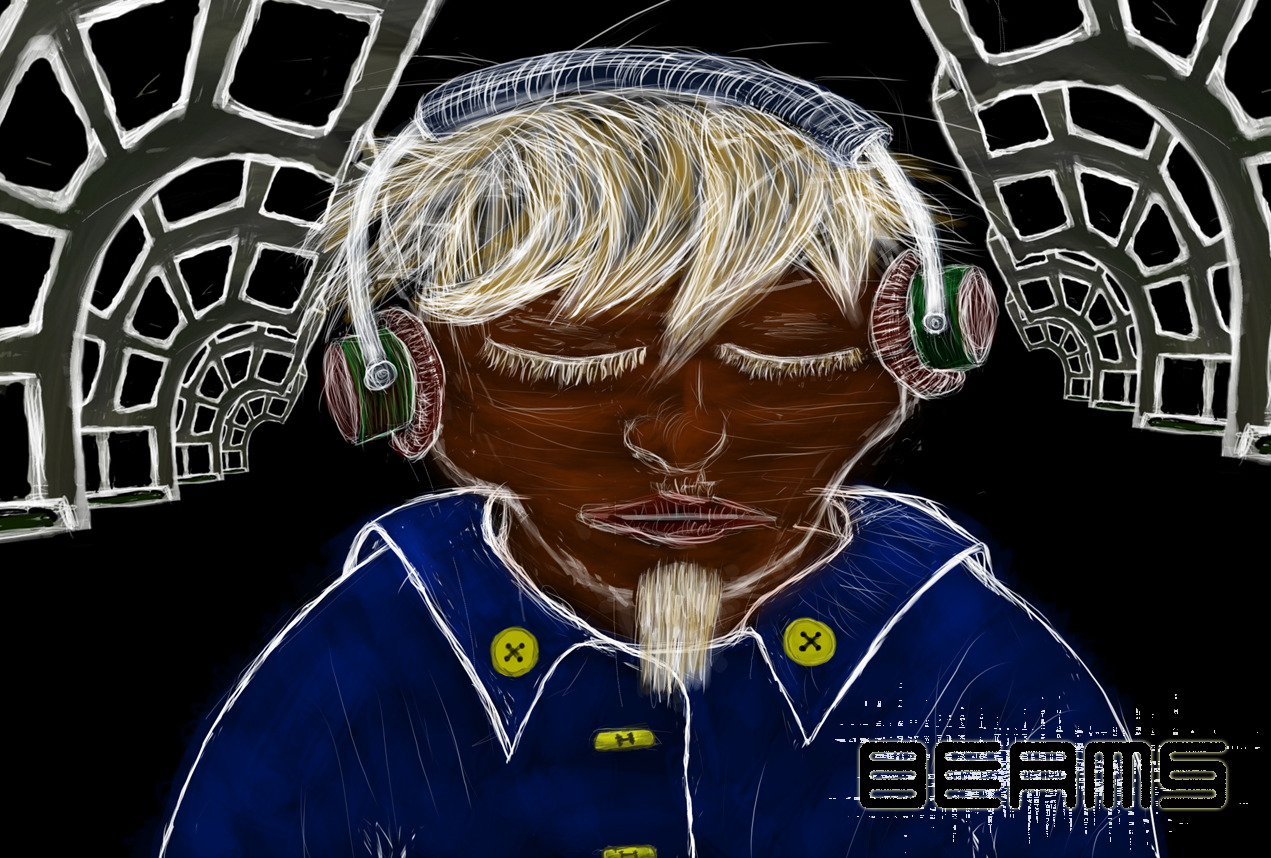 Last three days i am stuck at painting. Not really stuck, but trashed so many sketches, to complete the story in five scenes.
Here is 2/5.
Hardest part is to get a similar look.
think Howto paint something like a graveyard, without religous things, and gorestuff like bodybags, all so complicated…
No experience in painting, could sit paint for the rest of my life, fun too…
Second picture i make perhaps animated. Walking, rest turning/rota. Things change while walk…
For the animated 2D stuff i try Synfig first time, but before i will rig 2D in Blender, i bet it works too.
I have no clue, if these pictures are “talking” in the way i want… 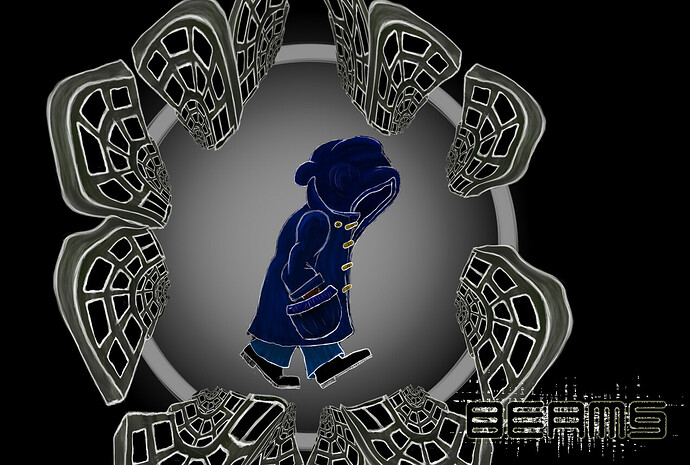 I don’t know why, but that talking head thing is hilarious and cute at the same time. Also loving the art style you choose to go for.