Beam with Actor Source Method, Following Actor in Editor, But Not Game

I’m new to Unreal 4 and need a bit of help. This is for an art test.

The company I am doing it for uses a proprietary engine. I could use any engine for the test and opted for Unreal. My last FX job was also using a proprietary engine, so it was a **** shoot on what to use. Hence my being a little clueless with Unreal 4. Still bloody love it though!

So I have made an electric arc using a beam emitter, as per the “Introduction to Particles in UE4 - 7 - Creating a Beam Emitter” video. I am using an Actor (Skeletal Mesh) as the Source and using another Skeletal Mesh Actor as the target.

My issue is that while the beam source (beginning of the electric arc) will follow my actor when it is moved around in the editor, when I hit play and the actor animates, the beam source doesn’t move.

What am I missing? 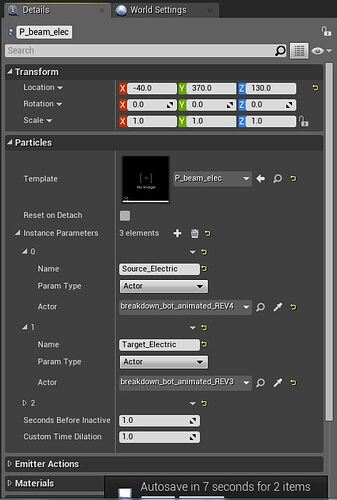