I’ve created a blank project with raytracing enabled. Added Beach Scene + Automotive Materials - everything default. Imported my mesh, assigned automotive material and the following problem appears: My mesh has these dark faces. Like some faces would have flipped normals. Checked - they are not flipped. And if you create a simple material with metallic shine for example - there are no such problems visible. This happens with Automotive material pack materials only. Have anyone found a solution? Thank you!

EDIT: if I rotate the object, sometimes these disappear. It has something to do with lighting? But why so big and rough shapes?

EDIT2: only if i start messing around within Automotive Material instance there’s a parameter Triplanar Rotation… only then i am able to make these black patches go away. But why is this happening and what’s the solution - would be great to hear your comments. Thanks. 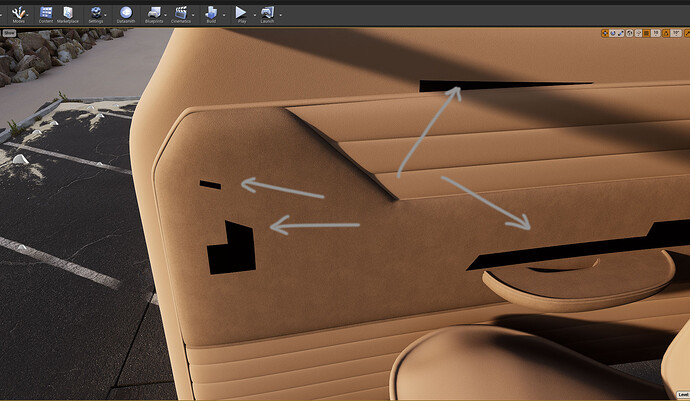 I had something similar in my landscape materials & it was due to some clamping issues. So, values got beyond 0 or whatever.
Maybe some other stuff used that material does not with the newer versions of they have changed a bit.

Maybe you can go into the material itself & find where this is coming from. You might need to disable some nodes & find the culprit manually.

I’m subscribing to this thread to see how you fixed this issue or get some tips from others.

Hmm, interesting. I definitely might go into this much deeper if adjusting Triplanar Rotation by a small amount will still not be enough. For now it seems to have solved the issue, though i havent checked whether rotating the object now will not have problems when rotated differently.

Thank you so much for your input!

Seems the issue goes away if I export my model from Blender to UE4 as glTF 2.0, not FBX and import in UE4 through Datasmith glTF plugin. Strange.

Seems the issue goes away if I export my model from Blender to UE4 as glTF 2.0, not FBX and import in UE4 through Datasmith glTF plugin. Strange.

Looks like a bad base model issue more than a material caused one.
Could be that the mesh has a double layer or issues of similar sorts.

No double faces for sure. Normals correct. I even simplified the model to a 40-50 triangles. It didnt even looked like a door of a car nowhere close but still those artifacts appeared. As I mentioned earlier - same mesh imported like gITF, no problem. Same mesh as FBX - problems only with automotive materials. So already was contacted by Epic and sent them a mesh for analysis.

This appears to be a bug that was introduced in 4.26. The same meshes in 4.25 do not produce any errors. I manually checked and there are no double faces, no inverted faces, all normals are correct and there are no other issues with the mesh. uvs don’t make a difference either. no matter if created within unreal or using imported ones. I do use blender (fbx export) but also get the issue with objects exported from 3dsmax previously. This is only affecting Automative Materials and it disappears when turning off flakes and orangepeel (in carpaint material). in the metal material on the other hand it looks correct if use object uvs is turned on.When the object in question is rotated the faces that turn black change (like flickering - definitely looking like a broken mesh but definitely isn’t the case). at some angles it even looks correct.

Yes, sounds to be the exactly the same symptoms!

So interesting (and important) issue.

Have you reported it as a bug? Unreal Engine Community

Yes very important. We had to revert back to 4.25 for client projects as we use automotive shaders extensively and no I haven’t had the time to setup a clean testcase required for submitting a bug report yet. will do that on the weekend

Yes very important. We had to revert back to 4.25 for client projects as we use automotive shaders extensively and no I haven’t had the time to setup a clean testcase required for submitting a bug report yet. will do that on the weekend

Another question; when you add the automotive pack to your project, and open the example map, is it totally white-overexposed?

PS: I have tested it a little and certainly it seems related to the triplanar normals.

Thank goodness for this thread. I’ve been trying to figure this out for hours. identical symptoms as the users earlier. clicked on the “use objects UVs” and it fixed it for me. 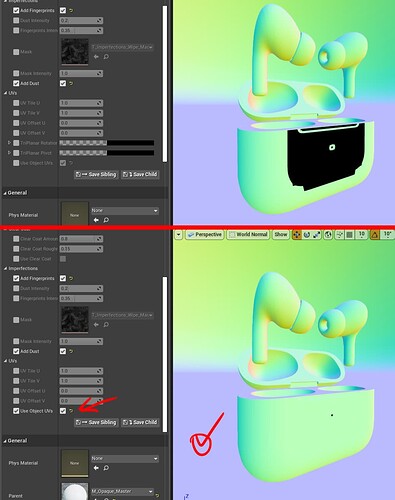 this is an interesting one for the Epic staff to take a look at actually- ive seen this rendering error show up in more than one place, and this scene in particular is bad for it. something about the way this scene is rendered just causes the black spots to appear.
afaik its also affected by the Bloom setting: i often get black spots that smear across the screen similarly to the lens flare effect.

Hi folks. I have the same issue in UE5 Beta - so I am assuming that it is also a problem still in 4.27. My problem was that some paint surfaces would flicker when the object was rotated. This is specifically for the Paint material - eg M_CarPaint_Master.

My solution was to modify the master material keeping the majority of the orange peel effect, but just simply skipping the tri-planar modifications that affect the orange peel. TBH I am not sure what tri-planar is doing in this case, but in my situation it is visually OK without tri-planar additions.

Images with and without the Orange Peel (as set in the material instance) - using the modified solution. Without the orange peel it just does’nt look right to me.