I know there are tutorials to do this, but they all require it to function at run-time. Is there a way to control objects on a spline, in the viewport, and in the sequencer? I need to manually control and animate a roller coaster.

I really appreciate your help with this! I’m still rather new to Blueprints, so apologies for the hand holding.

Create a blueprint with a spline component and a spline mesh, drag the blueprint in your viewport and change it in the detail dialog.

Is there a way to make it follow the path of the spline? It doesn’t appear to be doing that. Also, the mesh is squashed. I’ll try to look into it in the meantime. 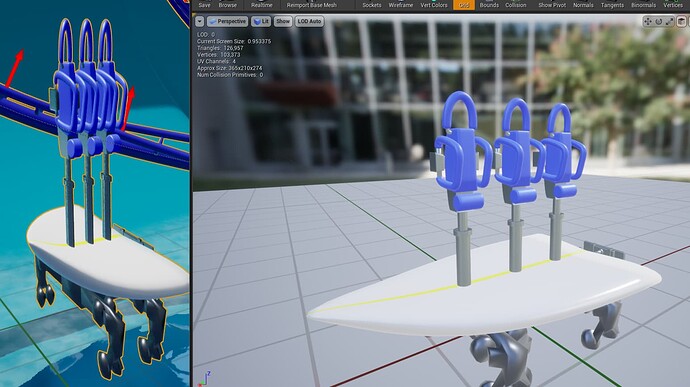 but they all require it to function at run-time.

Wrap the distribution script in a function and use it the Construction Script - it will run outside PIE, in the editor. You can use the same function run-time, too.

Here’s a bunch of examples:

Ah, I think I’m getting a better picture of this. I run this event in the Construction Script: [314125-cs.jpg] Do note how the components are now added to a Static Mesh Component array so we can keep track of them. This allows me to preview the result in the world and manipulate the spline any way I need: [Image from Gyazo] The arrows are not aware they’re attached to a spline, they will not follow it. The Construction Scripts actually executes every frame and recreates everything from scr…

Image links are currently broken. We may need to wait until the migration is complete and wrinkles are ironed out. But YT if full of hot spline action.

There’s a working project link in the abovementioned thread that demonstrates it.

You’d create a float offset variable, expose it. This variable controls position on the track. If you need to have more than 1 element, each element needs their own offset.

To be more specific, I run this in the Construction Script

May seem crude but that’s the gist.

Thank you for the help, it’s much appreciated. The “MyCars” and “Car Offsets”, are those arrays? I’m still extremely new to BP’s.

Actually, I think I’ve got it. However, what sort of array does this need to be in order to plug into the “ADD”?

Okay, I think I’ve got it actually…but it’s not quite there. Is this correct?

The construction script is my current spline that’s already set. I suppose the next step is just plugging in the “AddCars” function somewhere?

It’s here, a new graph will open after a double click. This part of the graph is executed when the editor creates the object. It will also run when you move or edit the actor in the viewport.

Also, any variables flagged as Instance Editable will be exposed for editing:

You get to control what values sliders permit and set their defaults, too.

[…]what sort of array does this need to be in order to plug into the “ADD”?

Instead of going through a long list and manually look up the pertinent type, you can promote pins to variables:

Handy and speeds things up!

I think I’m close. I just don’t know where to exactly plug things into. 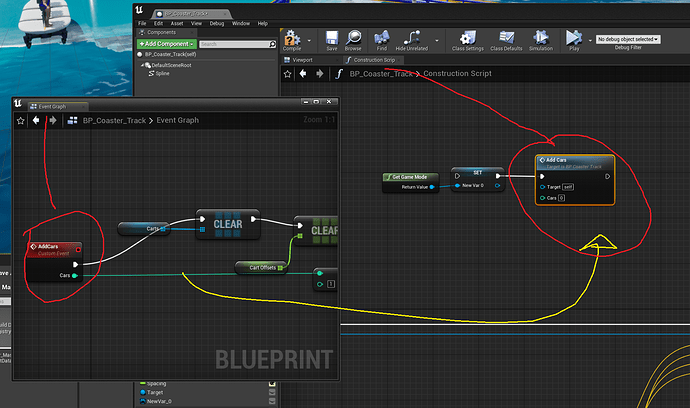 You do not need the Game Mode bit - this was just to demonstrate variable promotion to get the correct type. Find the Construction Script node in the graph:

Pan around, it’s there and cannot be deleted. You can also press Home on the keyboard and the editor will pan onto it.

Ahh okay! Sorry. Yeah, I got it to work now. Apologies for the million questions, but is there a way to clamp the location of each mesh? I’ve noticed when moving the carts along the spline they bunch up or spread apart. Seems as if they’re going based on the curve.

I’m going to look into it myself, but any assistance would be appreciated. 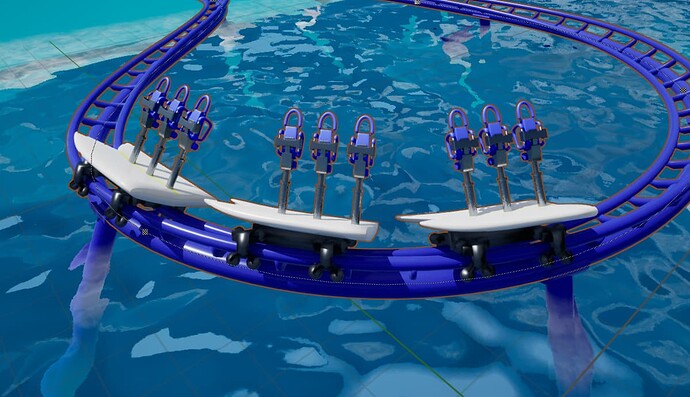 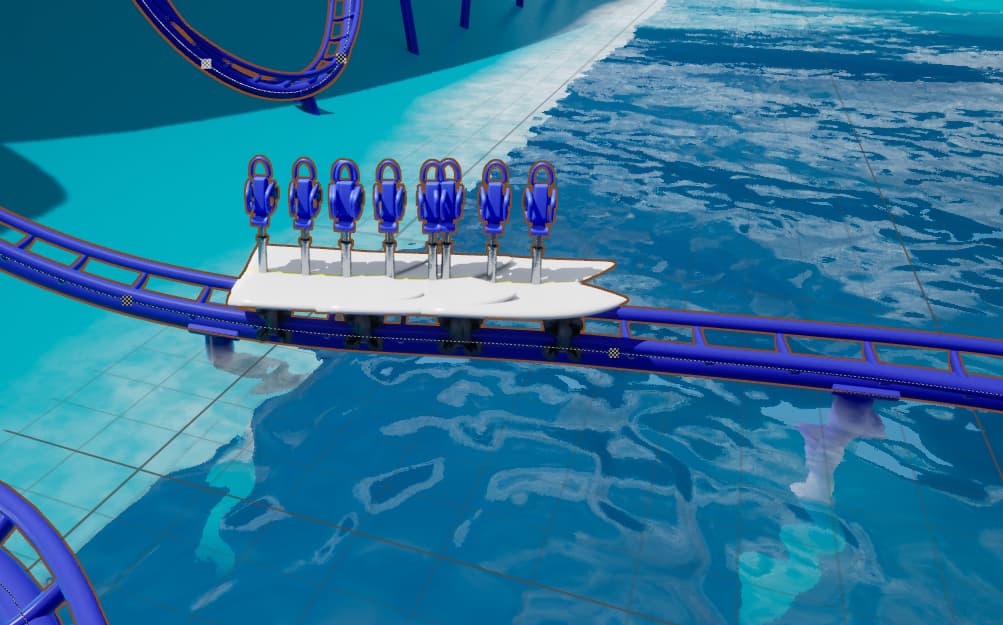 I also can’t seem to get the cars to animate in sequencer, even after exposing the parameter in the blueprint, even though it’s keyed. Is there something I’m missing?

I’ve noticed when moving the carts along the spline they bunch up or spread apart. Seems as if they’re going based on the curve.

Could you double check these: 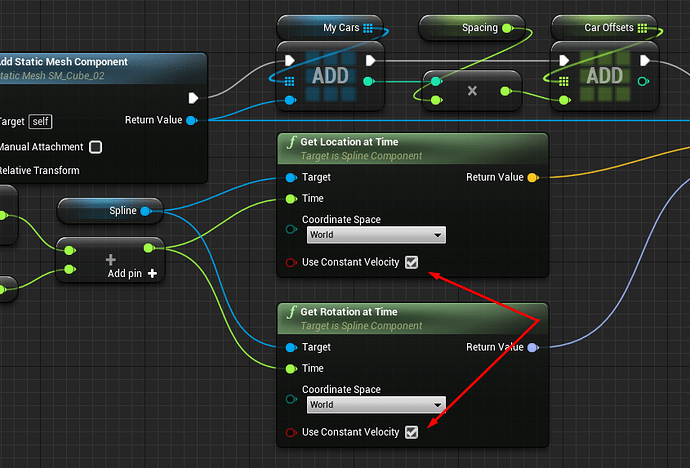 Constant Velocity should produce this behaviour:

edit: judging by the previous screenshot, this is probably it: 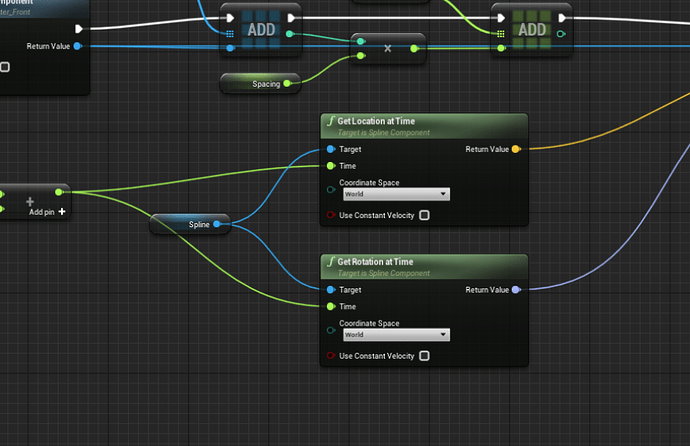 You’d need to Expose the Variable to Cinematic, and you then can: 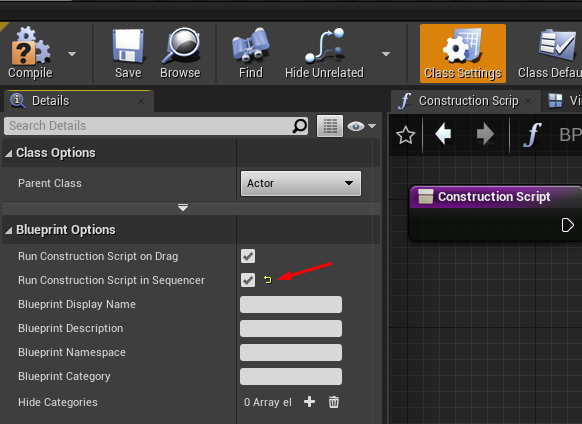 Admittedly, cinematography & sequencer are somewhat alien to me, not sure if I can be of any help. I’ll hang around to learn, though.

Ahhhh! of course. Thank you so much for your help. This whole project has been quite the learning curve, but I’ve learned a lot. I sincerely appreciate your help.

My last bit of annoying million questions would be, how do I use arrays to change the cars? I have 3 variations I need to use. 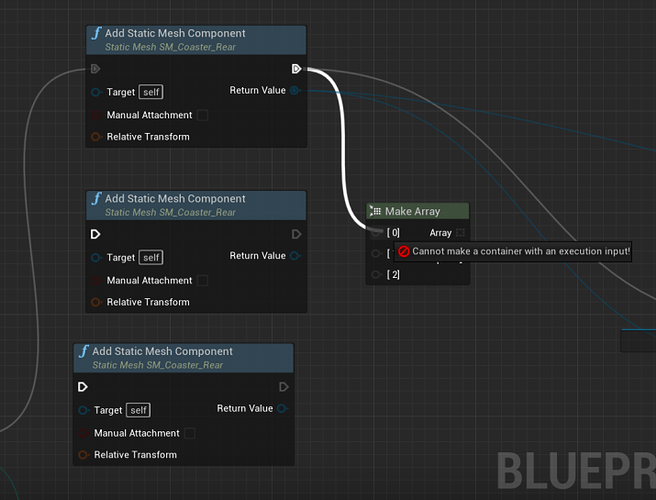 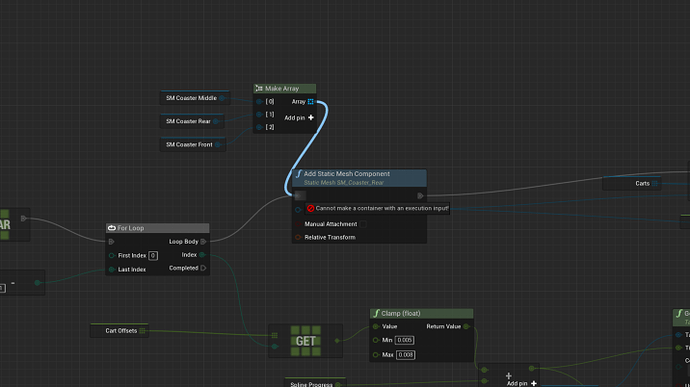 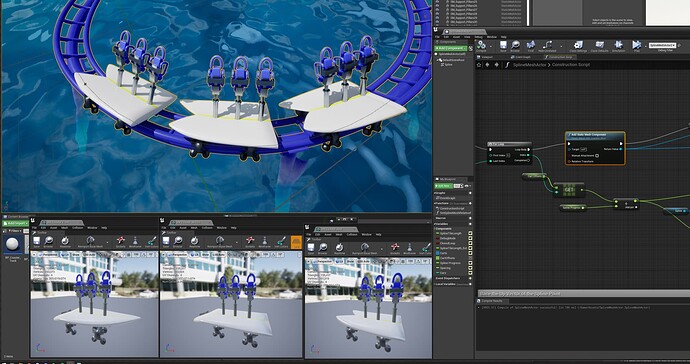 You’d think that. But answering builds up (brain) muscle memory. Things that work and things that don’t - both equally important.

how do I use arrays to change the cars? I have 3 variations I need to use.

What is the difference between the cars? The way they look? Or will they behave differently?