Asset not migrating with textures

I am a newbie, and I’m going though the MyFirstHour tutorial, which is taking longer than an hour but it’s okay. (I’m using unreal 4.25)

The tutorial mentions migrating (using asset actions) a piece of furniture from a project which no longer exists - ‘Realistic Rendering’, so I reached out to the forum and one response was recommended to use the ArchVizInterior project instead. Having done that, when I try and migrate a simple piece of furniture (DiningRoomTable) I can already see that the textures are not going to migrate with the asset, even though in the viewport I can clearly see the textures! What gives? I’d like to understand why so I can eventually migrate a piece of furniture just as the tutorial says. I mean, I can understand that a unreal tutorial is outdated, I get that. But this problem for me is difficult because I have no prior experience.

One clue that I have is the in the Content Folder of the ArchVizInterior project , none of the thumbnails display a texture on any of the Meshes, even though the myFirstHour tutorial shows textures in the thumbnails. 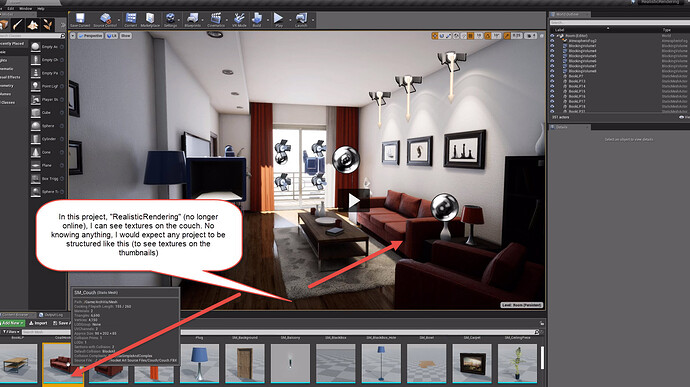 I’m certain there’s something that’s being done beyond my comprehension at this point, and no doubt the result of using the ArchVizInterior project, but how to remedy? Taking some guesses here that the answer is all in the setup, because there MUST be some reason as to why the assets textures are visible in the viewpoint, but do not export.

I’m fairly certain I could export the materials separately and reference (link) them eventually in my ‘tutorial project’, but I’d really like to be able to export the asset along with textures to avoid getting ahead of myself

Any help on this? Thanks