Hi, I’m trying to make an HDR skybox, so I made a sphere in Maya, inverted the normals, and imported it into UE4. In Photoshop, I took an HDR panorama (Latitude/Longitude type), and saved it as 32bit DDS. Once imported it in UE4, I’ve set the compression to HDR, created a material for my sphere, and plugged the HDR texture in the Emissive slot.
So far so good, I scaled up the sphere to 1000 units, and I put a SkyLight in my scene, set to SLS Captured Scene.

The problem is that I can see the reflections from my HDR image, but they look… LDR!
I have a lot of bright spot, as well as the sun, and they have very high values (I double checked in Photoshop) but the reflections of these bright spots are the same intensity as the rest of the image. it looks like my skybox is treated as LDR.
I can also tell, not just from the reflection, but simply looking at the sky sphere, the bright spots don’t look as bright as they should.

Am I doing something wrong? How do I “activate” the HDR in my scene? 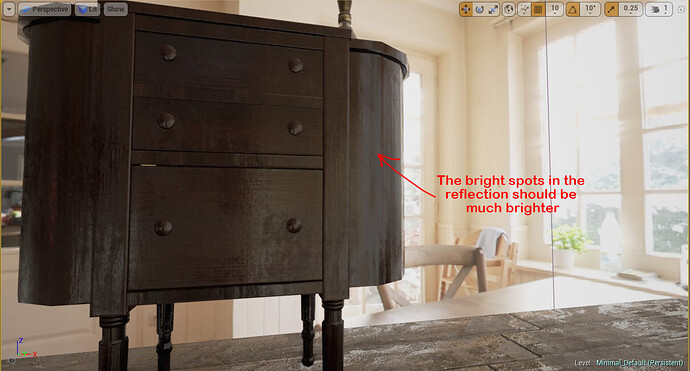 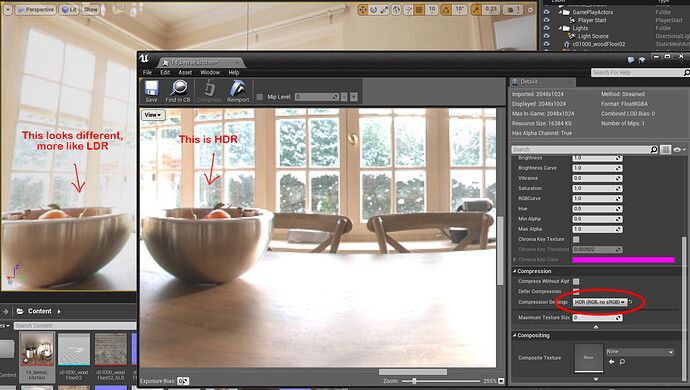 Also, in the SkiLight properties, I turned on “Cast Shadows” and set the Mobility to “Movable”, but the shadows are REALLY low res, and they also “move” in a wobbling way even if the camera is not moving. And the “Indirect Light Intensity” parameter doesn’t do anything… What’s going on?

Regarding the last pic, the wobbling effect is because of DFAO. The temporal stability of it isn’t the best at the moment.

jonimake, thank you for the reply. What about the HDR issue? Any words from the devs?

Since you can not change the intensity level then I’m assuming that the image you are using is not a true HDR.

How to Use HDR Mode When Taking Photos

HDR—or High Dynamic Range imaging—has been a common feature on both iPhone and Android for a while now, and it can definitely help you take better-looking photos. But is it always the best option?

http://i.imgur.com/z08R8CH.png Hey guys, here is the set-up that I use when I test my PBR materials in Unreal. I know the default ‘Starter Content’ includes something like this, but it can’t hurt to share this too! It works a little different; it...

Not to hard to figure out how to add more images.

Wounder why though you are using HDR? UD4 uses real world lighting models and PBR based materials so tech wise is a bit out dated.

FrankieV thanks for the reply.
Unfortunately I’m 100% sure the image I’m using is true HDR. I’ve been using it successfully in other rendering engines such as Octane and VRay, and also I double checked the values in Photoshop, and the bright spots goes well above 1.0

Can you tell us a bit more about the project? Is it just for the visual or a real time game environment? Is your HDR bound to a light source? Are you using PBR based materials or defused images?

Once again I would suggest that you check out the Showcase blueprint I posted but in general UE4 manages things like lighting, materials, and shadowing different than expected using common systems like VRay.

Proper HDR in UE4 though really needs to be a lighting source on to it’s self to work as expected which is what the Showcase blueprint does.

Bit of a cheat if you want to figure it out yourself but a good starting point as you can build your environment inside the showcase, add your own HDR , and over time you will land up with a single go to lighting solution.

Ramping up the skylight levels won’t do much as far as reflectivity goes. To get the effect that your are looking for you will need to play around with spec and roughness.

FrankieV thanks for the detailed reply. In the end I changed the lighting setup to a “fake GI” solution, with a mix of spot and point lights placed ad hoc to simulate light bouncing.
I had a bunch of renders made with Octane Render of an interior scene, and my goal was to try go get as close as possible to those render, but all the methods I tried failed, or they where not good enough. LPV works only with direct light, and the results are not that good for interior scenes. Lighmass gave me too many artifacts in the shadows and requires a lot of tweaking. HDR didn’t work as expected, so at the end I decided to go old school and put lights by hand. It’s inefficient, but so far I got the best results. I still have my LDR skybox and my SkyLight, but it’s very subtle, it’s there just to avoid to have pitch black shadows.

Thank you for you time. Any furthers suggestion will be appreciated!