I recently finished my graduation work for university here in germany, for which I relied heavily on UE4. For the creation of this application I had 3 months from start to finish. So from no idea, to an idea, concept, design, modeling, shading, lighting everything, doing blueprints, recording music, etc. Now I want to present it to you, the community, and hope for feedback and also criticism.

Idea
My initial thought when starting the concept phase of the project was “I need some other way to showcase my stuff.” Being interested in many different areas and having created various different kinds of work, I wanted something streamlined and adaptive that can encompass all of my web design, 3D stuff and music.
I already had a website where I also showcased a few of my projects, but I felt there was never a really good way to experience the “art” I’ve made. I thought about the factors that influence an experience and realized quickly, that the situation and location in which you experience an artwork has very much to do with HOW you experience it. So the art of presenting something appealing and adequately was kind of a guideline I tried to follow.
For the “classic art” (like paintings, sculptures, etc.), you often experience them in a museum or in an artist’s studio, where the room, the location itself is part of the experience. So I’ve built a virtual studio for my art and presented my work there interactively, so that everything in the virtual space had a purpose and I could utilize the full potential of this medium. 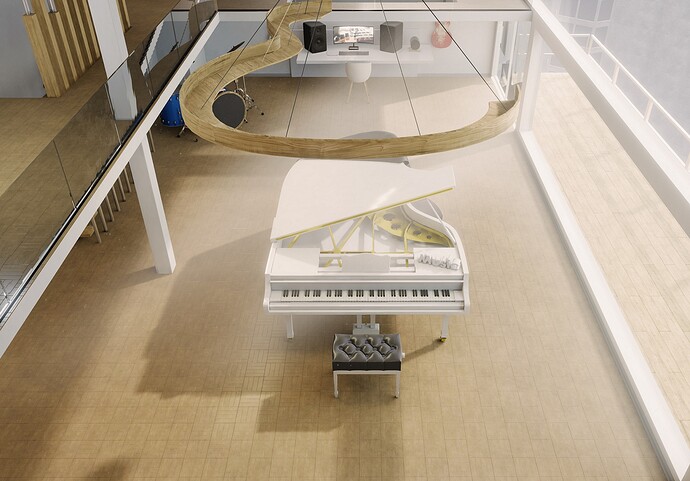 Concept
For the room I wanted something simple and modern. Something that suits my taste, because the room itself should also represent me to some extent. Being part of the experience, everything had to fit together and look and feel harmonic.
I have never done a project in this size by myself, nor have I ever engaged in interior design or visualization. I learned a lot in the UE4Arch-Forums (thanks to the guys there!) and jsut had to invest some time in researching and trying out different room layouts, until I’ve found something that worked.
The interaction should be specific to the types of work presented. So when looking at my web design projects, you could get some infos of the different projects and also take a look at the real website inside of the application. For the 3D models you get also some information and a 3D turntable right inside your info-widget.
The most important part to me was the showcasing of my music, since this is my favourite part of all of this. I got into film making, web design, 3D, vfx and so on through making music in a band and having to deal with designing a website for the band, shooting and editing some videos and stuff. Music was my entry into this whole crazy world of design, so I wanted to showcase it properly. I wanted to do something visually supporting the music in the world the viewer interacts with. So the exterior world (you can look at it through the big windows) changes accordingly to the song that is playing. Sometimes it is just a world I’ve created, which symbolizes the content of the song for me. Other times I used eXi’s Sound Visualization Plugin (props to this master for making this whole thing possible) and visualized the song according to it’s mood and atmosphere. 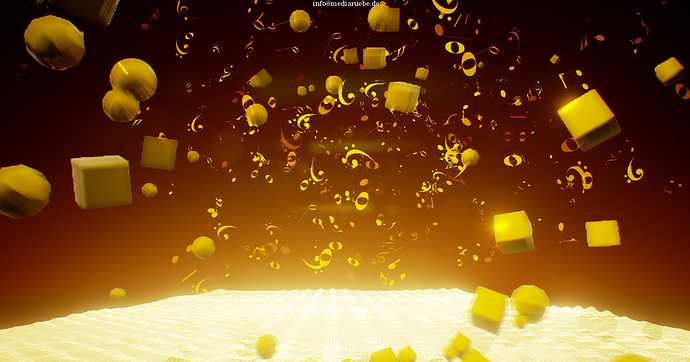 Production
I have used many different softwares while working on this project. I will just name the most important:
• Unreal Engine: Of course for all the heavy lifting. Doing scene assembly, lighting, game logic through blueprints, materials, etc.
• Blender: Blender is my 3D software of choice, since it is open source and has awesome features for my workflow. I used it to model everything you can see. I also sculpted the rocks, and fluid simulated the clouds you can see in one song world. UV-Unwrapping and so on was also done in Blender.
• Substance: Substance Designer and Painter were heavliy used for texture generation. I mean, it’s a no-brainer. These tools are awesome and stupid-simple.

Target-Hardware
I didn’t want to compromise on quality, so I narrowed the target hardware down to mid- to high-end PCs. Also I didn’t really have the time to optimize performance in any way in these 3 months I had to finish the whole thing. But in the end I am rather pleased with the outcome and the choices I’ve made.

Why no VR?
VR was unfortunately no option for me, since I didn’t have acces to a VR-Headset and didn’t want to spend the money on these prototypes that were out at the time of creating this. Also I would have narrowed the target audience even more, since everyone had to have a VR-Headset for experiencing it.

What now?
I hope some of you maybe like my approach of using the Unreal Engine for something different. Also the idea of the interactive portfolio is something that could be taken to various different awesome levels I imagine.
I’d also like for you to comment, give me feedback or critics on the project, since I feel constructive feedback and criticism is a way to get better. And that’s what we all want, don’t we?

Here is a short trailer I did for my website: Thanks in advance for taking a look at my stuff!

Just saw it on the Stream! This looks awesome (:

When I saw the Music Animation, I was like:“Waiiit, does this use my Plugin?” and YES, it is!

Really cool to see people use it. Awesomely used. I love this portfolio idea (:

Thanks so much for the nice comments. I didn’t realize I was featured until I opened the launcher today and saw my piano as a spotlight thumbnail. Really awesome!
Thanks @eXi for your awesome plugin and your help. Without you, the interactive portfolio would only be half as cool.

Awesome work!
Really nice approach to show something valuable.
I like people Who wants to find the way to choose the best…
Your work in 3 month was a huge job

I’m actual on 'rookie stage with UE.
I work on a similar project but it takes much more time because I learn currently the features of UE.
I began my project with full of ideas, full possibilities of being profitable but not enough time to learn every feature to make it myself…

Great piece of work mate! Have you managed to make a HTML5 build of this, would be a good 1 to put on the website as a folio.

@iammors: Thanks so much for the kind words. It was really a huge amount of work to make this happen.

@ZoltanJr: I did not try to make a HTML5 build because I would have had to make to many compromises on quality for the project to really work in a HTML5 environment. I specifically built it to run on high-end machines first so that I wouldn’t have to really think about performance problems. Also some stuff like the music visualizing plugin is meant for PC builds only I think.
I also intended it to be something for me to go to agencies and studios for application use, where I knew they had high-end PCs so they could run the application, or I could come there with my high-end laptop (with a GTX 970M inside).
But I agree with you, that ultimately web, mobile or even VR could be really interesting platforms to port this on.

For me the project isn’t really over. For now I am focusing on other stuff (like finding a job after my studies) but I am planning on developing this further, since I really think this could be the future of presenting your work. So I am grateful for any critics and suggestions to make this even better or add functionality.

Now you need a web version of it…

Thanks for the suggestions! The making of the video happened literally the day before I had to present my thesis, so I didn’t really finetune and clean it up.