So, I’ve spent the past few weeks learning about and working with Unrealscript and I’ve learned quite a lot about how UDK works under the hood. As far as I can tell, although now unsupported, it’s still a very versatile and practical game engine for indie devs. Especially comparing it to Unity 3D (Which I am not a fan of). So, I’m wondering, although UE4 is the main focus of almost the entire community now (and with good reason), does anyone still use it for development?

I ask because my website, is dedicated to releasing free content for games that vary from art to code, as well as spreading the word about indie teams and the games they work on. I was hoping that I may be able to enjoy myself in some legit programming, while making code packages that people might find useful.

My problem as far as UE4 goes is that UE4 will not run on my computer, at all. I would list the specs, but I don’t think I’ll need to. Just know that the graphics card is worse than my 50 $ phone off Ebay. It’s that bad. And although I do plan on upgrading, I’ve had some financial issues lately do to identity theft. :\ I do plan on rent-to-buying an Alienware, but before I make a move like this I wanted to make sure that it’d be 100% worth my time.

Oh, and I would like to note that I have quite a lot of UE4 experience as well from previously working with it. Why I can’t use it now is a long story for a different time.

there are still a few people working with udk.mainly 1 man teams on personal projects.there are 2 in the UDK projects so far(mine included)and I expect to see a few more move across to these forums very soon.

as you say,UDK is still a viable option for indie projects,and although you do need a beefy pc to run my game,its still a lot less than you would need for the equivalent ue4 project.

so hats off to you and hope to see you around this section often,i could do with some help in promoting my game.its an area I tend to lack in.

still using UDK. like gaz described, on a one man project that I’m really motivated to finish. after that I’ll move to UE4 (for a followup project)

if I may say, build your own PC instead of getting an alienware. it’ll be much more worth your money

Firstly, I would love to help in promotion of your game. I’m not that great in that area either, but my blog seems to be pretty good for promoting other’s games. I feel like my problem isn’t so much promotion, just creativity (which I have a SERIOUS lack of XP). I’m glad that people are using it though. I guess I would have probably noticed if I’d looked around a bit on the forums, but I hardly have time to do much outside of my day job, so I like to spend all my free time programming. If I didn’t, I’d go insane.

Yeah, I’m planning on it. I’ve actually got a list of all the pieces I’d need, it’s just that the payment method for Alienware (though ultimately more expensive) is only 20$ a month… I know, mathematically it’s not very sound to do this, because I’m getting a lot less out of my money, I’m just scared of spending anything more than 50$ at a time on anything I don’t need to. XP

Welp, I’m glad I might be able to help a bit of the community here. I’m currently making an open world/rogue-like with with a DOS-like render, mostly because I had to downgrade A LOT with the engine INI to make UDK run half-decently on my computer. You can’t really tell this way, and it still looks awesome. 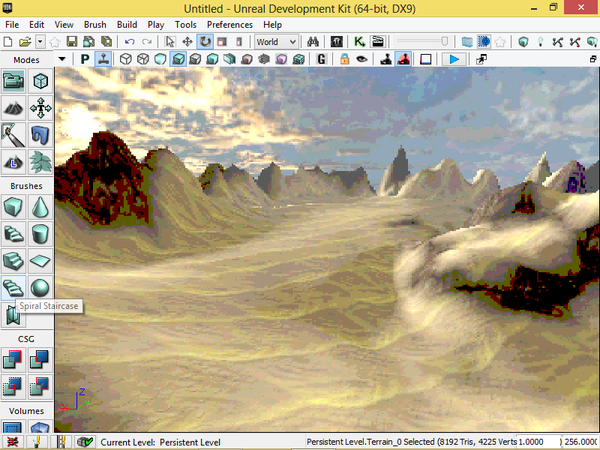 So, yeah, I’ll make a thread once my project is done with the link to it’s source code. Hopefully someone will find it useful.

good on ya for that.im a big believer in sharing.

That’s all I’m good at. I hate the marketing side of things, so I just cut that out and make everything free. Cause why the hell not?

Hopefully the existing UDK community can move over to these new forums.

I don’t get it, how such a good solid and reliable engine like UDK, exists and such small amoun of users sharing their progress in UDK ?

I’m also still using UDK, but I’m very slow at posting updates on my projects since I don’t think they’re quite ready to show yet. My Blender tools and modding are taking up a lot of my time at the moment, too.

good to see your still about Isathar.

I’m with Neongho, UDK works! The smaller community (which is actually huge, huger than UE4 but many ppl are too shy to participate :p) but the community reveals the truth about Indies/other devs, we’re sincerely focused on our goals. Changing to UE4 we’d never get anything finished and as Chosker inclines we’ll move later.

welcome to the forum to all the UDK devs:), it’s nice to see some names I recognize from the old forum.

The smaller community (which is actually huge, huger than UE4 but many ppl are too shy to participate :p)

I was going to agree with you but I think this one is now bigger, plus with you guys/gals its even bigger still;).

Thanks for the welcome smokey

I used to use UDK often but it was hard to find any projects or jobs. It almost felt like a ghost town in UDK compared to UE4.

At least according to the Epic Games Forums.

Another UDKer checking in. Also, regarding dev machines, I think I need to sing the praises of Amazon Web Services here. If your current dev machine isn’t fast enough to run UE4, then you should rent an AWS GPU instance. A spot instance will cost you about 13 cents/hour for 8 Xeon CPUs and a huge Nvidia GRID GPU. I use a much bigger machine to crank out my lighting builds, and what takes my home machine all night to finish, I can do in just a few minutes on AWS.

Edit: Oh, and I too am a dev team of one, doggedly trying to finish a project I started nearly two years ago.

Is it true that Udk is better for a solo dev???