Any idea on how to fix this render issue?

Hi all, I guess I’m not the first one who experiences this weird behaviour, but i couldn’t find a solution for it yet. I’m talking about the powder like white spots. Attached an image of a couch under a spotlight (2 spots on the wall lighting downwards).
What I’ve already tried:

Other areas of the level are completely fine, this is something area specific - must be

at this point I ran out of ideas, please help me 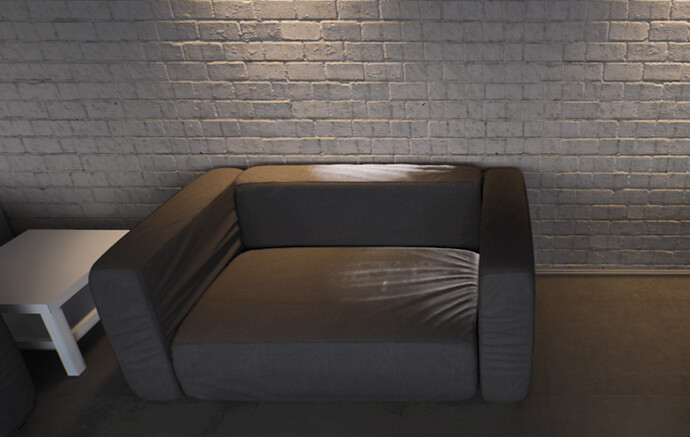 I am really shooting in the dark here but…

These are the most important parts I can think of.

I hope it helps.

One more thing:
Dynamic (moveable) Actors’ lighting is done in a very different way than static ones. If the couch is a dynamic - change it to a static one and see if the problem persists.

However, by moving the couch a bit away from the wall seems to lighten the white areas, but this is not really a problem solving as in this case its fine, i did it for demoing purposes, but if a client wants something by a wall, and this reappears as an issue, I dont know how to fix it for good.

also, everything in the scene is static

so, I have a few lightmass portals in the windows to channel the indirect light into the room.
Indirect light ray bounces are set to 100, indirect quality set to 10.
the exterior in this case doesnt matter too much as it is an interior demo, if I’d do exterior i would probably build it in another level so when you go in you have a different lighting setup for the room compared to the outside, so I dont have to sacrifice the look on either the outside or the inside - since its not an actual game, more of an archviz demo, it does not have to be that “seamless” regarding navigation in and out of a building. (so I think a loading screen is fine)

So as far as my knowledge goes about global illumination my bet would be that the rays are bouncing back and forth in that area, but i have no idea how to “kill them” after a few bounces as for the rest of the scene the 100 bounces look perfect

I am not that experienced in Unreal lighting as you probably are. I’ve worked however, with other rendering engines and I think I know what the solution might be.

Put an additional light (plane light preferably) right behind your window. It must be bluish, very week and as

Problem: There are very few rays from the sky dome coming in through the window. The sky dome has a set number of rays firing and if the opening is small enough you get very few of them actually in the room.

You might be able to increase the number of rays but this would be an “overkill” for your exterior. Also it will increase the baking time tremendously.

You might make the window big enough so enough rays enter the room but that is not always possible especially if you work with real building plans.

You’ve really gone over the top with 100 bounces. 10 bounces should be enough for most cases as depicted here: Sky Light | Unreal Engine Documentation

Try using more subtle values as the engine will not work that well with such extremes. Check this out (if you haven’t) CPU Lightmass Global Illumination | Unreal Engine Documentation This will give you some “rules of thumb” values for the settings.

I think it’s more texture problem rather than a lighting one, how are your textures made? are you using substance or anything similar? try multiplying your metallic/roughness or specular by half

Quite frankly the origin of visual artifacts are among the hardest things to pinpoint.