Anim Notify not firing, not sure why

so I have no idea why the string OFF isn’t printing, it makes no sense. and yes I checked the animation has it. ON fires though. any ideas? 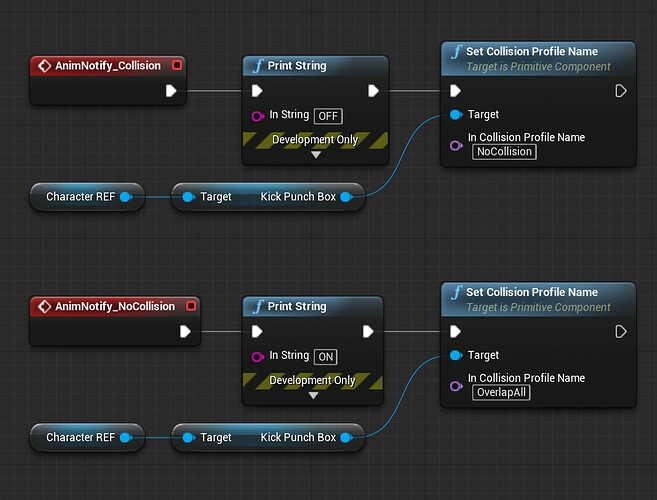 That’s how they work.
They fire IF they can. With no guarantees.

So why does it not fire, and how do I make it happen?

Is it too close to the end of the animation? That was once a problem I had with these notifications.

Notifies are a system for setting up and receiving events in Animation Sequences to perform external actions.

Midn you, they removed 99% of the explanation and just left you a warning

Basically look the docs over. Find where to change from que to branching point and you should be set.

Btw, from a design standpoint changing collision is a really bad idea.
You may want to rethink the way you work it.

Toggle a bool and prevent the event from firing is likely much faster/better/optimized/and reliable.

How do I make an event that when the Boolean changes though it performs an action? I know I can’t put it in the tick because performance but idk how else you’d be able to do it besides an anim notify

This is more of a BP ask rather than animation.

In terms of “making a boolean stop execution”
You literally just put a branch node and use only the relevant true/false execution pin
or you “return” whatever function if the boolean is true/false depending on what your needs are.

The function/event/whatever will still execute, but the code within will not - which is what you are after here.

For the rest, there’s many ways to skin a cat:
The most efficient one is to get the animation toggle a boolean when needed or to use a Notify State.
Notify State is a good solution because it includes a start, an end, and a tick.
You won’t necessarily need to use tick part, but the start and end can set the bool to true and false just fine.

Anim Notify States (Notify States) work much like the standard Notifies above. They have 3 distinct events: a begin, a tick, and an end. They start straightforward, firing at the moment the Notify begins and ends, and the Event Graphs in them fire off when their time comes up in the animation. The tick fires off every animation update until the end event is hit. The major difference between normal Notifies and Notify States is that Notify States are self-contained Blueprints.

The alternative to notifies is direct animation time.
You can “GetInstanceCurrentStateElapsedTime” in C++ for non montage things
and “Montage_GetPosition” for montage things.
This returns the float (time) the playback is at.
You can then, if > X / bool = true;
(obviously this would be done on tick, or “while” something).

Decide which way to go.
Knowing Regular notify won’t cut it if you need to actually toggle OFF within the same animation/montage.

There’s also the 3rd option.
React to user input, not animations. IF attack button was pressed, toggle to check sweep of collisions.
Having it NOT be related to a montage playing or animations CAN be beneficial. Just depends on what you are doing.