Alternate firemode on a gun in Robo Recall?

I wanted to set up a gun that has a switch on it, for switching between burst and single shot.

Following that awesome tutorial Zak Parish made I was able to get my own gun mesh in the game. It works almost perfect, but I want to modify it. So I was hoping I could get some help on implementing the Firemode switch, and the burst. 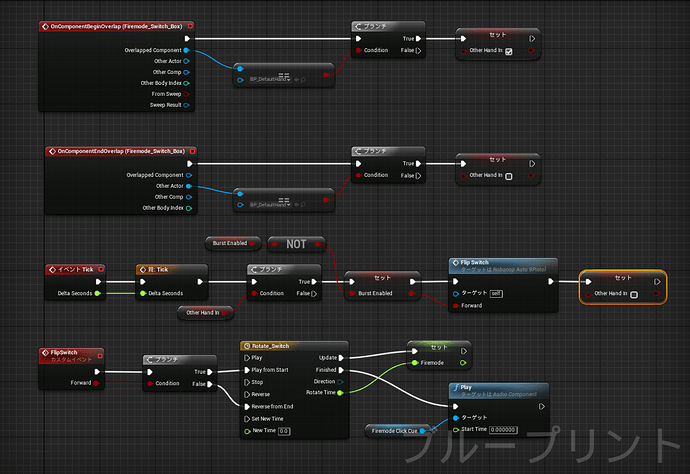 I added a trigger around the switch.

I don’t know how I should check for when the player’s other/empty hand enters the trigger, as default_Hand_BP isn’t recognized by the switch trigger.

Here’s another thing I tried but it didn’t work.

Verified the Left/RightHand skeletal mesh variables they were promoted to were valid (were still set to the Main Hand Mesh) after setting.

End overlap node has the “Left Hand ==” node plugged into “Other Actor” and not “Overlapped Component” like the “BeginOverlap” node. Should that be right, or?

Hey DavDan, thanks a lot for trying to help!

I made’em match, though, so that Begin and End were checking the same “Overlapper”; tried both (Begin and End) checking “Overlapped Component”, “Other Actor” and “Other Comp”, and none of them worked. It never hit that breakpoint on True.

I’m guessing I’m getting the wrong reference to the hands. Jsyk, this is the first time I’ve messed with a VR player character. I know nothing about how it may be different from a standard character.

I’m totally in the dark here, and can’t find any specific tutorials about getting VR hand references in robo recall. I guess I’ll look around for some tuts for leads in hopes that those setups are similar to RR’s.

I tried to detect the left motion controller on the VR_Pawn but it’s not registering on trigger enter either.

tmek, in the Robo Recall forum kindly hooked me up with a video on how to implement a switch, which can be toggled via controller buttons.

Now I’ve got to figure out how to do the burst shot. Seems only single and full Auto is supported by default.