In my Project i´m switching from my 3rd Person View into an RTS View.
For that I switch the Camera and Possess the other Pawn (RTSCam) to my PlayerControllerMain.
The ThirdPersonCharacter is Possessing to an Ai_Controller after he gets unpossessed from the PlayerController.
When I´m in RTS View i can rightclick anywhere on the map and the “owning” Character (whos Possessed by AI_Controller) is moving to that Location (thats fine), but only the second Client (third Player) and above cant see the walking animation of their Character but they can see the other ones walking around with animation. For the first client and the Server it all works fine.
In 3rd Person view animations are working completely fine for everyone. 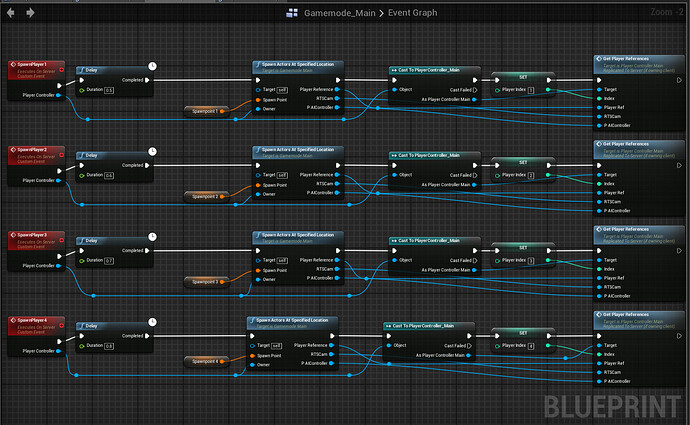 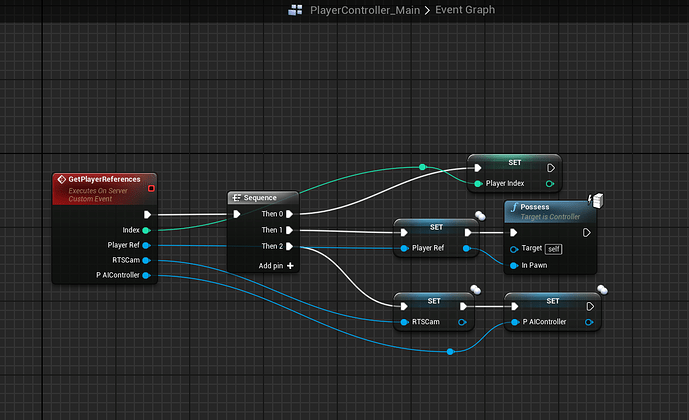 Setting the References and possessing the Character at LevelStart 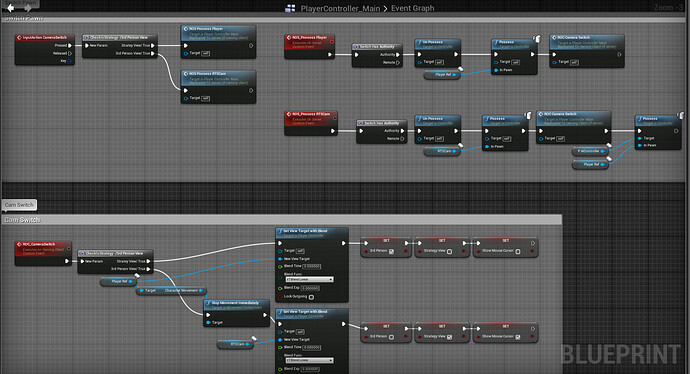 The Details of the ThirdPersonCharacter.
In the Details of its Capsule Component i´ve checked the Box with Components Replicates, before that the "Owning Client (second and above) even couldn´t see the his Character moving to the Location.

If you believe that there may be a bug here, I’ll need you to identify which part of the setup is causing the issue and isolate that so that we can reproduce this in a clean project. Please provide a detailed list of repro steps once you are able to narrow down the cause of the issue.

The reason I ask for this, just for clarification, is that in order to put in a ticket we need to identify the exact issue in the simplest way possible.

Sorry for the late reply.
I tested some things out and noticed that its not always the second and third client. Sometimes the first client is not working and the third(or second), but mostly 2 clients not working and one just did fine. The Server is always good.
But when switching the Camera a few times, the one whos not working before suddenly is completely working and the others are still doing like before until i switch again it´s not working.

When in the Character itself the the Components Replication of the Root is disabled, i noticed that the Client who can´t see himself moving is not getting any Location Update of his own character (i tested it with a simple tick and get actor loaction). Only switching the Camera updates the Location and “teleports” the character to the Location (Still happens only on the owning client screen, for all the others he was nicely moving to the Location with fully working animation.)

I’ve spent some time testing this, but I haven’t been able to reproduce the same behavior on my end. Could you attempt to reproduce this issue in a clean project and then provide me with a set of repro steps I can use to see the issue on my end?

I´m already testing this in a clean project to easier identify the Problem.
Can i just send you the Project in any Way?
It´s 47,6mb “big”.

Great, thanks for testing. Let me know what the results are.

You can send me the project, and I can try to take a look to see if there’s anything that stands out. You can zip it up, upload it to Dropbox, and provide me with a link through a private message on the forums:

Sorry for the delay on this one.

I’m unable to open the project due to the dependency on Advanced Sessions, and oddly enough I’m unable to disable the plugin either in the normal fashion.

However, what I’d recommend, since I’ve been able to reproduce the issue in vanilla Unreal, is to remove the plugin completely and test it to see if the same issue occurs. If it is determined that the plugin is the cause of the issue, you’ll need to get in touch with the plugin’s creator in order to get support.

I´ve deleted the plugin now but its still not working.
At Gamestart every Player is in RTSMode so they can send the Character from one point to another (thats working), but after possessing to the character and then possessing again back to RTSMode(camera) one or two clients again can´t see there own character moving.

Unfortunately, I’m unable to get the project working in its current state, as removing the plugin causes multiple errors in the project and prevents me from testing it.

I recommend reproducing the issue in a clean project without using any plugins, and then providing that project so I can take a closer look.

Unfortunately, without a solid repro case, we are unable to take any further action at this time. However, if you are able to reproduce the issue feel free to leave a comment to reopen this thread at any time.