So I’m trying to have an AI actor patrol two different target points, and chase me when I’m in its view. I have two target points set up on the map and programmed in my AI Blueprint. The chase works great when I enter its vision, but upon start, the actor moves to one of the target points, stops, and won’t move to the other one. I followed an online tutorial and my blueprints are the same as the ones in the the video, but for some reason I’m not sure of, the actor won’t do as programmed. I also have the target points references in the “default” section of the AI actor. Any suggestions? 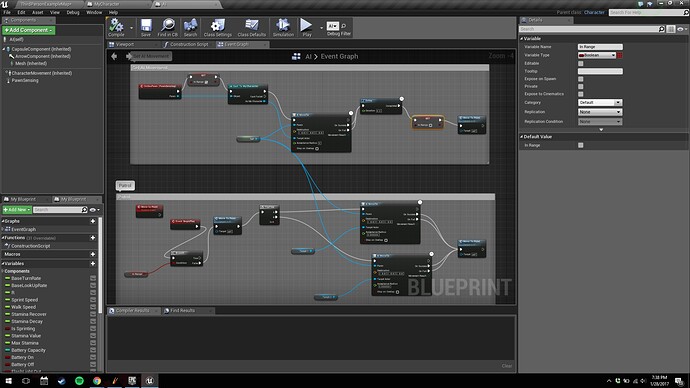 It doesn’t look like you’ve actually set your MoveToPoint custom event to have any logic, as it’s not connected to anything. This is why when after you run your initial AI Move To after OnSeePawn, you’re not getting movement to another point. You’ll need to actually hook up your MoveToPoint custom event to the logic that you want it to use so that when you call the event, it will perform the necessary actions. So basically in this case, I’d try hooking it up to the flip flop node and then testing it again. If you hook the custom event to that node, I’d imagine it would work like you expect.

Let me know if you have any further questions.