AI not moving outside its invoked NAV mesh radius

Hello am having some trouble with AI setup.
I have 1 Nav Mesh Bound Volume in my level.
The Nav Mesh is only being generated around my AI (Navigation Invokers) and updated runtime.

Everything works fine when the location it is supposed to move to is within the radius of its current generated Nav Mesh.
But if the location is outside the radius - (3000) the AI will not move and “AI Move To” returns “Aborted”.

How do I get the AI to move to a location that is outside the current radius of the generated Nav Mesh?
What I expect to happen is that it starts moving towards the location and “nav tiles” are generated until it reaches its destination.

Thank you for any help on the matter.

[Unsure of where to post this. Please Move if Apropriate.]

Have you tried using an Event Tick and having that execute the Register Navigation Invoker function?

No i only have it for Begin Play like this ( AICharacterClass:: ).

I can see the nav mesh beeing updated and removed, so I do not think the problem is the Registration.
I may be wrong ofc.

Hmm, I wonder if its because you’re asking for a point outside the current navmesh. i.e. you are literally unable to compute a path because its outside the mesh. Try doing a series of smaller moves (up to the extent of your navmesh invoker radius) and see if this works?

It would make sense if it couldn’t path outside the newly generated navmesh area, because there’s no navmesh to path on. So to go longer distances, you’d have to break up the move into a series of smaller steps? Of course that’s just me thinking aloud and I could be completely wrong.

I agree that was my thinking as well.
So I try to get the Path like this

.
But it is not returning a Partial path ether, do you know how to achieve this?

Hmm, is it even meant to return a partial path? What you might need to do, is get the nearest point towards your goal destination as a point on the current navmesh and path to that, then when you reach it, request the next path etc. Until the goal destination is the same as the path point on the navmesh, then you just do that path as per usual and you’re done.

Yes i was thinking the same thing.
But when going over the API and Nodes there are checks for Partial path.

It just seems to me that it should be able to handle this.
Do anyone know how you get a partial path for all my attempts return false for Partial Path?

So i did some more testing and I am at a loss.
When Finding the Path like this.

In all honesty i belive this is a bug, it should atleast return a partial path to the location that ends at the navigation radius and by then new tiles will have generated so it can walk futher.

But i get no data at all when the point is outside the Invoked Radius.
Here is a screenshot of my AI Character / Pawn BP and Controller.
Components in Character/Pawn Class/BP 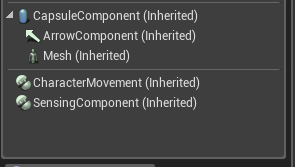 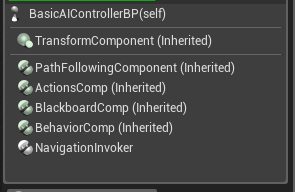 If anyone spots a mistake in my setup please let me know.
WCode

Going to bump this since I am stile stuck.

Any luck with this?