I’ve recently started looking into using streaming levels instead, and it seems that they mostly yield positive results. So far implementing it has been smooth, but I’ve run into an issues with the actor that generates the playable level.

Previously, I used the typical map system one map for every “menu” and while it has worked, it prevented me from doing simple stuff such as playing music as it would be interrupted upon loading a new level. Streaming levels fixed this very nicely and also helps me test stuff in an multiplayer environment with issues.

The issue is that when I start the game, the client will not have the same generated level as I*(the host)* does. This issue started occurring when I switched to using streaming levels instead of pre-made ones. And it’s really confusing me since the randomness of the levels depend on a random stream.

So given that all clients get the same seed, it should be identical across all clients…?

I was under the assumption, since the level generation is one actor - if I had it spawned via the server and set it to replicate - the clients wouldn’t need to generate their own one which seems to be what is going on here?

I’m still trying to get used to how replication works within UE4, so any suggestions as to what may be going on here would be greatly appreciated. I know it’s a rather vague description, but if you need more information let me know :rolleyes: 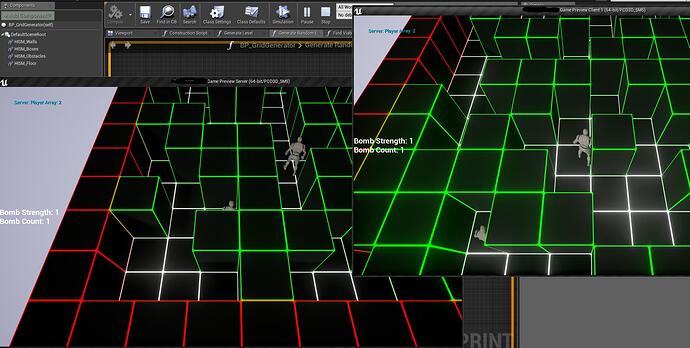