I am not sure if I am posting this question in the correct place or not, but as it appears there is little documentation anywhere on how to work with this plugin anywhere.

I have followed all instructions here: Quickstart for Google VR SDK for Unreal with Android for getting set up in unreal, and am successfully running on the device with the visualisation supported, and successfully executing functions with the OnActorSelectedEvent node. This is currently using the GoogleVR dev branch of Unreal 4.13

I am however at a loss as to how to gain access to any of the input buttons or touchpad. I have even tried with a standard MotionController component to no avail - is there any setup steps missing from either the Unreal Documentation or the GoogleVR setup documentation. Is anybody else experiencing the same issue?

On a side note - I followed the Unreal setup documentation for 4.14 using the standard motion controller input system - and it seems to work out of the box with the VRTemplate MotionControllerTemplate.umap

I took their GoogleVR branch and merged it with the new 4.14.1 branch from epic, and I’ve been able to set everything up by adding their specific motion controller component to my pawn. After that, you should be able to access the buttons using the buttons shown in their post. I’ve only tried using the app button (shoulder) but it seems to work fine. I’m also using it to switch between MSAA on and off for development. 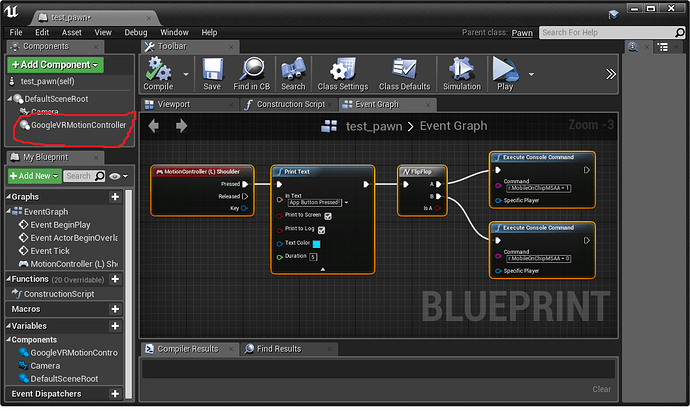 Great thanks Cameron Ill look into doing this myself.

Okay so really stupid mistake on my behalf, In the Pawn, set the Auto Possess Player to Player 0 to receive Motion Controller input.

Can be marked as solved.

Does anyone mind sharing their 4.14.1 version of the engine with the latest SDK from the 4.13 googlevr branch? (or post detailed instructions how to do it ourselves). Also requested here: https://answers.unrealengine.com/questions/543027/compile-414-google-vr-with-daydream-controller.html