Do any one knows how to get it in githubs? 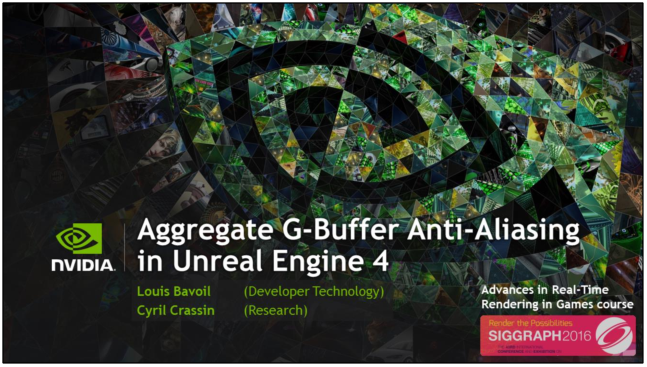 We think that MSAA could still be used if artists were made aware that using masked
materials and/or non-linear material nodes can slow down performance due to the incurred super-sampling at runtime.

In any case, look at what they’re comparing AGAA to. SSAA. Bear in mind, 4x SSAA is running a 1080p game at 4k and downscaling, while running it at 8x SSAA is comperable to running it in 8k.

This isn’t anywhere near production ready, it looks like a research topic at the very most. I wouldn’t expect to see this even considered for another year or two, if it’s not dropped entirely. 5ms for antialiasing is way too expensive, nobody would use it.

Quantum Break use similar system where they shade in lower resolution than they actually draw geometry. https://youtu.be/vH1gbKAv-yc?t=12m58s

Maybe useless in game with current hardware.
But It’s useful to using UE to make animation films.
Improve lots quality, Unless we can say good bye to TAA’s ghosting issue.