I was just checking this link,

One of the new features of UE4 (in comparison to UE3) is that you can access the world position of a pixel via post processing. I just reali...

It seems you can make post process effects localized. I was wondering, can you make such a thing for Motion Blur aswell? For example, a zone that increases the Motion Blur amount on the passing actors heavily, then returning to 0 when they go out.

Here is my plan;

I am making a Fighting Game. so Camera is mostly static. I do not want any Motion Blur going on for characters normally. Though with a special move, if one goes -very- fast, I would like it to have motion blur for “realism”. So I was thinking, maybe I could use a localized post process effect following the characters and increasing motion blur when needed.

Second Question: I was wondering, is there any way to prevent an actor from getting affected by a post process? The same question above comes to mind that, If I have a global post process in the map, is there any way that I can chose one of them having a large amount of motion blur while other not having it?

Another example would be having a Color Gradient not effecting characters but only the landscape. For example in Street Fighter the area becomes darker and everything stops moving when you use your Super bar to make a Super move. When the animation of starting the move ends, everything becomes normal. =)

A simple No would be enough aswell even if it would break my heart!

Thanks for your time and reading!

You have the ability to create multiple Post Processing Volume in scene with different effects. If you are not familiar with this topic, look these lessons.

First of all thank you for your reply and the link, it was helpful. Though what I want to do is something abit more complicated and I don’t know if I can do it with Unreal 4. So let me show you with pictures to be more clear. 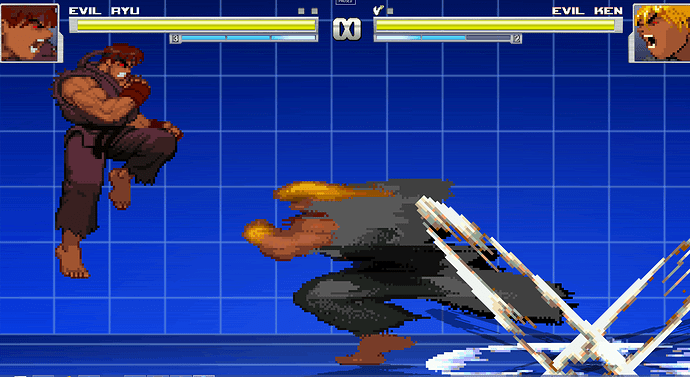 At this image, you see Evil Ryu jumping upwards in normal speed so he got no blur. That’s fine.

Meanwhile, Evil Ken is going from right to left and his speed so fast that gets blurred-ish as much as a sprite can simulate. -That- is what I need. I need a way to either have localized motion blur zone that follows players so I can increase the amount, OR I need a way to tell Motion Blur become appearent in high speeds.

As I have checked, Motion Blur Post Process got so little way to edit. I can’t seem to define a range of speed for actors to get blurred or not.

Another example I am trying to do is this: Image you are beside a road and you are looking at a bird flying slightly upwards. You wouldn’t see it blurred as it passes by, but if a car passes you with very fast speed, it would get blurred as long as you don’t focus on it directly.

If I put a post process that have the camera inside and increase the blur, even small movement becomes blurred.

My second question was this; 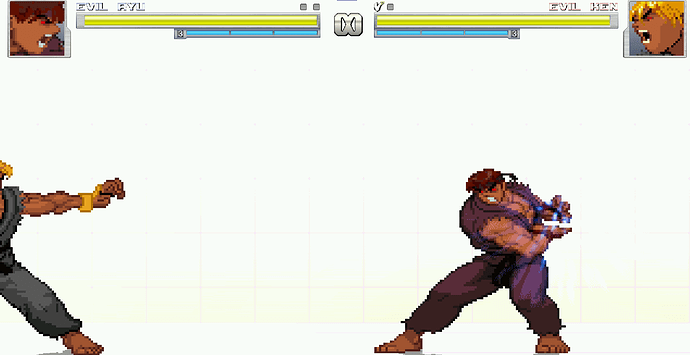 As Evil Ryu makes a Super Move, Whole zone becomes slowly white while characters are not affected by this. I am not literally concerned for this as I can fake it by material parameters aswell, but if there any way to prevent from actors getting affected by Post Process Effects, it would be nice!

Thank you one again