[4.7.1] Player yaw rotation is not reset on load level in VR

In non-VR mode the expected behaviour is seen.

In VR mode the player yaw rotation is transferred from the previous level to the new, making the player face an unpredictable direction.

I was able to reproduce this issue on our end. I have written up a report (UE-11247) and I have submitted it to the developers for further consideration. I will provide updates with any pertinent information as it becomes available. Thank you for your time and information.

Is this bug still being investigated?
Are there any workarounds that I can use until a solution has been found?

I went ahead and double checked on this issue for you. It appears that this issue is still under investigation. The status has not been changed to resolved as of yet. However, you can achieve the same result by using the “Reset Orientation and Position” node. You can select to only reset the orientation. You could call this node on begin play. This may be a viable workaround. I hope that this helps.

Thanks for your fast reply!
Unfortunately that does not work. The “Reset Orientation and Position” is just resetting camera rotation and not the player rotation.
The problem is that the player rotation is not being reset on level load in VR mode. This makes it completely unpredictable to know what direction the player is facing when he enters a new level.
When playing in normal non-vr mode it resets as it should

I’m able to use the “add yaw input” node on “player controller” to alter the rotation after loading the level, but I can’t just set the yaw to 0.

Edit: The following blueprint will reset the player rotation in non-vr mode, but has no effect in VR mode. 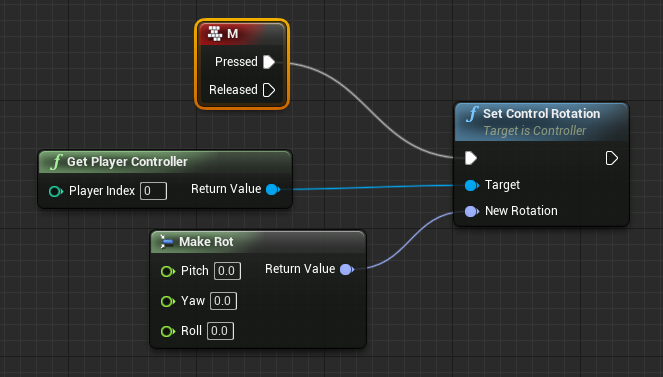 I took another look at the issue. After trying the original solution on a third person project I found that you are correct and that the character does not reorient itself. However, I have found that the following set up will work for me. I had to add a delay to insure the player grabs the correct value. With out the delay the character take the position of the camera before it has a chance to change. I hope that this helps.

I am currently having issue with this bug. Seems any amount of Yaw is preserved no matter what.