I have UMG Widget, that has another widgets inside it, but after i updated my UE, this error began to appear at start.

There is Int_Details inside Int_Inventory and now it doesn’t work whenever I load the project. To fix it, i have to delete Details panel from my widget and setup it again. But after another project load i get the same thing and has to setup it again

In gameplay it works fine. Oh… And when I select this widget, i get weird name on Details panel: 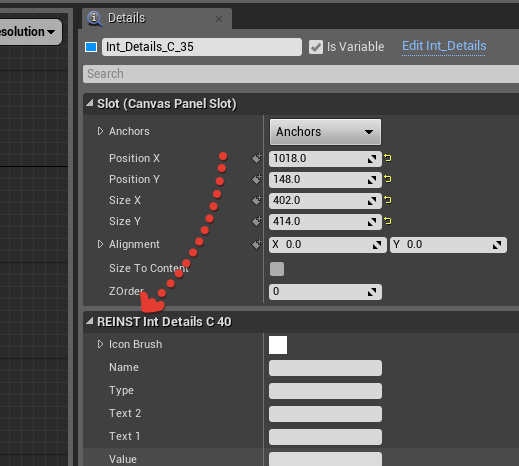 It happens with some widgets, other do works fine… I will try to make Details widget from scratch and see if it helps.

Oh… Look like I found the reason of this problem.

I see that you seemed to have found an answer to your issue. Do you still require any assistance with this problem?

Well, I do… I need to get a variable from Int_InventoryWidget to Int_Details. But as I mentioned earlier, engine starts doing weird stuff(Check the video)… Im not sure, if this is a bug, but that’s not ok. Sometimes it even crashes, when i try to select this widget(Int_Details).

After watching the video, I see that you get some compile errors. Can you provide those so that I may have a look at them?

A widget added inside a widget works fine until you close and reopen the editor, then the widget is corrupted as described above.

In my case, following the Twitch Training stream on UMG drag and drop, part 1, the ActionBar widget placed in the HUD widget gets corrupted on reopen of the editor.

Hmm, that is very weird. I do not have anything like that now. Does your widget have reference to its parent (main widget, where it is located)?

My widget is a direct copy of the widget created in the UE Twitch training stream, so my assumption is that it all the blueprint nodes and settings are correct.

I will work on this this evening and report back.

I am also downloading 4.9 and will try my project in the new version to see if the problem persists.

One fact I forgot to add was that my project was created originally with 4.7.6 and upgraded to 4.8

Thanks for the additional information. I will take that into account when looking over the reproduction steps.

Would it be possible to get a zipped down simplified version of the project that you are having issues with?

Sure, as long as you promise not to laugh.

By simplified, I presume that you mean stripped of art assets?

I will do my best to contain my mirth. As for what I meant about simplified, I simply meant that if you could remove parts of your project that do not deal with the issue it would make it easier to track down the cause.

I started paring it down this morning and had almost finished when the “Rebuilding class hierarchy” bug on the Player Controller occurred. I did not delete the controller, the editor just lost track of it somehow (Shows “None”) and now I cannot set it in Maps and Modes without crashing the editor.

I am convinced at this stage that the project does not save assets properly. Deleting in the editor does not always work and sometimes it only appears to work while leaving the folders in place. This would explain why the widget w/in a widget stops working after reload. Apparently some parameters are not being saved.

If I get it to work, I’ll upload a copy. If not, I’ll try again at some point during the weekend.

My current plan is to simply migrate the necessary assets to a new project in 4.9. and start over from scratch.