4.14 changed the look of some surfaces

Hello, when I upgraded my project to 4.14 my game changed its look a bit. reflections became darker overall for many material surfaces. the soft look I had in ss-profile materials is now sharp instead, see the image below.

Any tips? I have the same scalability settings, tried to rebuild, change reflector probes, got the same post-process as previously. Still stuck with the new look.

When you use Reflection Captures, the engine mixes the indirect specular from the Reflection Capture with indirect diffuse from lightmaps. This helps to reduce leaking, since the reflection cubemap was only captured at one point in space, but the lightmaps were computed on all the receiver surfaces and contain local shadowing. 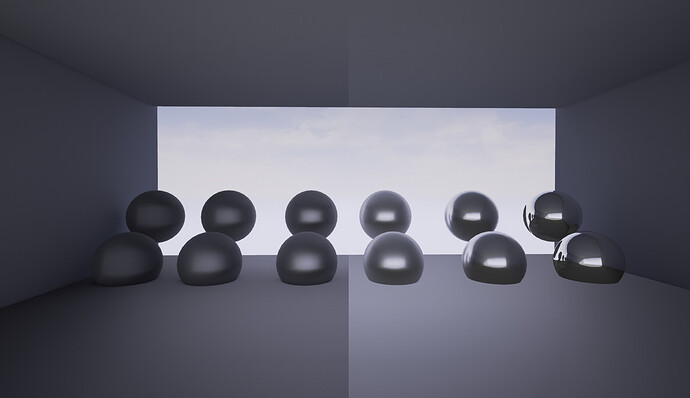 (With lightmap mixing on the left, without on the right)

Lightmap mixing is no longer done on very smooth surfaces. A surface with roughness .3 will get full lightmap mixing, fading out to no lightmap mixing by Roughness .1 and below. This allows Reflection Captures and SSR to match much better and it’s harder to spot transitions.

The below shot shows mirror surface reflections before and after. Note the difference in the reflection of the wall between SSR and reflection captures. The artifact is especially noticeable in motion, because it will move with your camera due to SSR limitations.

This affects existing content - in cases where you had reflection leaking on smooth surfaces, that leaking will be much more apparent. To solve this, place additional reflection probes to reduce the leaking. Levels should have one large spherical capture at a minimum. You can also revert to the old lightmap mixing behavior with a rendering project setting:

This was taken directly from our 4.14 release notes page found on our Documentation pages.

Thanks for the answer Andrew, this you mentioned was part of my problem. Along with the fixes and changes to subsurface profile materials, I just read the whole patchnotes.