I’m having trouble getting unreal engine 4.13 to host a session. The project was previously working fine in 4.12.5.

As a test I started a new blank template from 4.12.5, Adding just the steam config in the engine file and played in Standalone. The steam overlay was visible on shift+tab. However on 4.13 doing the same processes it is not, am I missing a setting or something? Or is this just a bug?

First, add this to your defaultengine.ini file:

Why are these changes needed? and where would we find the info if not here?

You can see the patch notes here:

Mac has a known issue where Steam itself has a bug that prevents the overlay from showing.

If you are on a PC, there is a setting you may have turned off.

Make sure that is checked.

Any ideas what to do if the steps above does not work? It gives no errors but Steam overlay just won’t show up when launching the game in standalone mode. Steam was running the whole time (and I was logged in).

I’m using Basic Code project as base for the project and this is the first thing I’m trying to configure to work.

I’m on PC and that sure is checked. Overlay is working on games I got on library and I can chat with friends while playing.

Is the steps mentioned above everything that is required or am I missing some pre-step that is necessary before I add the DefaultEngine and plugin enable? There should be the “Press Shift+Tab…” (or something along those lines) popup when I launch the standalone right?

After good night sleep I tried this again and now it works. I really don’t know what changed but maybe there was something that required computer restart for this to work.

Thank you for your patience Kyle.

I made the changes suggested, but I am still having problems.

I can’t find sessions, neither LAN nor Steam. “Sometimes” Find Sessions via Blueprint even just flat out fails. Haven’t nailed down why it goes from 0 results to fail sometimes

Can you do me a favor and check in your DefaultEngine.ini file and see if there is any spaces before or in:

As a visual reference: 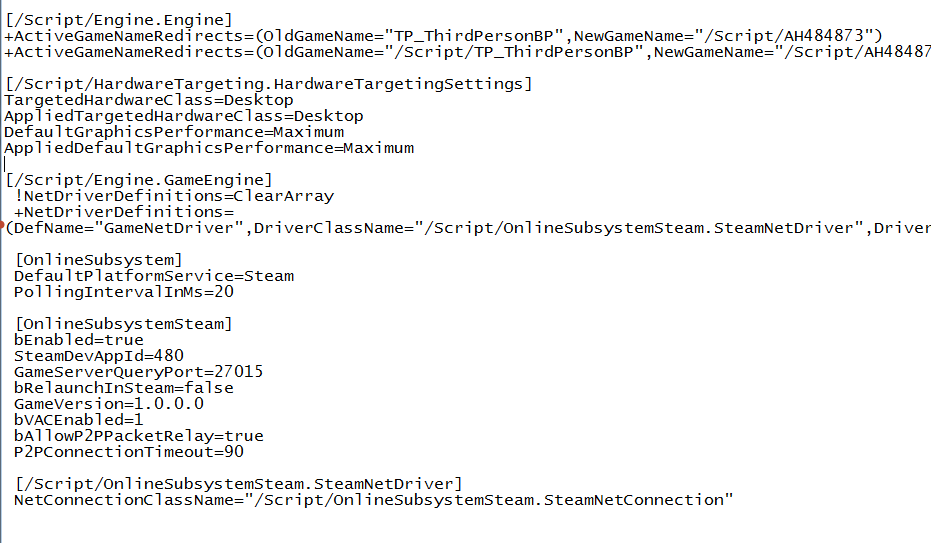 So with 4.13 introducing the plugin, does that mean that technically the build.cs changes for the OnlineSubsytem dependencies aren’t needed any more? (just going by the release note you pasted above). I’m also struggling to get a multiplayer connection working over Steam in 4.13 but I think it’s a different issue (Unable to connect to LAN match over steam after successful session join).

I can’t test right now if it works without spaces, I will do so as soon as I get a chance.

Are you testing on two different computers with two different Steam accounts? Steam doesn’t like hosting a game and joining the game with two clients, on one desktop, and will outright fail at doing so.

Thanks for the reply - yes two different accounts / separate machines - I’ve also discovered now that it works fine over Internet so it’s just LAN that’s the problem (even via direct IP) - full details there (any help appreciated, very close to Steam release, trying not to hijack this thread

Thank you for this, Was just about to start crying lol

We are not seeing this issue on our end.

Sorry for delay, I don’t think I got a notification that you had replied. I wrote you on the forums with a download link.
Problem is still there in 4.13.1, not there in 4.12.5

Here is an example project in 4.13.1 that works with Steam. I have tested internally and we are able to join and run around together while Steam is active in the game, under “Space Wars” because the default AppId.

A few notes about things I have noticed regarding other users issues:

Don’t assume that deleting or only using portions of tutorials will work. If its included in an example or tutorial, follow the instruction completely.

If you are having an issue, expeirment with why it’s happening before assuming the engine is broken. Something like Steam has been integrated for a long time and the chances of something core in that subsystem breaking are pretty slim. Here are the major Steam issues at the moment, none of which would block creating a game:

There is also a community update to the Steam Authority Ticket response, which is currently not working. The pull request is here: (You must be signed up for GitHub with UnrealEngine as one of your organizations.HERE is how to do that.)

Hey Kyle Langley, so I downloaded your version and copied it over to my project. I get the steam overlay and everything. But every time I create a session, it loads the new level for a second and then kicks me back to the menu level. After that it tell’s me that it fail’s to create a game and i can’t join a game either =/
Any idea would could cause that?