Hello all! Inspired by the Deadcells workflow I just finished my Editor Widget Utility in Ue4! You can make perfect PixelArt textures out of all your 3D meshs. Support animation, normal maps, stylized and more! 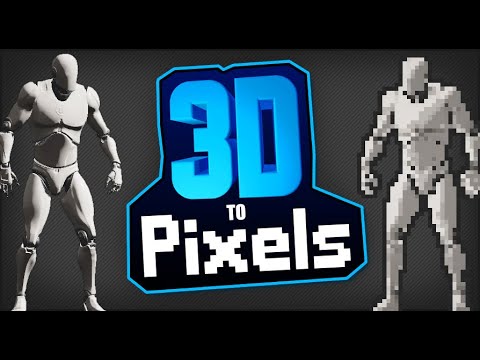 Now on the MarketPlace! https://www.unrealengine.com/marketp…t/3d-to-pixels

This is very awesome, and Im using it daily at the moment as it took my 2D project off the shelf. This is a must toolkit for any dev Indie or AAA. Awesome.

I will test the fix you suggested re folder location and feedback to you. There are NO showstoppers on this wonderful tool, and its a pleasure working with you ironing out the creases.

If your reading this as part of the thought process on weather to by or not. STOP THINKING, buy, then have some serious fun

All the best and you all be safe

Randomly, whilst generating an animation from skl mesh, images can come out with the mesh blacked out(image attached).

This is just a heads up, as more often than not, a second or third attempt they all come out successfully, with same settings, mesh and anim. So its a glitch that appears to resolve itself each time. Not happening at all with static mesh, so something to do with convert to 2D anim can create blackout of what it is trying to convert wiht a anim.

Cheers and still having lots of fun

Hey,
Thanks a lot for your feedbacks! Did you Alt-tab or change software (like chrome of something) when the render was running? When you don’t have Unreal Engine focused on the bake time the capture camera can’t keep up.

Hey,
Thanks a lot for your feedbacks! Did you Alt-tab or change software (like chrome of something) when the render was running? When you don’t have Unreal Engine focused on the bake time the capture camera can’t keep up.

Hi
Did some more testing based on your feedback, and though it wasn’t chrome :), I was looking at the dump folder c: emp\exports to check on external export status. I replicated this, also took a large bake anim with over 200 shots and that was 100% fine. When I did same test but looking at explorer randomly, thats when the black outs came in.
So all good in the hood. Still having lots of fun

Do you have some flipbook export in mind ? That would be awesome since the next update of our plugin Iliad is going to have a timeline to edit flipbooks.

Hi
Did some more testing based on your feedback, and though it wasn’t chrome :), I was looking at the dump folder c: emp\exports to check on external export status. I replicated this, also took a large bake anim with over 200 shots and that was 100% fine. When I did same test but looking at explorer randomly, thats when the black outs came in.
So all good in the hood. Still having lots of fun

I’m glad that you got it working proprely!

Do you have some flipbook export in mind ? That would be awesome since the next update of our plugin Iliad is going to have a timeline to edit flipbooks.

Hey!
Flipbook export is a great idea! I will test if it’s possible because the project is 100% blueprint (Editor widget) so I dont know if it is exposed, maybe it’s time to learn c++ for me :D.

Create Pixel Art textures with your 3D assets easily thanks to the Editor Widget Blueprint’s power!

Hi, can you show standard settings for default UE4 Mannequin with the outline and working normal map. I can’t get normal map working, also frame limit not working in preview (Didn’t tested export)

However thank you for great plugin!

Hello and sorry for the really big delay for this reponse (I was in my familly for christmass ans not able to return du some covid issue).

For the Normal maps what is your issue? The outline is added after the ‘capture’ of one frame and dont interfer with the normal map (so its basically flat). The normal map is only rendered of the 3D mesh itself. I’m currently working in a ‘3D’ outline.

Frame limit is only an render option but it’s a great idea to show the result in the preview, i’m taking note for futures updates, thank you :).

Hey bud, nice mod. Probably saved me hours of time and who knows how much money. Being able to create 128x+ pixel art with 20+ frames of animation on the fly is redonkulous. Paying someone to do it would have cost a small fortune, and possible a kidney.

In classic stranger on the internet style I do have a couple problems/suggestions/boohoo’s.

The sprite sheet maker puts the animations on either hori, or verti, but only in a single line. If there’s a wrap option I can’t find it, but that would be really helpful since the 8xxxk size limit means at 128 or higher resolutions longer animations end up getting trimmed and require recording at lower framerates. If it could wrap over multiple lines I think that would be resolved.

The ability to use a blueprint character, rather than a SKmesh would let you use modular characters/add equipment/etc instead of being “limited” to a single mesh. I think this would be a real boost in the power of this mod. A tier to S-tier kinda stuff.

Not to sound ungrateful, as mentioned I’m already using this pretty extensively. You’ve made 2d art styles accessible to un-artistic hacks like myself. For that, I think you.

Hello and thank you for the feedbacks :).

Recently I was working on an update to allow rendering animations without the need of a skeletal mesh for things like particles, BP and more and I will work on a full Blueprint integration like you mentionned but it will take some time to do.

For the sprite sheet I will try to add an option to have multiple row/column in the next update too, stay tuned. A workaround for this is to make multiples Horizontal ones and make another spritesheet with all the horizontal into a vertical one, the 8K with power of two textures is a ue4 limit so I need cheat a litle bit.

HI FRIENDS
Just bought this and it seems cool I have a problem though. I cant figure out how to set the skeletal mesh or play animations. Use selected browser asset just clears everything.

What is the process to add an animation to the screen and record it?

I figured it out. It was all my fault:(

I figured it out. It was all my fault:(

Hey! I am currently updating the documentation to make it clearer, what was your problem exactly?

@Sutivu How do I set the option to have no pixelation effects on renders? I don’t see an option in the 3Dto2D utility widget. Is there a variable I can change in the blueprint?

Hello @SUPRVLLAN What are the render’s resolution? If the texture is blurry try to right click on it → sprite actions → apply Paper2D textures setting. The texture group is Pixel 2D but the compression setting is maybe not updated.

Hi @Sutivu I test the render on different objects with different resolutions, because the objects are of different sizes, the result is not very satisfactory.
Is it possible to make a more pixelated picture in 256 by 256? and 512x512 expmle 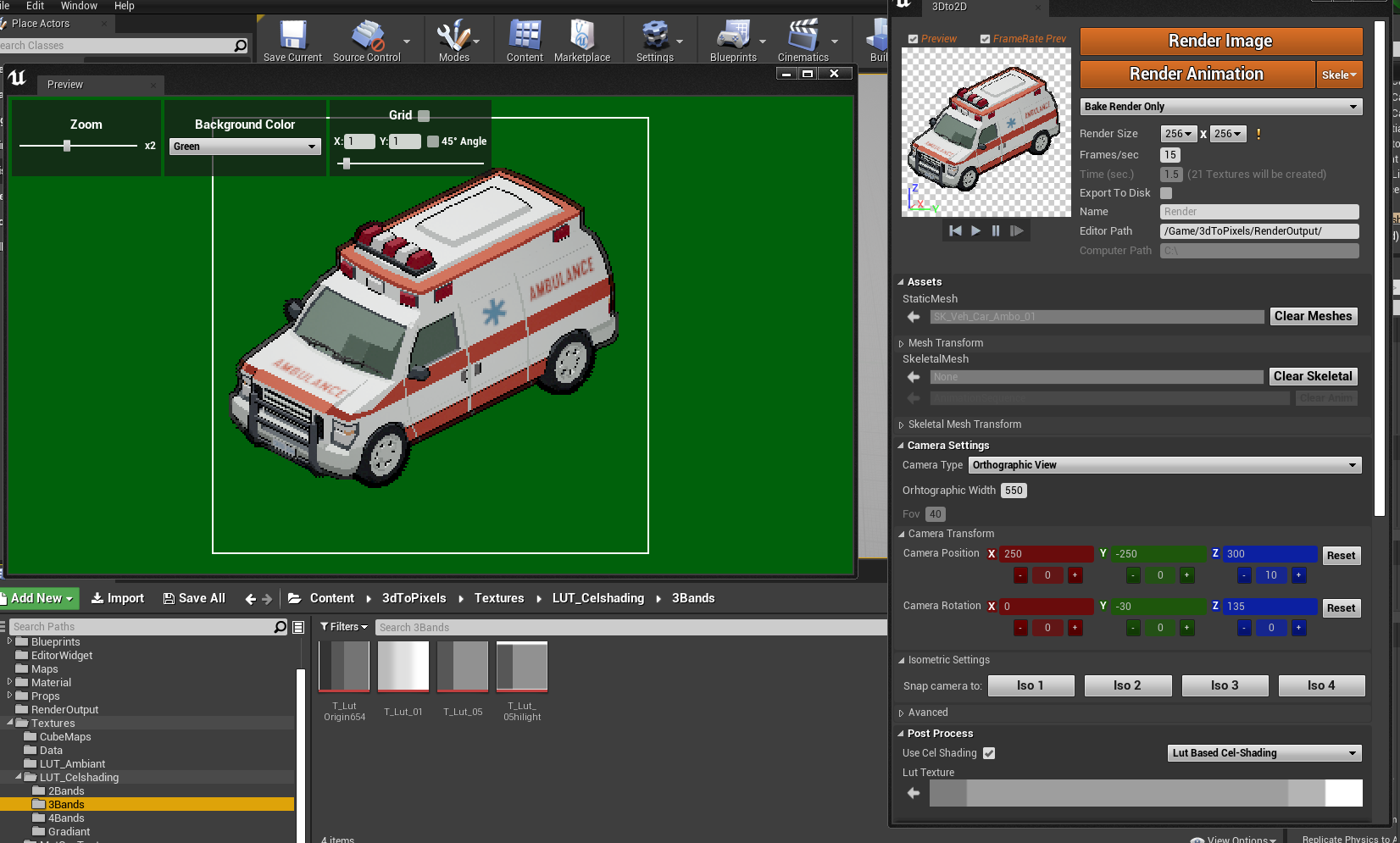 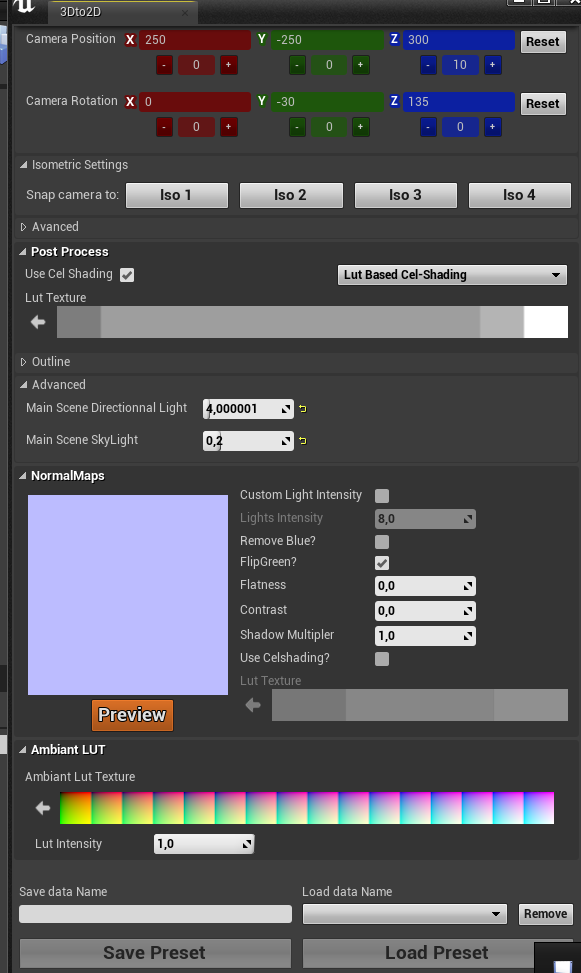 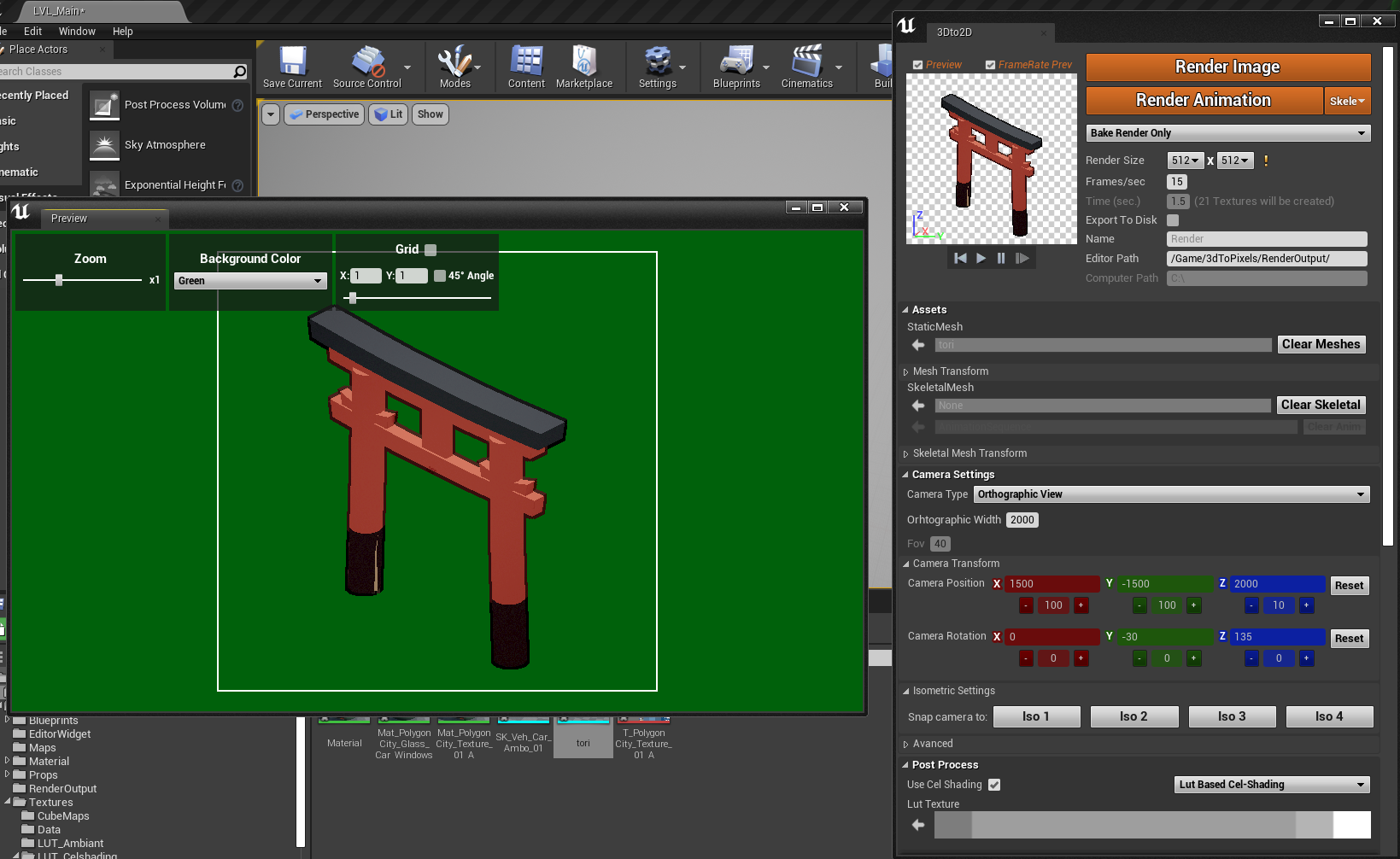 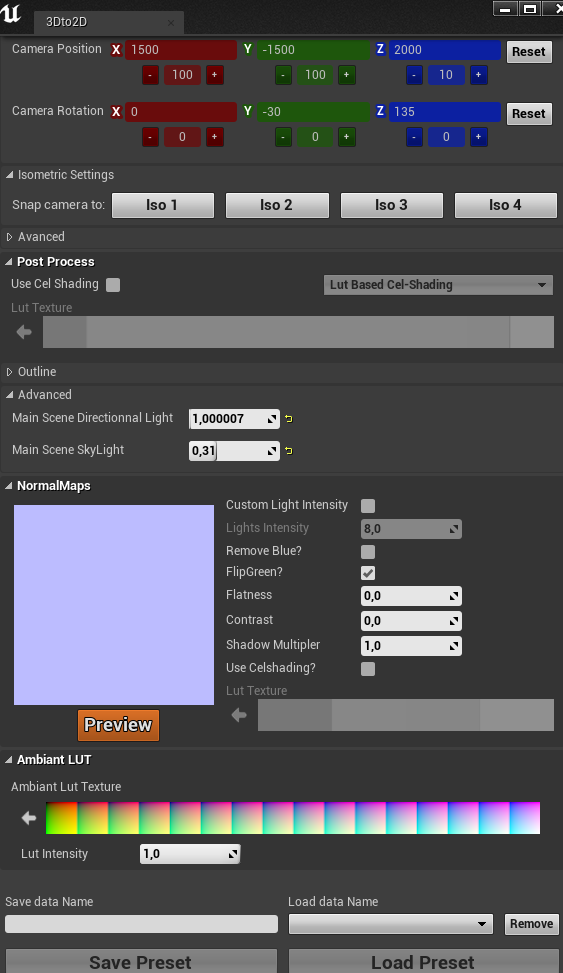 what should I do?

Hey @Treanek the pixalated ‘effect’ in pixel art is bind to the resolution. You need to reduce the size of the image resolution to have a pixel art look that you need.

I dont know what you want to achive but, if the size of the object is too big or too small for the resolution, you can change the Orthographic width (or fov) to match.
For example if you want a pixalated car at 64x64px but the japanese gate at 128x128px, make the car at 128x128px with the ortographic view doubeled (1000 instead of 500 for example). You will have the same amout of pixel in the car but with a 128x128px instead of 64x64 texture.

The pixalated effect is the number of pixels in the frame, like pixel art (sprites are usually not more than 128 by 128 pixel). Thats why I did not make a post process ‘effect’ to achive this goal.

@luuuuyang I made this video to show how you can do that in the editor (dont forget to set the object to movable) : 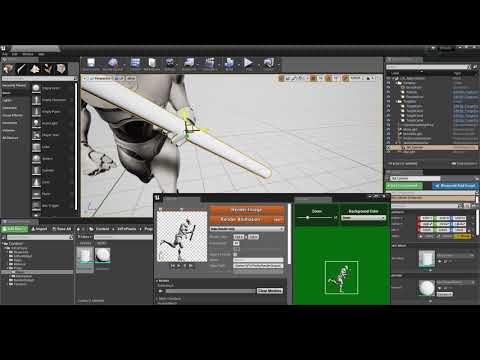