This is a space for you to share and discuss all things for the Winter #ue4jam! Feel free to share screenshots and links to your game project.

Reminder - This is NOT a submission thread. To submit your game, fill out THIS FORM by February 11th, at 11:59 pm ET.

Link to my game, made solely by me

https://drive.google.com/open?id=1yJ…ZcYDONPHnDVTsa Created with love by 2 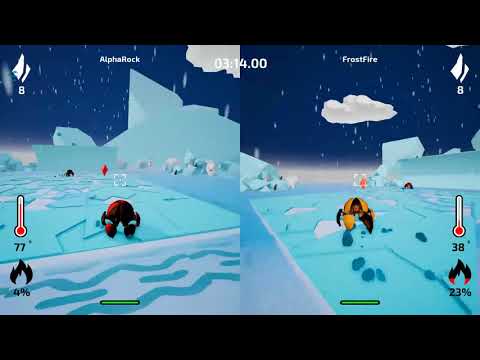 Aww man! After spending 6 hours on decreasing the size of our game!!! We finally managed to bring it down to 100MB category (~85MB).Early project size was 256MB , struggling size was 118MB
Never worked so hard in my life :P, It was so much fun and the pain was worth it!! Its 6 in the morning in India now Temp outside is 18 deg, finally can sleep in peace!

GamePlay
Requirements:Player 2 will need xbox controller, Player 1 has to play with keyboard and mouse. GamePlay: It is a splitscreen game,players objective is to collect as many crystal(orbs) as possible. You can shoot in walk mode only , there are 3 modes walk, fly and roll. Your core temp will decrease if you enter water due to freezing. If enemy hits you your rage increases. 100% Rage will shut you down for 8 sec and 0 core temp will also shut you down and give opposite player 5 crystals bonus. So try not to freeze your self. Also note shooting tiles will decrease integrity of that tile, but be cautious as the spyder uses ice below you to shoot balls which also decreases integrity of tile below you!! Walking or rolling on broken tile will sink you in water and decrease your core temp.

A game where you shoot out ice from under enemy tanks with your tank on some ice.
Everything made during the jam, except the options menu logic.

Drive through the track, rack up points by going through the posts, but don’t go too slow otherwise the ice breaks and you lose!

Controls WASD/arrows keys, left stick on gamepad for movement, space/A on xbox controller for jump, Esc to open menu, Mouse to use menu’s

Collide with your opponents into the water, 3 lives. Use your hammer to break the ice.

Steam must be open and everyone must be in same region.

Hello!
Here’s our submission: Bleak!
Controls are found in the options menu.
There are 8 zones, good luck!

Big thanks to Epic, eXi, some really good chaps who shared some awesome photogrammetry, and lot’s of other people and/or inanimate objects. Jam on!

Help Penn the penguin catch some fish, but be careful not to break the ice and fall into the freezing cold water!

Adventure Game - Action Adventure where you are a player attempting to have a snowball fight on a lake. Avoid other NPC/Players while throwing snowballs and attempting to make them fall in.

We have also added a tutorial level to ensure you know how to play the game mode before going in. Let us know what you think!

Penguins can’t fly - a challanging minigame, where you try not to kill the penguin by bouncing on icebergs

Controls:
W,A,S and S or gamepad left thumbstick to move
space bar or gamepad A to retry
escape or tab to go to main menu

(The submission post looks stupid, I’m doing this on my phone in the morning)

Trailer for the game
https://youtube.com/watch?v=rnICIlTftME

We originally made cutscenes for the intro, but the Cutscene-level refused to open other levels… So we recorded the cutscene & display it on an in-game TV-mesh.
Our Sound-design/Music guy actually used an analog synth to make most of the music, and parts of the sound design, which is pretty neat!

This is the complete gameplay of Unreal Engine 4.19 On Thin Ice Game UE4JAM Winter 2018. We hope you enjoy it.
This is a game about a tundra with bears and giant spiders as enemies. Subscribe to our YouTube channel.

Push your ‘snow stick’ into the ground and push away to glide along the ice. Push into the ice again to stop yourself. Navigate the frozen lake, avoiding the treacherous holes.

(Built and tested on Oculus Rift. Vive or MR support is unknown)

Description:
Why not build a factory on an iceberg? Naturally because it’s a really bad idea.

How to play
All you need to play is a mouse and a windows computer.

Good luck and have fun

Less sleepy version of the post on the other thread:

It’s set in a dark future where you must pose a robot made out of a cat food tin and lightbulbs for the amusement of of disinterested Kitty Overlords.
Controls: use the mouse to drag the ANKLES, **WRISTS **and **NECK **of the bot. It is unfairly difficult, sorry! (but maybe that’s because the cats don’t want you to win)

We spent around 24 hours in total on the game - nobody took time off from work and we weren’t going to skip sleep at any point, so I’m quite pleased with what we managed in that time.

Originally we’d interpreted “on thin ice” as “on your last chance”, which made us think of being held in judgement… that led to cats because there are no creatures more judgemental than cats… 3 days later and we had a game that frankly didn’t have a lot to do with the theme - so we put some ice textures on it. Ta-da!

TIPS
-Your little penguins will repair damaged ice floe fields!
-If they cant reach it simply tranfer them to it!
-Try trow bad penguins at each other for better results!
-Fish bone upgrade - +1 life to ice floe field
-Turret - will help you to protect ice floe!