Hello!
I wanted to show a game we (group of two) have been working on. It’s been tough since we had the Vive set on back order for awhile and only got it to start testing late June.

Anyway, the core game-play concepts and the first two SP areas are in the final beta stage. We’re aiming to release the game mid Sept.
It will launch with the SP survival (think COD Zombies) with a fully explorable area. (Not locked in one place).
There will be FREE DLC released shortly after that will add add a few mini-games, items and weapons. More excitingly though, multi-player. 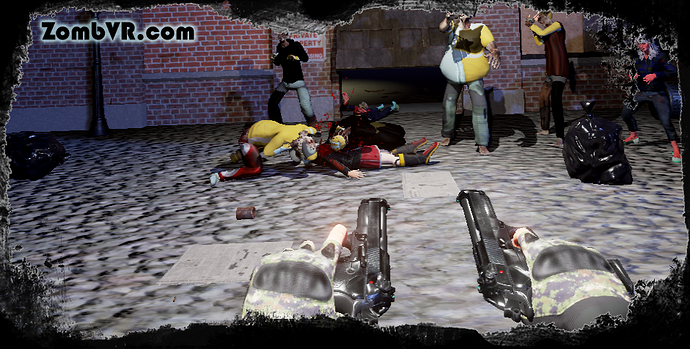 VR is a tough place to add MP since there aren’t easy ways to represent a fully moving body but we’ve got a good approach to tackling this for now and a really cool and kind of unique concept
for both Coop and Versus that will make playing with other people in VR pretty fun!

If anyone has a bit of a following and wants to try a beta demo build out and broadcast it, send us an email. We’ll be putting it up on our Steam account shortly.

This game is now on steam for Early Access: http://steamcommunity.com/app/523940