We’ve decided to launch a kickstarter to help with the last bit of funding to complete You’re Doomed, over the last 12 months we have put approximately £50,000 ($60,000) of our own money into developing You’re Doomed, and now we need a little help to get it past the line and to standard we know it can be.

In development by Black Dragon Studios based in Swansea, UK, You’re Doomed has its roots in the classic fast paced top down shooters that we all know and love such as Gauntlet, Smash TV, Alien Shooter, Cannon Fodder and Robotron X, keeping a retro vibe whilst utilising cutting edge technologies for blistering game play and ultra smooth, crisp visuals, thrusting you into combat arenas filled with wave after wave of unique enemies and challenging, pumped up bosses.

‘You’re Doomed’ takes place aboard a British deep-space star ship, the HMSS Robert Falcon Scott, named after one of Britain’s most eminent explorers, this is a scientific and exploration vessel designed to explore the galaxy. The HMSS Robert Falcon Scott is on a 42-year mission to explore the furthest corners of the British Galactic Space territories, having picked up a fresh crew and chocolate bars from Earth.

HMSS Robert Falcon Scott is a generation ship designed to be in space for decades at a time. The ship is huge, near the size of a small planet (or massive moon). The ship is primarily powered on coal mined from its surface and has a thriving industrial sector.

After a night of partying to celebrate Ruby paying off her student debt (age: 96, occupation: security guard), four members of the Robert Falcon Scott’s security team wake up near the ship’s core, in an engineering deck locker room to discover the ship has been overrun with an infection and the crew mutated. They must fight their way through the ship to the surface and escape pods before the ship’s computer (who’d really like to escape too!) flies the Robert Falcon Scott into the nearest star.

The game sees the players start in the belly of the ship in the industrial sectors, and they will have to fight their way through the ships mines, botanical gardens, stately decks, and technology centres.

We are planning to ship You’re Doomed on as many platforms as possible and as such we are currently developing the game for the PC, PlayStation 4, XBox One and the Switch! We’d love to get it out on the Mac and Linux too, and if we can exceed our funding goals we’ll be doing just that. 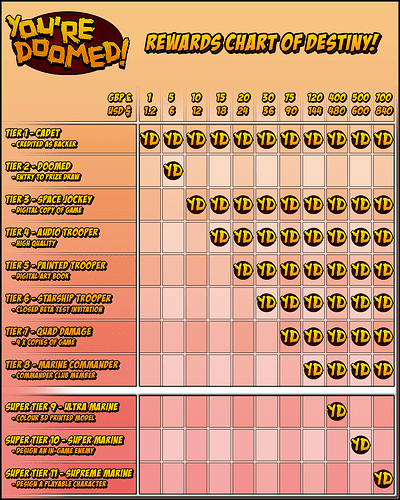 Black Dragon Studios is comprised of a small team of gaming aficionados with great respect and appreciation for the finer details in games and a combined background of over 20 years experience in programming, animating, modelling, scripting and audio creation. We have a strong passion for bringing you the most enjoyable and worthwhile gaming experience we can in You’re Doomed and with your help we can make it a great success! The Team is made up of Jon, Jules, and Chris.

Jon is the lead Artist on You’re Doomed, he is responsible for designing and creating all of the characters, weapons, animations, and many of the assets. Jon was also the lead Artist on the Copper Canyon Shoot Out (PSVR), for which he created all of the characters and weapons. Jon spent twelve years as programme director of a Games Design undergraduate degree, he led the programme through numerous changes to keep the teaching up to date with the contemporary and future games industry. He has worked on several research projects which involved using gaming technologies in fields such as archaeological visualisation and digital preservation.

Julian is the lead Technical Artist on You’re Doomed, he is responsible for creating all of the code and functionality within the game, as well as optimisation of the consoles and creating a come of the assets for the game. Julian was the lead Technical Artist on the Copper Canyon Shoot Out (PSVR). Julian spent five years lecturing on a Games Design programme alongside Jon. During this time he primarily taught the technical topics of video game development but has also taught on the polygon modelling and animation teaching modules. Julian has also been part of BAFTA nominated and winning games design teams.

Chris is the lead Audio Artist on You’re Doomed, he is responsible for all of the music and sound effects for the game, but Chris is also the public face of Black Dragon Studios and runs all of the studio’s public outreach and social media. Chris was the lead Audio Artist on the Copper Canyon Shoot Out (PSVR), he created all of the music and sound effects for that game too. Chris has a strong background in audio production, from traditional instruments to experimental and alternative methods of audio production in music and sound effects. Chris continues to develop and advance the studio’s audio methodology and to expand the role soundscapes play in the player’s journey.

Thanks for looking guys