I’m a huge fan of the anime Gintama and decided to try and recreate the interior of the main character’s house. My main goal of this piece is to get used to UE4, and also the PBR texture pipeline. What I’ve noticed (I may be wrong) is with all this new PBR tech, everyone seems so fixated on metals metals metals, so another reason why I chose this was to try and stray away from the metalness.

Some of the images I’m referencing. 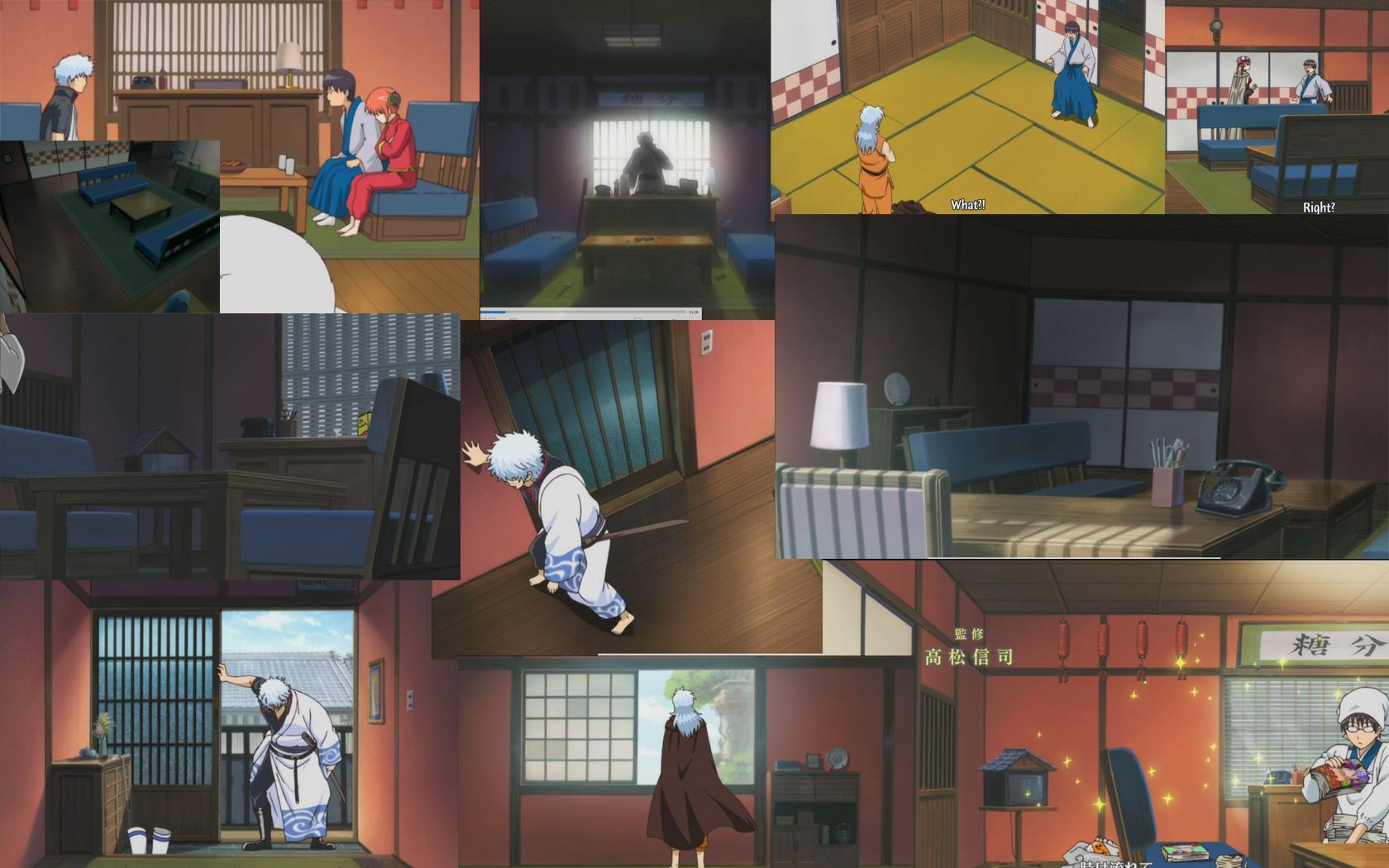 What I’ve got so far

It’s not much as of right now. I just set up the master materials for the wood and the wall plaster that I can apply to all the modular pieces for the walls that I’m currently making. Right now I just have the wall panel, 2 wall panels with overhang variations and the ceiling which is just a normal map i modeled then baked onto a plane.

Good start! There is/was a “Stylized” sample from Epic a while ago. They have not announced anything about it on the Marketplace, but I can only speculate they might re-release it to the public at one point. It could help you out with non-PBR realism shaders.

I finished the wall pieces and put it all together. Next I’m going to start working on the doors and windows. 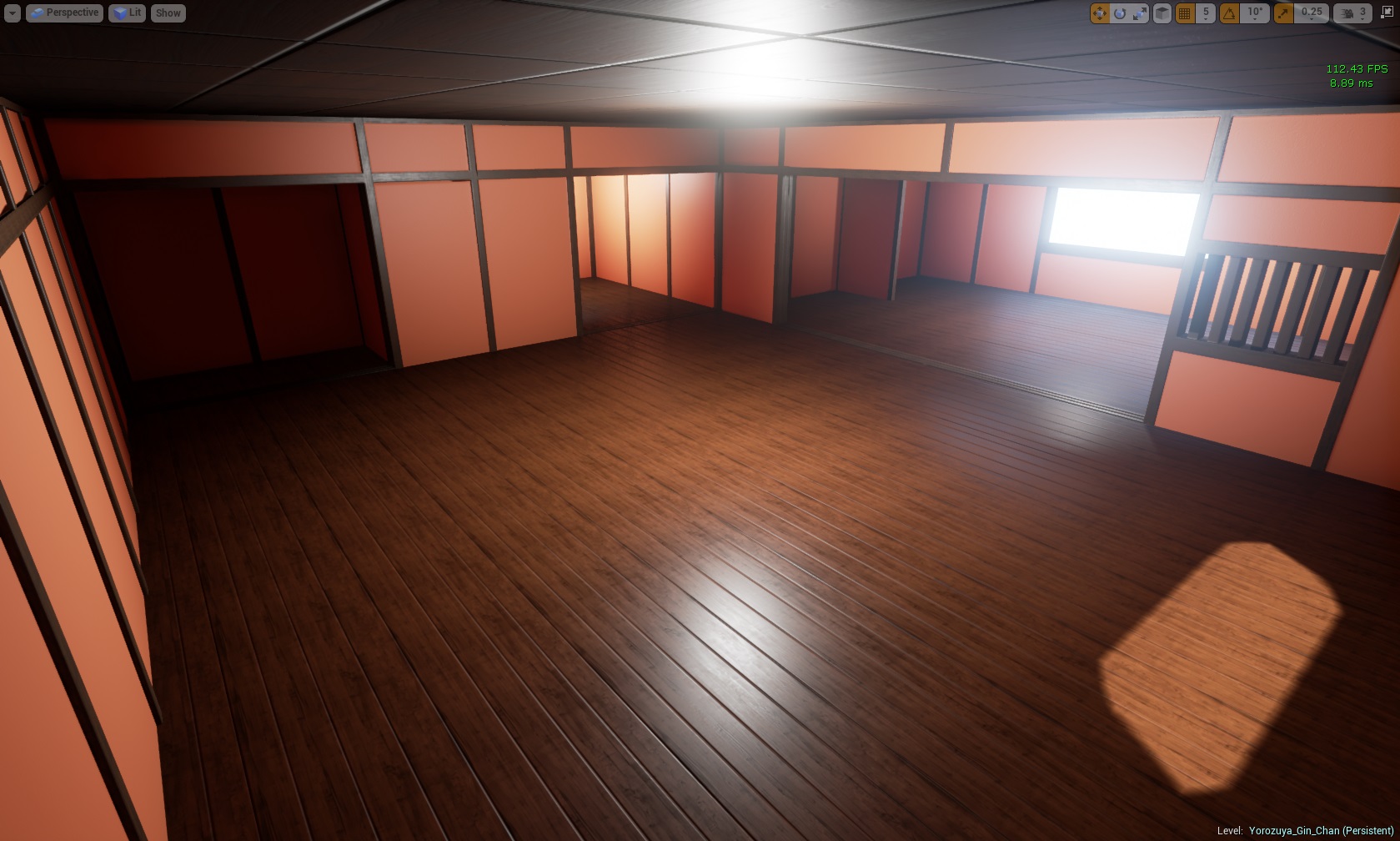 I’m getting weird lighting errors on some of the models, even though I have light maps I made in 3ds.(I just used a flatten mapping on my model after I unwrapped it)

maybe you need to make lightmaps?

Just seeing the name of sakata made me jump and connect to my account.I love this kind of projects!I have something similar going right now in udk but its more comic book style.I dont have the ue4 but here are some tips to make this great.If you want to approach the anime style first you have to get rid of the speculars on everything.No shining.Make it look flat shaded.Those high lights shoud be painted very gently over the textures in the appropiate places.I supose you can paint with a texture over a mesh in ue4.No realistic textures when texturing.If you use some adleast blur them and use a photoshop filter on them to make them more toon like.A thin outline post process will help the scene alot.Try to use only one light source in a room in order to keep alay from realistic shadows.Make the wood texture on the floor more simple.
Now something hard that i havent tryed but it will probably help.All of the meshes on the scene shoud not cast shadows.Paint them in the apropiate place just like the specular.It takes some work but for a small scene its not gona be hard.Paint only the bigger shadows with a brush that blurs them slightly on the edges and make them very light and close to transparent but not too much.It will take some time for your eyes to ajust to the scene and style and remember that this is still 3d.And in anime you are we always looking at one angle.Hav¡ng the option to move in 3d many times ruins the idea but it its achievable.
Here is an example of some of the rules ive noted but not all.
http://postimg.org/image/jyjv4e1g3/

Mine is still too chaotic because i’m following a comic book but yours is going to be much cleaner since its manga.
Good luck!

O and if you are going for a more realistic type the thing you are doing right now is good.Its all the matter of style you want.Looking at this http://www.youtube.com/watch?v=hD7k2vtj_ys
You can see that there is no cell shading.Its just the way you are doing it.So before you jump to changing techiques(which require time) you shoud think what you really want.A 100% representation of the anime style, halfrelistic type anime,ore just a representation of the scene with modern techniques.Looking at your scene right now keeping the style like you have it now will probably be better.
Are you gona make some of the characters and import him inside?

@AzamKhan I said I did at the end of my post haha.

@O_and_N Thanks for the input! I’m going for a realistic rendition of the anime this time around though. I haven’t messed with creating characters or anything, but maybe after I’m done with the scene I’ll look into it.

I added a few windows, the fusama sliding doors, and did some rearranging of certain walls and areas.

Looking good. I feel that the wood floor texture is tiles too much along the planks, making it very easy to see repetition. Take a look at 3dtextures.com you may find something more suitable there or just play around with the tiling options.

Yeah, I’m noticing the tiling a lot too. Once I get more assets in the scene, you won’t be able to see as much of the floor as you do now, and I’ll mess with the tiling once I’m fine tuning everything.

This is coming together very nicely, very good work.

After spending some time learning Substance Designer(WHICH IS ******* AWESOME), and re evaluating how I go about making PBR textures, I learned a lot and then continued to work on some more props.

Even though the props are small, every little prop adds more and more life to the scene.

Looking good!! would definitely look at the stylized project on the marketplace! Cant wait to see where this is going! Keep the good work!

I fixed up the bedroom quiet a bit, added the sword, some shelf space, the poster, added his poster above the desk.