So there were a few modules missing from Cascade between UE3 > UE4, so I’ve decided to make them myself

Size By Velocity and Size Scale By Time are my first targets. (Yes we do have SizeBySpeed, but that’s limited to GPU particles only). The possibilities are endless! Please share my enthusiasm as I have virtually zero C++ or programming background of any kind… 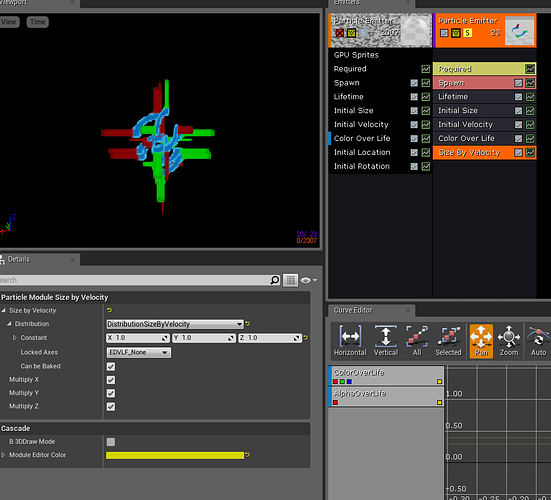 I honestly expected a massive crash with this one, but it currently appears to work just fine… It needs some more functionality to match it’s UE3 counterpart but hopefully I can manage that too. Could anybody quickly tell me how to return the vector length of the particles velocity? currently this is my implementation:

What I need to do is get the length of (Particle.Velocity), as the implementation is designed to be similar to Size By Speed. I guess though, I could create a radio box like ‘bUseVelocityVectorValues’, to scale the particle according to it’s direction perhaps?

Now if I could just figure out how on earth to use GitHub properly I can submit a Pull Request for it once it’s finished… I’m assuming that this sort of thing is suitable for a future engine update?

Wow this is awesome TheJamish!

I can’t wait to see what other cascade modules you come up with!

you can create a fork and clone with these steps

then you should create a branch using the same link

Git Hub “Save You Lots of Time” Tips

so have a backup that is not within your repo directory

I fixed my implementation to use the vector length, so it works ‘properly’ now. Although using the individual vector components gave some pretty entertaining results… maybe I’ll leave a radio button in to let people keep that functionality

Just need a Cap Min and Max size now to finish it up.

Video of it in action so far: 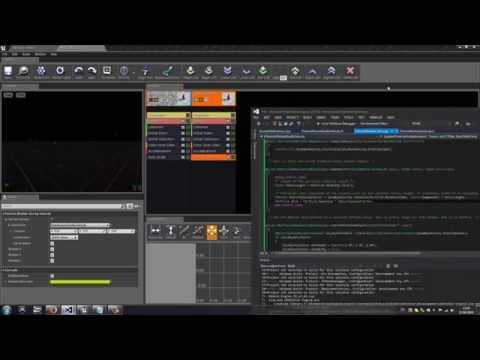 Rama, as the only person whose made a plug-in for the engine so far that I’m aware of, how easy (or possible) would it be to make something like this as a plug-in rather than a change to the engine? I might venture into making some kind of advanced module pack for Cascade that adds some cool functionality to it.

Rama, as the only person whose made a plug-in for the engine so far that I’m aware of, how easy (or possible) would it be to make something like this as a plug-in rather than a change to the engine? I might venture into making some kind of advanced module pack for Cascade that adds some cool functionality to it.

You need a way to tell the end user’s UE4 engine to use an alternate set of code, stored in an alternate class.

For my purposes, I was able to extend the UnrealEdEngine, a new class, and use a config file to tell UE4 to use my EdEngine class instead of the main class.

So you will need to look and see, or ask Epic Devs, whether there is an easy way to add in new modules as additional classes, via config file or UnrealEdEngine.

This is really a question for them to answer, and if the functionality is not there

well done Jamsh Cant wait to see what else you can do.

Very cool and congratulations!! This is the first example of an extensible Cascade change that I’ve seen since our launch in March. Given even we haven’t attempted Cascade extensions in a plugin module yet, I’d love to hear about what obstacles in the engine that prevent you from doing this as a plugin. Basically, what you are looking for is being able to compartmentalize your changes in a standalone module, whether it is a plugin or not. Either way, very cool!!!

Currently I had to make a couple of changes to what look like some very core files, ‘Paticle_Helpers.h’ and ‘ParticleModules_Size.cpp’, what I could probably do is compile a new Engine.dll with my additional code in it, and tell the engine to use that in a config file the same way Rama did it, but I’m not entirely sure that would work. (Rama do you have your plugin source available anywhere to look at?)

Of course the problem with doing that is if anybody else made a Cascade module, or a change to another part of the editor they could only use one at once, and not use multiple plugins with each other. My aim would be to make it a completely modular piece, but it might be that I need to first make Cascade scan some external files if the plug-in is turned on and that would mean changes to the core code… somehow. Once again I’m a C++ newbie so this is all a bit new to me

Why don’t you try to submit this directly to UE github? it’s not a big change. Also isn’t in Unreal style those modulas should use “Over” insted of “By” like “Size Over Velocity”?

Why don’t you try to submit this directly to UE github? it’s not a big change. Also isn’t in Unreal style those modulas should use “Over” insted of “By” like “Size Over Velocity”?

Because:
A) I can’t even update my fork to 4.1 let alone submit something on the complete mess that is GitHub, and
B) I just named it after what it was called in previous versions of the engine. I dunno, size over velocity sounds odd, and its a multiplier, so ‘by’ velocity seems to fit better

Delete the fork and fork again?

I want to experiment with some other not-yet-seen-before modules too, working on some cool stuff atm like alternative ways of camera-facing sprites etc. Just landed myself an industry job so times getting thin

Congrats on the job

If you ever do want to play around with it again, a rotation on direction would be cool.
(so the particle rotates towards the angle it moves.)

Unless im totally derp and didnt notice one.