Would be really useful if ShooterGame conformed to the Animation Standards...

At some point hopefully not too far into the future, would it be possible to re-rig the characters and weapons in ShooterGame?

Currently it’s impossible to use any marketplace content with it, such as Prototype Weapons for example, without taking everything into MAX/Maya and re-making them ourselves. This is a pretty long-winded process and I’m surprised that it doesn’t already follow the same animation standards. It makes ShooterGame content very hard to integrate with… well anything really.

Bump! Would love to hear an official word on this! Don’t wanna have to re-pivot all the marketplace content I bought

We don’t have a good solution yet. We could support Epic Skeleton for FPS, OR support retargeting to work with World space, but that needs some good testing. Right now animation retargeting works on relative transform to parent, so if you’re missing parent (for the case of FPS), it won’t retarget correctly. If you have all chain present up to all hands, it can retarget correctly.

We added ticket for investigating this. Apologize for the delay.

No worries, good to know it’s on the radar. Thanks Lina

So I’ve looked into a bit, and you will be able to use retarget system to do this with 4.7. I fixed a couple of bugs with it, but you’ll have to modify your rig data to use World as basis of conversion. 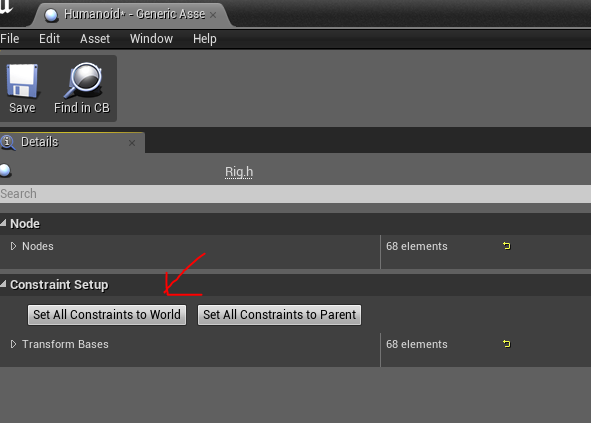 Currently Rig is the asset that contains how to convert each node data, and by default it will all base on parent because that is often a safer way to convert animations, but in the case of FPS, since it doesn’t have parent, it won’t work correctly.
If you change it to use World, and use that Rig to convert all animation, it should work correctly.

I’m attaching ShooterGame example of the conversion. (Right Index finger 3) doesn’t have any weight, so it is different, but other than that, it does convert fine.