Does anyone know of any way to transform an actor’s world transform (3d) to screen coordinates (2d)?

With the “Project” node.

Found it right before you answered. But thanks!

I was messing around this node and i cannot get it to work.
I keep getting" ErrorPin target must have connection" but i did !
I passed on a make vector value, and outputed the coordinate through Project node…

Show a capture of your BP

initialy i was using the position of an actor in worldspace but i simplified it even more for the tests.

What Blueprint are you trying to do this with? Is it the Level Blueprint because that won’t work. When I mouseover the error message the tooltip tells me that it won’t compile because the BP that I’m trying to use the “Project” function on is not a HUD.

If you create a new Blueprint, expand the “Custom Classes” dropdown, then either find or type “HUD” in the search box. 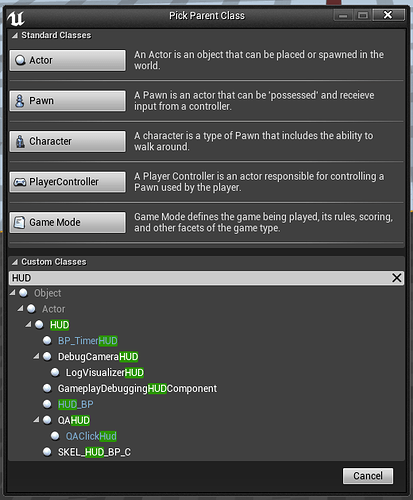 You should get a short list including one simply titled “HUD” which describes itself as “The base class of the heads-up display” pick that one, cut and paste your existing blueprint projecting code into it and it should work just fine.