World Composition With Large Tiles to update guides / How to get 16km tiles?

My game involves a port with a bar, barracks, heathe pldquarters on a naval base that juts out onto a river, the player will then be able to take control of a ship pawn down the river and when reaching the harbor mouths end the open ocean dynamic level will load.

For the port area I need to use world composition (for single player for now) to get a 64x64 (or 8x64 W*L if thats possible) km terrain outputted in the largest tile sizes possible (least number of sizes, biggest landscapes) sice hte player will be moving at up to roughly 50km/hr so dont want constant loading and unloadin of a couple hundred tiles, let alone dealing with them.

That said when I use the settings 505 and 1008 in the build extents and tile resolution, respectively. With a tile count to get me 64x64 km it works fine. When I bump it up to 4033 and 4033 to get 4km tiles instead of 500m tiles and use 16x16 it failes with the weird super fast build seen below, and outputs a single, unuusable height file even though I selected tile build.

But when i select 2x2 tiles all the same settings it works fine outputs 4 totally perfect tiles. No crashes lots of scratch disk space, not killing my ram at all.

Im using a .png heightmap into the height output node as seen below.

Secondly,
Its said you can have a 20km terrain in unreal, although the stock landscape generator can only do 8km. I cant even export 8km from world machine it seeems (i tried 8065 and 4033 in both combinations and all failed nothing output despite all tiles saying “built” 2x2 or 8x8) so how would I get 16km terrains, let alone the full 20?

TL;DR: My game will work better with the largest terrains possible compositoned together, only a 2x2 tile build works on 4033, 4033 settings and how to get 16 or 20km terrains which unreal advertises? 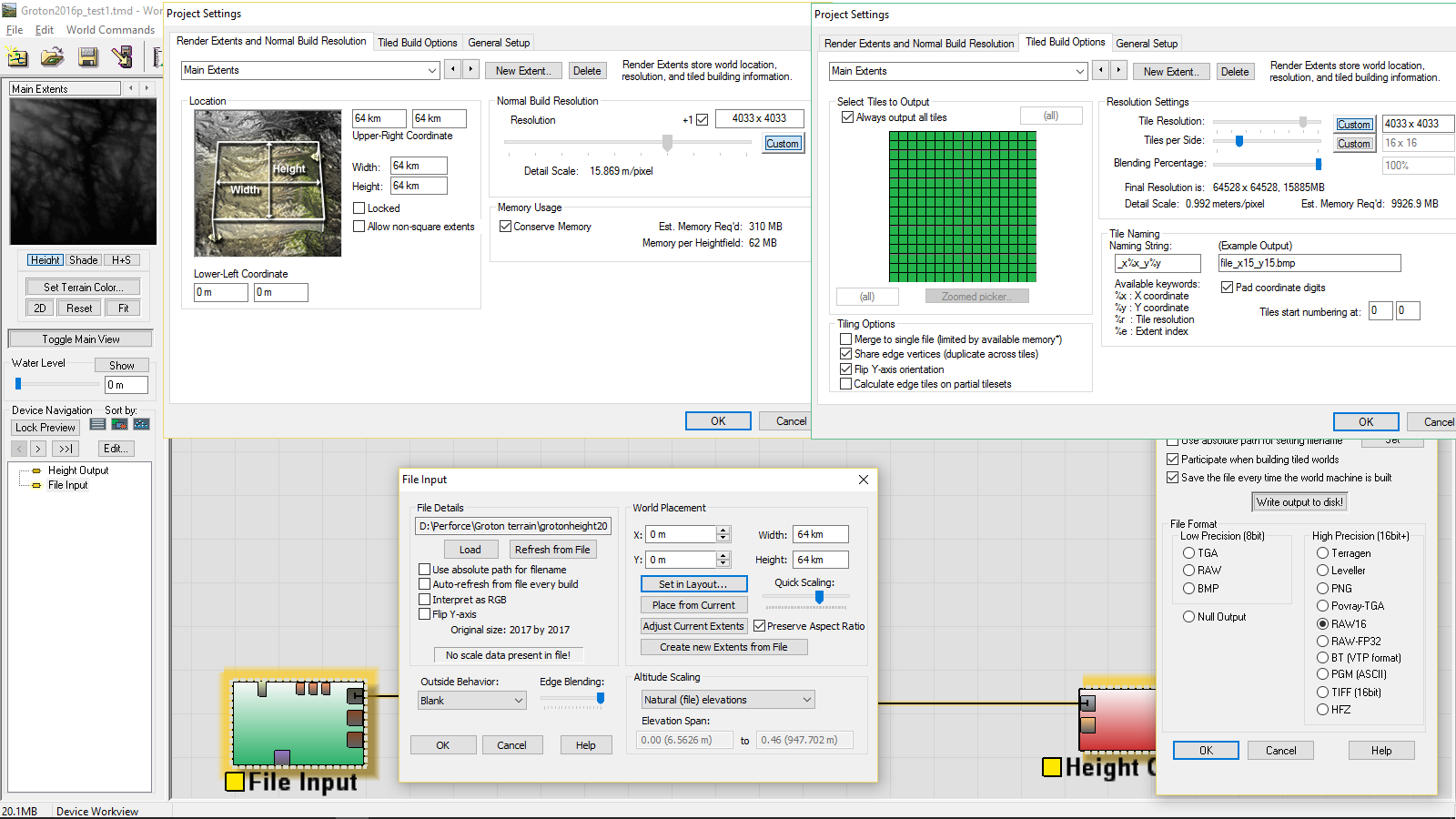 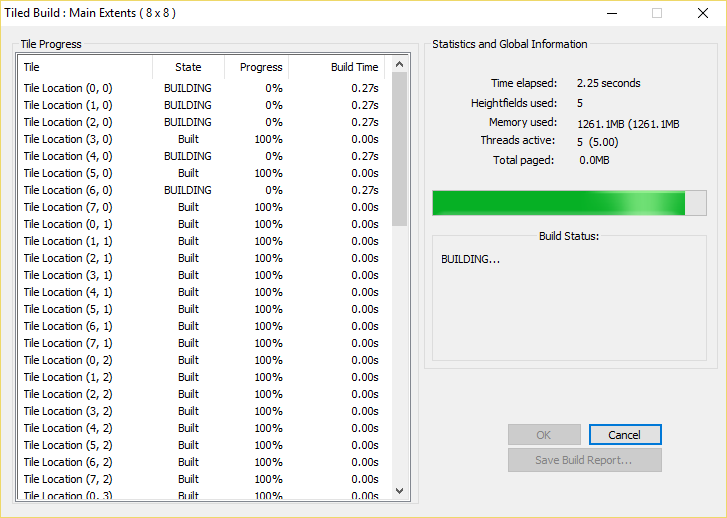 I should note when I try a 16x16 build on 505 x 505 and such it builds all 256 tiles fine, but unreal says it cant create a landscape from the samples. I do not want that many tiles tough when the terrain wont be used, only the open water and a small base maybe 1km x 1km

You can do 20 km x 20 km landscapes with 4096 x 4096 heightmap textures just fine. You just need to change the scale of the landscape. Though landscape will be lower res since the vertices are further apart from each other.

You can do 20 km x 20 km landscapes with 4096 x 4096 heightmap textures just fine. You just need to change the scale of the landscape. Though landscape will be lower res since the vertices are further apart from each other.

This is what I suggest you to do

1. Tile resolution should be set to 1009x1009. With that, each tile would be approximately 1km.
You would then generate a LOD per tile using world composition and set a distance for the LOD to appear.

Lastly, I got very confused when I read the text in OP. If possible attach your world machine file and explain what you want to achieve in a line or two.

I got what i wanted roughly with what the first poster showed. Will upload the WM file later its nothing special though just a heightmap file in, heightmap out, 0-2048m elevation, 4033 on both resolutions and 4x4 tiles, scaled 4x4x4 x,y,z to get 64x64x1km or so its working half decent but my water is clipping throh the terrain due to the water depths not being deep enough, gonna have to adjust my heightmap contrast or elevation data and reimport.

Will get back, this is the first one thats worekd as desired mroe or less (the scaling… for anyone that wants 20km terrains thats how ya do it!)