Hey Guys, I trust you are all well.

So I encountered an issue. I created a character bp with a shopping cart and the capsule representing the player (fps). I attached the cart mesh to the camera so it follows the camera accurately. Collisions with dynamic objects work just nice BUT when theres a static mesh, the cart just clips through. I have tried to add a collision but whatever I do, only the capsule bp collision is repsected. I have not found a solution for this. In unity you can render the fps components into a seperate layer making clipping impossible but unreal doesnt allow this afaik. I was wondering now, how could I make the static meshes respect my carts collision? I am not very experienced so a custom pawn is hard for me especially since there isnt much documentation for it. I have tried to adjust the capsule radius whenever the cart hit a static mesh, however due to the shape of the cart, it makes my character leviate off the ground which is very noticeable.

That also leads me to think, how does one handle big characters where capsules are simply too inaccurate? What if my character has big wings or a big wide item on the back, would these always clip through doorways? And what about big characters? Can you have individual limbs as collision for stuff like bullets etc?

Any help is GREATLY appreciated as I am currently stuck with my project. 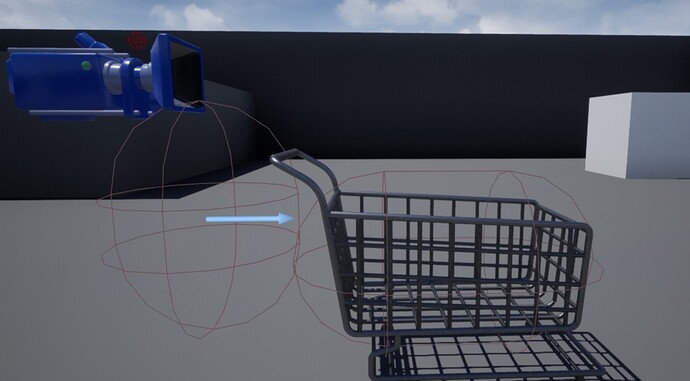 So Unreal is a bit different from unity so I have felt your pain.
Unreal has something called Collision Responses so you can try to play around with those settings. Example: Set the Object Response on the Cart to BlockWorldStatic.
Here is a link which describe how their system works:

Choosing what collides is obviously very important, but it can be tricky, and it’s a problem that we have spent quite a while discussing while developing UE4. The system we have can seem a little complex at first, but it is very powerful and...

Now to answer your question, " how does one handle big characters where capsules are simply too inaccurate":
Unreal normally use a skeletal mesh which uses their “PhysicsBody system” where there are a lot of colliders attached to the skeletal mesh
Link:How-To Create a Physical Animation Profile | Unreal Engine Documentation.
The Capsule collider is mostly for movement and the skeletal mesh would probably have items connected to their Animation Blueprint system where they can have “fake physics”.