Well, I always start my development process through a storyline and searching tons of references to help me guide with the story, mood, feel and general architecture. From these I make a moodboard that looks like this: 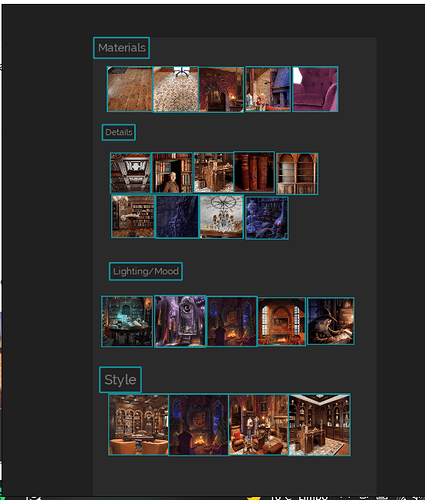 First of all I start to write a small story to help me achieve a mood in this environment and help me base my choices.

Location: Somewhere in Scotland
Age: 19th century
Story: A wizard lives in a forest near the city. He is loved by everyone and is known for treating the wounded and sick. His house is full of mystical trinkets and several rare books.
The city is passing through a tough time since there is a new disease that’s been killing many of its inhabitants. The wizard works relentlessly day and night to find a cure in his secret lab and help once more his beloved friends.

Somewhat this story reminds me of the song “The Wizard” from Black Sabbath. Also this will be my small homage to all of the health professionals around the world who is working day and night risking their lives to save our family and friends from COVID.

Now that the story is written, I began conceptualizing some of my ideas in my head, and though I’m not a great concept artist, this step helps me a lot to quickly see what I’m looking for without too many effort. 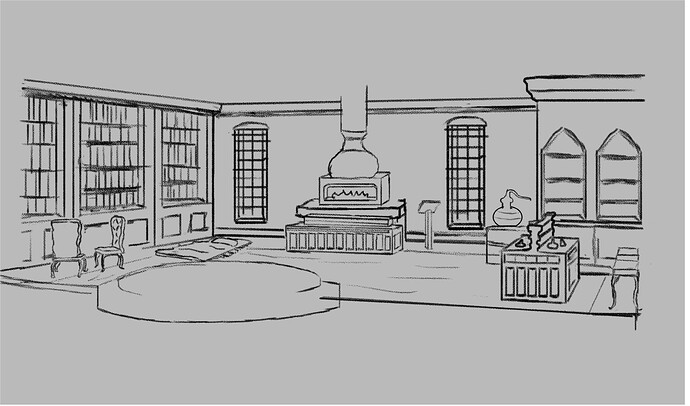 Here’s the concept for the secret lab on the Wizard’s house. I also made some blueprints to help me see the gameplay flow and blocking the environment. 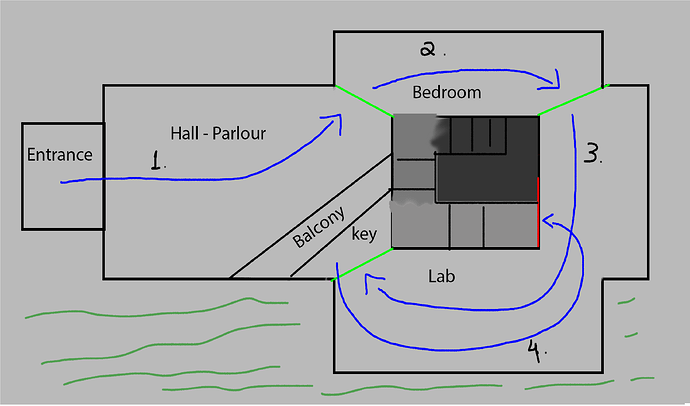 Notice that I did only the concept and blueprints of the interior? That’s because initially I wanted to do just the interior part of this environment. But then I realized that making only the interior wouldn’t achieve the mood and support the storytelling that I wanted, so later in the blocking stage I decided to make a small exterior.

The next post I’ll be detailing more the blocking process inside Unreal Engine.

It’s time to do work on the blockout stage! 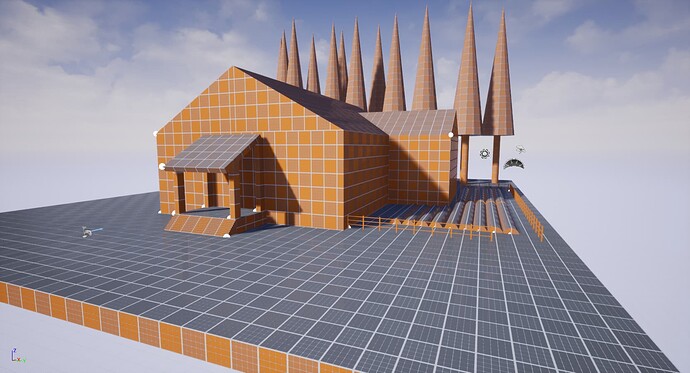 This is the very first blockout that I did. I tried to get mainly the shapes of the house, proportions, and measures as well as gameplay area. 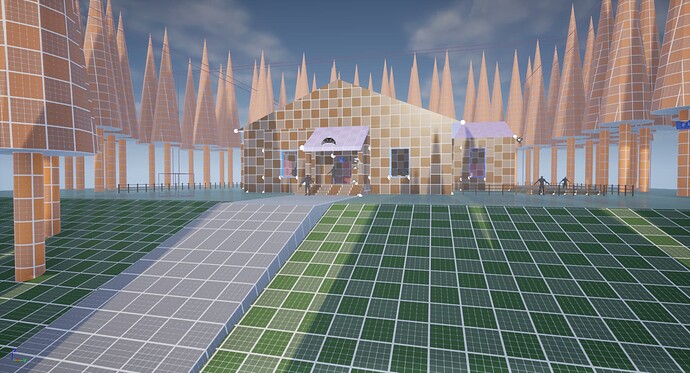 ScreenShot000031663×899 188 KB
Later on I started to work in the house interior and some of the exterior landscape too. The exterior is still the same through many of my iterations and I’m not satisfied with how it looks. So for the exterior I’ll take a step back and doodle a little bit more, so I can make a consistent environment with good quality in both areas. 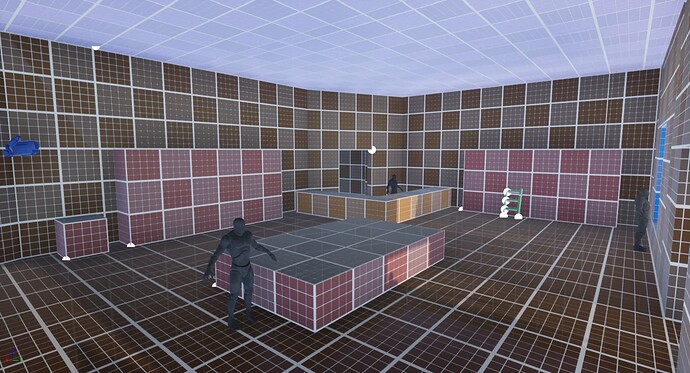 ScreenShot000041663×899 199 KB
This is the entrance room for the house. I made it like a store (a drug store, for example), imagining that many of the citizens that lives nearby will come to visit the wizard and buy some of his medicines. It’s important to mention that the blueprint mentions the lab and the bedroom in different places that they currently they are now, that’s because I thought it would make more sense that these rooms have a different purpose, so where the blueprint indicates the lab is now the wizard’s bedroom and where is the bedroom I created a kind of a living room where the wizard would have important social meetings. 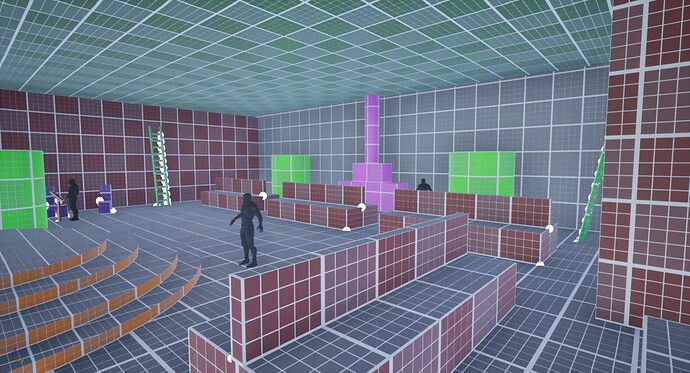 ScreenShot000051663×899 191 KB
Lastly I made an underground lab and this one I followed the concept from the previous post. After blocking it felt that a few things needed to be readjusted (such as the back wall, it’s very different from the concept), and that’s the good part about doodling and concepting, you get out ideas from your head and when you put them into action your mind is free to just imaginate more and further improve what you’ve already creating, turning something good into something amazing

So I was really satisfied with how the house was blocked and how the gameplay flow was going in this environment, and in the next step I would download some placeholder textures and experimented what of material would be in each wall, floor, exterior, etc.

Now for the material testing stage. At this point, I’m not trying to make beautiful and complex materials, I just wanted to see if the textures that I’m imagining for the structures would fit and look good. Think of it as a “blocking stage” for the colors too. 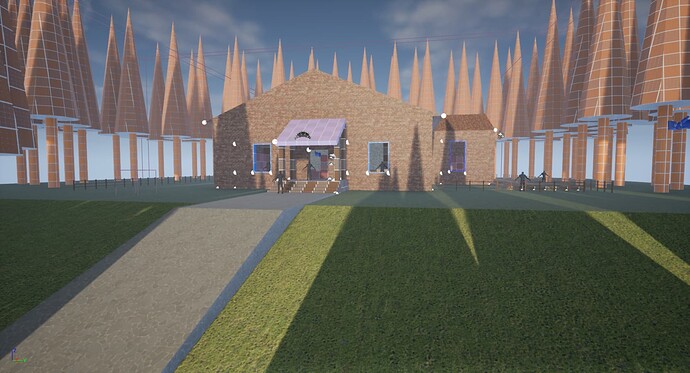 This is the overall look of how the environment is right now. As I said before, I’m not 100% satisifed with how the exterior looks neither its gameplay flow.

Usually this kind of straight to the point gameplay into open areas gives the player sense of no direction and in my opinion reflects some lazyness on level design perspective. So after I return to Unreal Engine I will redo this exterior part so that we can have a “Wow” moment. 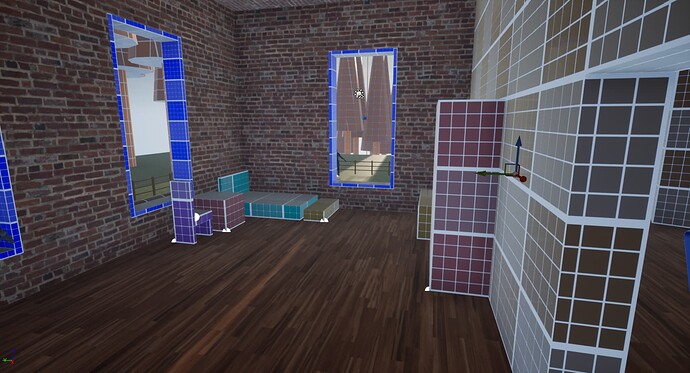 This is the wizard’s bedroom, it may look empty now, but upon further development this room will have tons of storytelling elements that I hope will make it come to life. With the blocking step almost there, I jumped to the materials creation step, this is where I make some tiling textures based on the blocking textures using Substance Designer and start to create the final meshes.