Hi EU community,
A just want to share you my experiments in run-time object fracturing. For now, it just a prototype but I working to make it usable and functional. I will update the post with the tools development progress ! You should probably use the RMC though and not the PMC, it’s faster, better and just better

It will help you to get good performance with what you do.

Thanks for the advice ! I will try with the RMC

Interested in seeing how you progress with this.
Briefly looked into triangulation methods for shattering glass.
Was always worried about the performance hit vs. actual benefit for the sake of nice breaking glass

**Update 1 : **
Multithreading is now fully working, the game thread is no longer blocked by the fracture computation ! 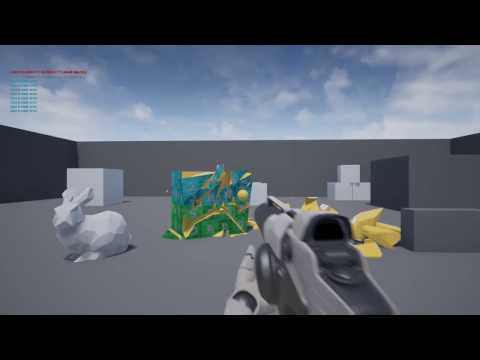 Towards the end of the video your framerate is getting quite low, what is causing that? Just the amount of draw calls you get from having so many small pieces, or is it the physics simulation for all of those?

The low framerate mainly comes from the number of draw calls. In the future I plane to add a fragments lifetime delay to limit the overhead

It’s awesome, which methods are you using to solve the fracturing? Some custom finite element ? is it possible to run some Python over UE4 ?

Until now I solve the fracture using a convex decomposition of space, I try to let the most artistic control as possible. But I am trying to change the method to be more agnostic and not only voronoi defined

Hi lunix !
I am working to make it clean has I can to publish it.

Shutup and take my money.

Armabon, do you have any ETA on when it will be ready?

Hi clarkelaprairie ,
I am currently working to implement a small 3D voronoi diagram generation in order to make the tool more light and efficient ( by removing CGAL from it).
I am thinking about publish it at the end of April or May beginning.
[TABLE=“class: CDResTable ie7Fix, align: center”]

Is it possible to have an explosion(using the explosion as the driving force) in the scene that would cause the fracturing to happen, like a grenade tossed into the scene. looking forward to this coming out

Hey, any news on this?