I’ve been dying to do a Paper 2D project and finally decided to start one now since I’m taking a break from my other project, Ninja Arcade. I have one or two side projects that I tinker with now and then to try new things or to work on to force myself into another line of thinking with another project. It helps me to be more efficient in my main project.

So, this new “side” project, Ninja2D, is something I just really always wanted to do. Something to “compliment” Ninja Arcade, almost like the one is a remake of the other, though it’s a bit backwards…

Having worked on it now for a few days, it’s just so much fun. This of course also being a Blueprints only project but just so much simpler to deal with than Ninja Arcade.

So what I’ve got going on in this currently is the basic player functionality… (not all fully animated yet)… and I’ve started to get a feel for level graphics / look and feel. At first I considered going 8bit style and as cool as that is, and I love that era of games and the graphics style, it’s not a fit for me. So I’ve decided to make it look more modern, more 16bit plus… if you will. It fits my way of working and thinking much more. So I’ve started to work out how to deal with that stuff, working out my creation process and layout methods… etc. It’s a fun process and I think I pretty much know how I will make things and have them work… etc.

Anyway, as always I’ve got a little video to show what’s going on. I guess you can spot the “temp” stuff a mile away, but you can see some stuff starts to feel like it belongs there. It’s still super early in development, only a few days in, maybe a week, so it’s rough but far enough to see where I’d like to go with it. 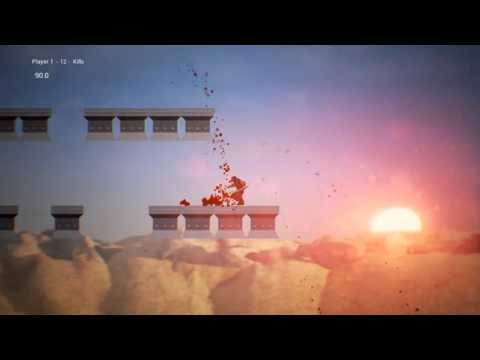 2D / 3D… maybe place one inside the other like films sometimes do (Kill-Bill / Kung-Fu-Panda)…?

Is the pixelated Ninja intended? Other than that, It looks great. The jumping has a bit of a unnatural floating/lack of gravity feel, maybe fix that & it will be great.

I think this 2D side scroller is a rather crowded market, how do your game intended to stand out.

Maybe you can explain more about your game design. E.G will it has some form of upgrade system, weapon swap, inventory etc.

Cool, thanks for the replies guys, appreciate it.

I’ll just say that this project is just off the ground, the video was taken just less than a week into the project so what you see there is so early, it’s not worth talking about quality.

I am experimenting with graphics but it is ultimately based on pretty low res sprites, as it were back in the day with old school consoles, maybe SNES time period.

The jump of course, sure it will seem floaty, but it’s a choice based on “feel” not looks. There’s nothing to really “fix” there. Is the current setup the absolute final?.. well… I can’t say, the project is far too early to make any assumptions at this stage.

As far as the game goes, can’t really say much there. I don’t write documents about anything. I just think of the next thing and then do it and build it up. I have an overall idea but it’s a very simple framework. Number one thing, is the basics fun and working solid, the rest I care about later on. Don’t care much about saturated markets and all that.

So anyway, to share at least something, I’ve been working mostly on multiplayer, specifically, local multiplayer… (2 players on one screen)… and what it involves and how to set it up… etc. This project is about using a simple project and applying what I’ve learned and then also trying and learning new stuff on top of that, that is beyond my main project, and multiplayer is the next big thing for me to wrap my head around. So I’ve currently got it working pretty well and I’ll hopefully show that soon, including how it works… etc.