Summary: Kensington Manor is a stylized murder-mystery game, where the players are in the process of restoring an old Victorian Manor into a functional Bed and Breakfast, however, one individual is not his/herself. Something evil is within these walls. Will the players find and expel this spirit before it extinguishes them?

Concept: Kensington Manor is a online multiplayer game of matches consisting upwards to 8 players. The game plays out much like a game of clue with one player taking on the role of the antagonist, a possessed individual. The group will have to perform a number of tasks to make the Manor into a functional BnB, before the possessed individual turns the Manor into a scene of a mass murder.

Throughout the course of gameplay, each player will be given a list of tasks to perform and cooperate with each other to get the manor into a functional state. Each task will bring them closer to victory. The possessed individual has to be cautious though. Maintaining an aura of humanity, cooperation and ultimately deception is a must if the possessed wants to be victorious.

Each map will contain randomized room designs to keep gameplay fresh each time you step foot inside the manor. Take time to enjoy the quirky characters and spooky atmosphere, but not too much time, for you are likely being watched.

For more information, to follow the progression in detail, and gain access as a tester or beta releases, follow us at the Odium Studios discord channel here: Odium Studios

Screenshots: (Many more on the discord channel) 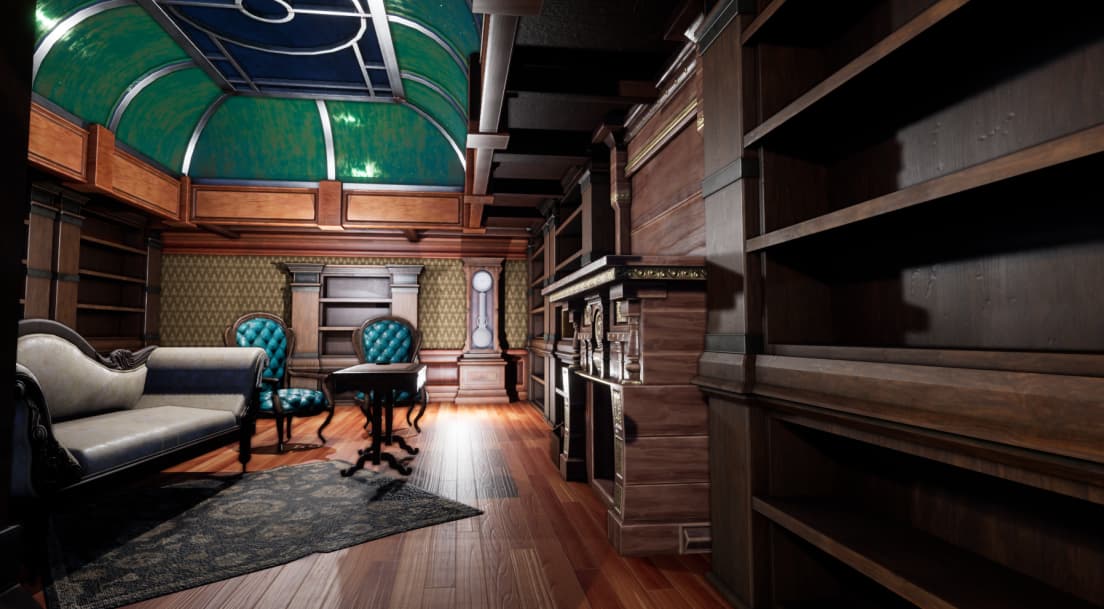 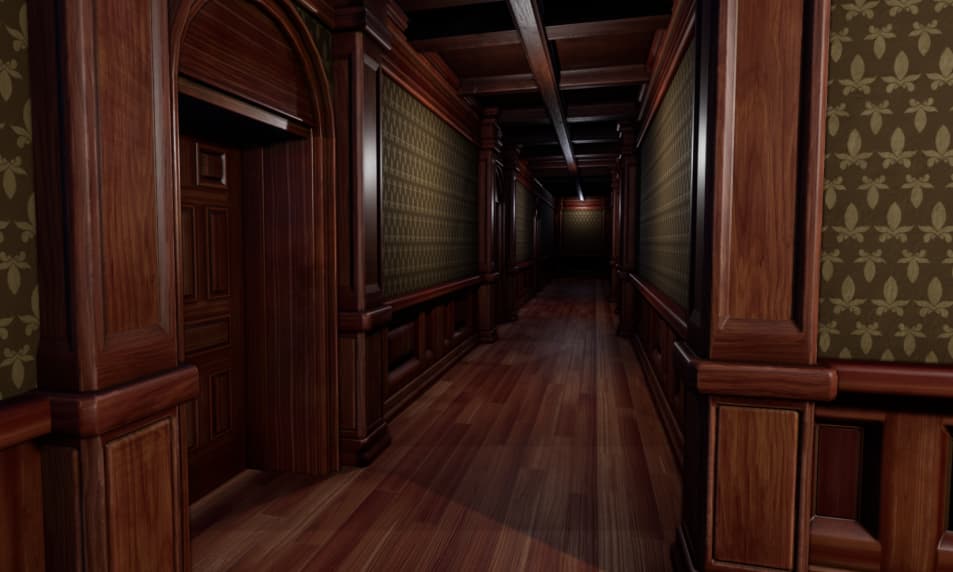 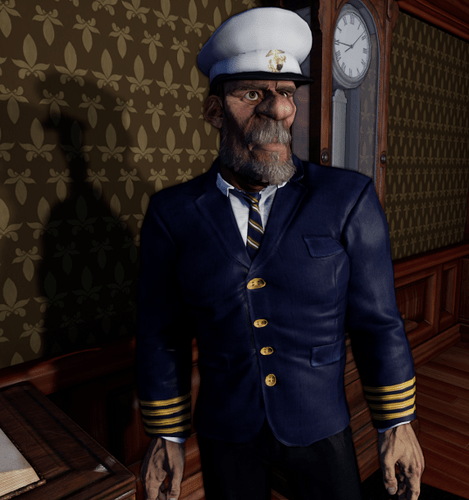 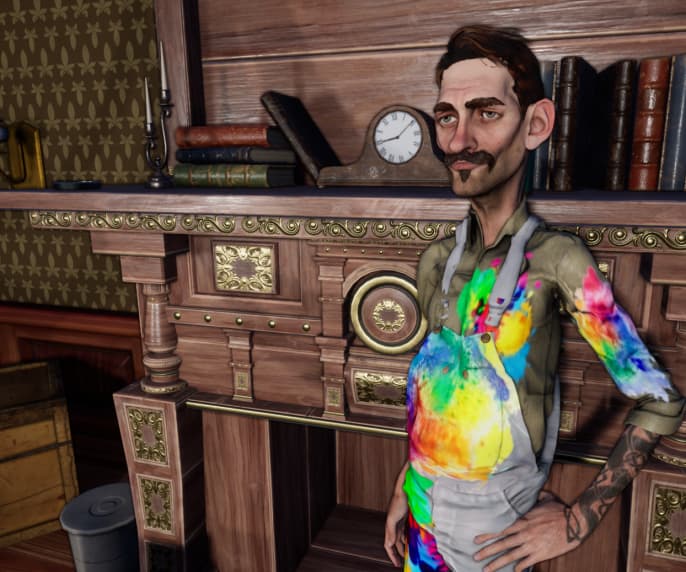 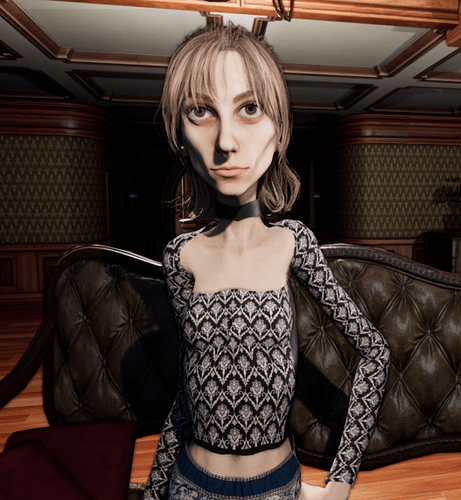 As always: Feedback is greatly appreciated, any suggestions on improvements are welcome, and support is always welcomed.

More updates with screenshots and videos will follow, as we are slowly gathering testers for our initial run-throughs. Thank you for your interest!

Greetings @TheVikingOne, and thank you for sharing your team’s incredible work “Kensington Manor” here on the Unreal Engine Forums! Where to begin, I’m hooked! The style chosen for the characters is perfect, and the overall visuals within the screenshots posted are amazing! I love the concept of the proposed gameplay, and I can imagine how it’ll all work out already.

How long have you and your team been working on this project?

Thank you very much for the kind words. We hope that this project can continue to grow as quick as it has. If you have a discord account, feel free to add our server.

Honestly, we have not been working as long as it may seem. Don’t be fooled by that statement however, as it’s been many, many long days and nights, especially for the very skilled programmer. Already, a vast amount of functionality, and online match making/playing has been produced. We have had our first online match, and are closing in on some larger, more public tester trials.

Trippy characters, especially the last one.

Thanks for views, interest and kind words thus far. Think it’s about time for some more images. 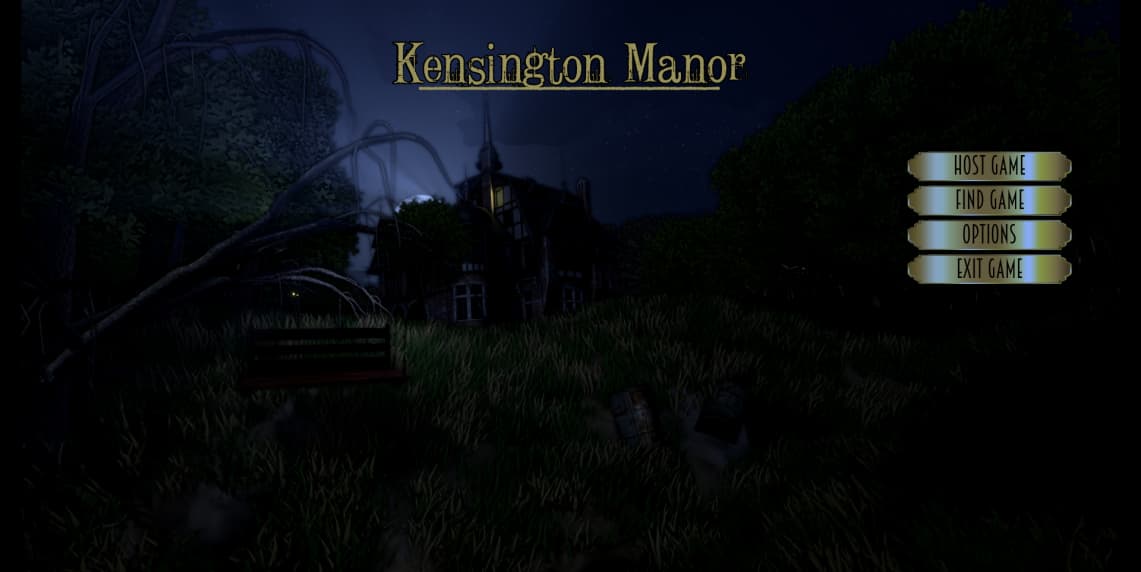 In Game Image: Player 1, looking at the Butler character/player 2 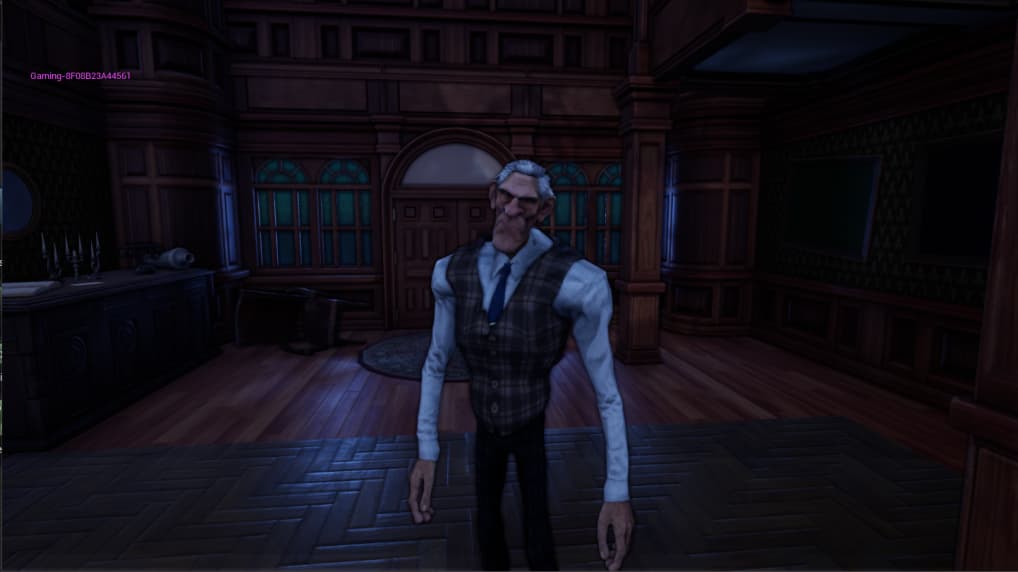 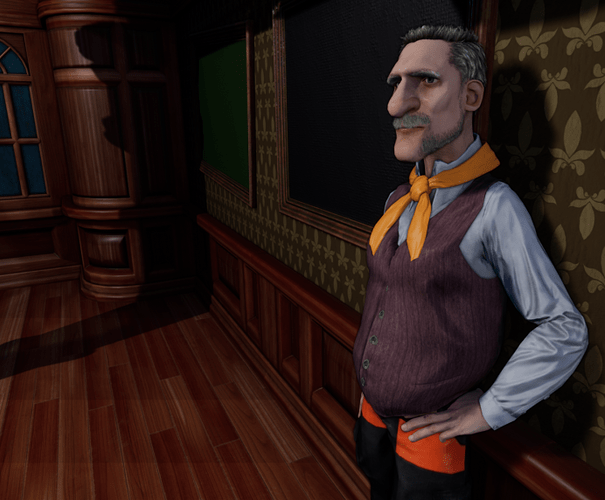 Video footage is planned soon enough, until then, I hope you continue to enjoy the teaser photos.

The pleasure is all mine! I can’t wait to see some gameplay footage! The teaser photos look fantastic, and with progress being made as fast as it is, does this mean you’re looking at releasing Kensington Manor sometime next year?

Indeed, we do plan to release this upcoming year. Additional maps, characters and features will be added as it goes along after release as well, to better meet community feedback. We still have some kinks to work out with online play, however, the kinks unravel quickly it seems.

A 2022 release, this is fantastic news! I, for one, can’t wait to wishlist Kensington Manor on Steam and play it with friends and hopefully the community you and your team garner along the way!

Thanks again @Zezkaii. Hopefully we can really get the support of more players, without the online players, it would not be as successful. On that note: More pictures, big photo drop here.

First let’s run through the menu:

A nice overhaul to the initial title screen coloring and design. 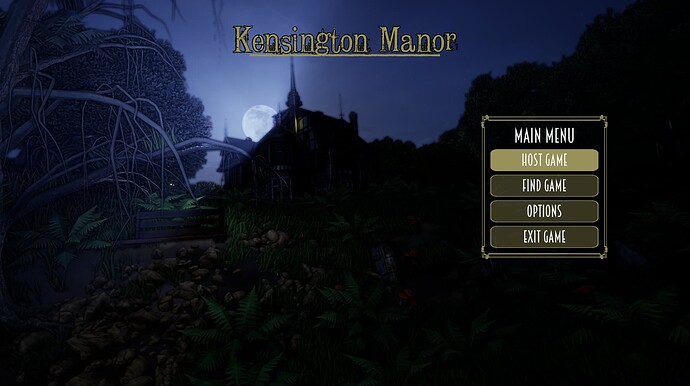 Looking for a game to join? This displays all available games. In this case we have numerous quickly named hosted games running and functional for test purposes (obviously the name is created by the individual hosting the game). 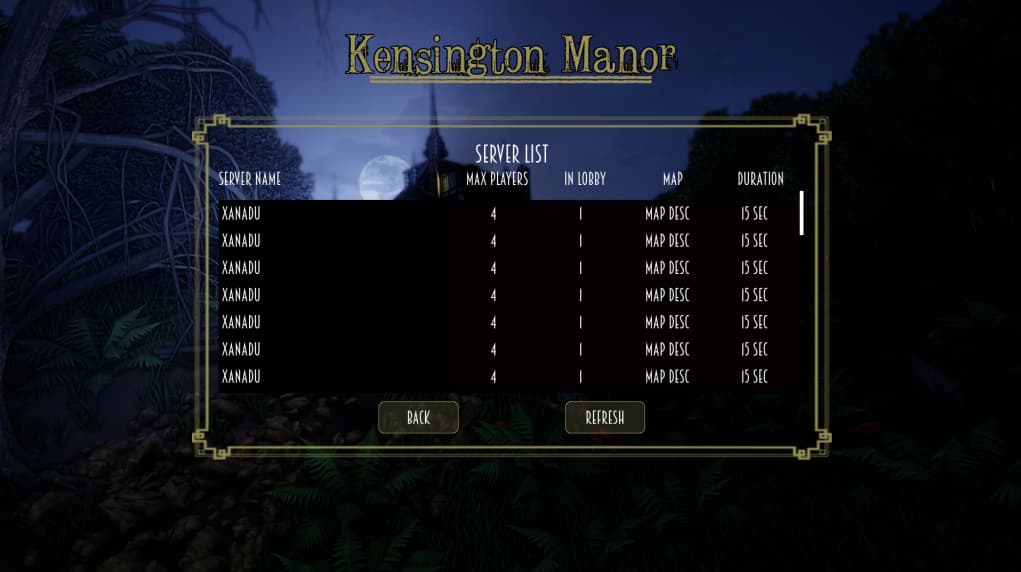 Once the server is created or game is joined, you get the lobby where you wait for the match to fill with enough players, and select the map to play on. 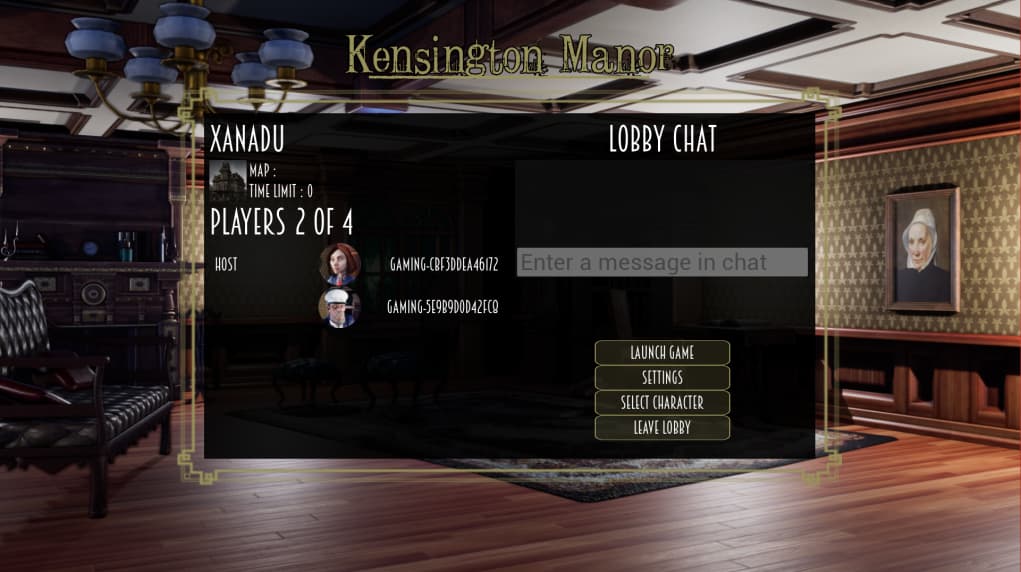 Choose the character you wish to play. List is expanding slowly, and more will come. 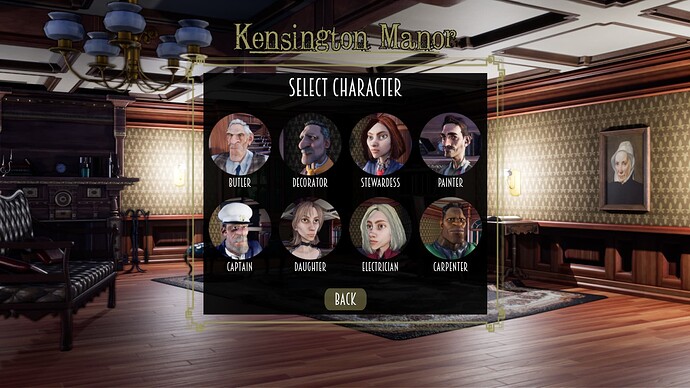 And, the captain is in game, also possessed (temporary text notification to indicate this, a better method is in development for indicating the possessed player) 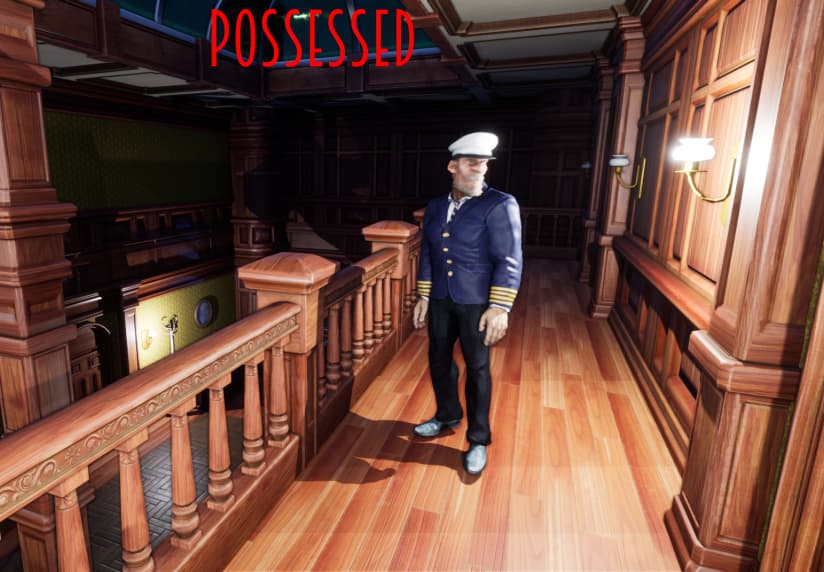 Now on to some more manor pictures: I realize little of the actual manor designs have been shown, so, it’s time to give a little more of teasers on this.

Let’s get some lights working.

The first manor to include an exterior section and greenhouse.

Time to go back to the first manor and show a little more:
Well, that’s a pretty out of date kitchen, in need of an update…

How about this furniture? We surely can’t open up a BnB with it in this shape.

Next, we need real fridges. So let’s upgrade the cold storage to industrial fridges. One done, one to go. 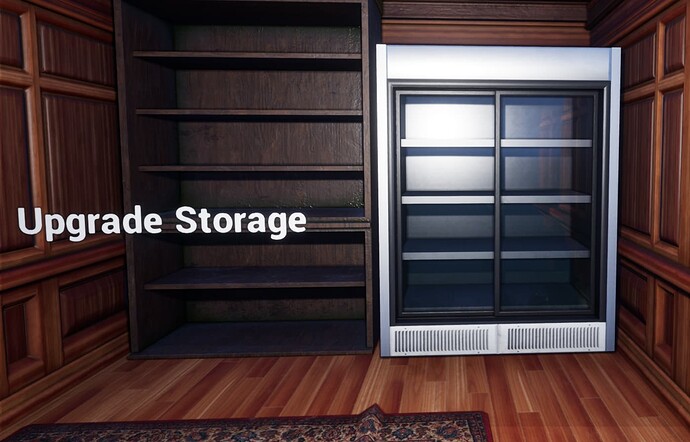 Finally, this all looks a bit too pristine for a haunted manor, don’t you think? Got it covered… we are working on a cobweb system to fill this nice place to the level of creepy.

Hope you enjoyed these as much as I did making these. As always, any criticism or comments are welcomed.

These screenshots are fantastic; keep them coming! The overhaul, on the initial title screen, is *chef’s kiss

I also love that your server list UI will display all available games, excellent touch. Your second manor is turning out as fabulous as the first one! I see you mentioned that the choosable character list is expanding slowly. How many maps/manors and characters do you think will be available to play upon initial release?

As always, thanks for the very kind words. For the initial release I am planning on 3 manors (keeping in mind they change slightly each time - graphically and where tasks are located, but not in main structural design), more will be added after community feedback from play. As for characters, it’s currently 8, which is in line with the 8 player cap (currently set) - also, subject to change from community. This number of player available on initial release may increase depending on time available, since we are getting into more intricate manor designs, and coding. I would like to see at least one more female added though, I’m looking to add a cook and maid into the mix. Need a bit more age variations for female characters.

No problem at all! I think the plans you’ve made for your game’s initial release are perfect; 3 maps and eight playable characters are more than enough for a wonderful time! Thank you for answering my question, and Happy New Year!

Congrats, loving the style of the characters!