Hello,
I started working on a small game to learn blueprints.
It’s a stealthy assassin dungeon crawler where you have to make sure you are not spotted by the guards because they one hit you.
You have to stab them in the back and make their boddies dissapear to make sure the other guards don’t notice anything.
I was also planning on adding a mechanic to throw stones and distract the guards attention.
Today I created a mock-up to finalise the art style.

Feedback is ofcourse always appreciated!
Thanks!

Hello again,
After some rough weeks (been ill and had a lot of other deadlines to keep up with before working on this) I’m back on track

This week I’ve made the rig and skin for my main character with cad.

Next 2 weeks I will have a lot of time so I’m looking to catch up and get this game going! Ofcourse there will be weekly or half weekly updates about that!
Have a good day

To start this of here are the animations implemented for my main character and guard.

After that was done I’ve started working on the guard AI, that was quite a job.
To break it down:

This is an example of you being spotted and reaching 100% which makes the guard chase and attack you.

This is an example of the guard that takes a look when he notices something but isnt sure about it. Notice how he walks slower, I will implement an animation for that later.

This is the blueprint for the guard. 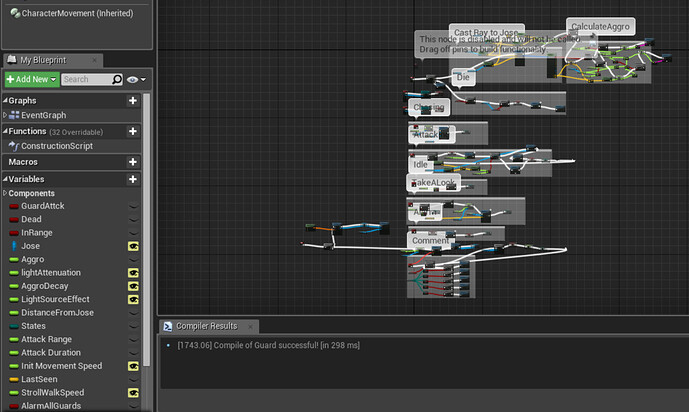 The final thing I did is give the main character the ability to kill guards.

To round this all up I’m going to talk about the direction and my next objectives.
Next week I want to have the level (seen at the start of the post) done. I also want to implement a door with a key mechanic.
So the goal is basically to find the key and open the door to the next level. If you want to kill the guards or not is basically up to you most of the time. you can also find the right pathing to sneak trough.
Multiple rooms with multiple keys and multiple doors will come for to make the game more challenging then the 1 room intro level ofcourse but thats not for this week.
Ohh yeah and the last thing I want to do due next week is finally give my characters eyes! I always seem to forget that.

So guys untill next week!
SourceCodeT

P.S. sorry for the gif sizes, I had trouble with the filesizes and had to rescale some of them.

I’m also happy with it. It looks good indeed and it’s quite fast to make as well

So I promised to do the key mechanic next. I implemented it this wednesday but didn’t find any time to make a post about it but now I have some so here it is! 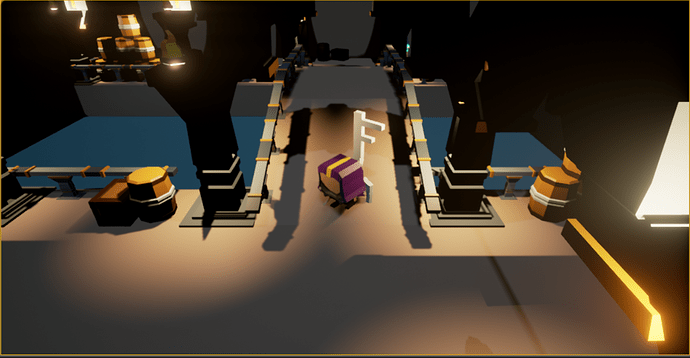 So I’ve made a big key to place in the level which you have to find. I made it big so it isn’t a big search in every corner (which I don’t like myself in games).
When you find it you press the pick up key which places the key on your back. If you come to the end door with the key you are able to proceed.

So it’s a short post today because I wasn’t able to do a whole lot but I will certainly be back with more updates!
Have a nice day

The last week I’ve been working on my UI and menu screen. 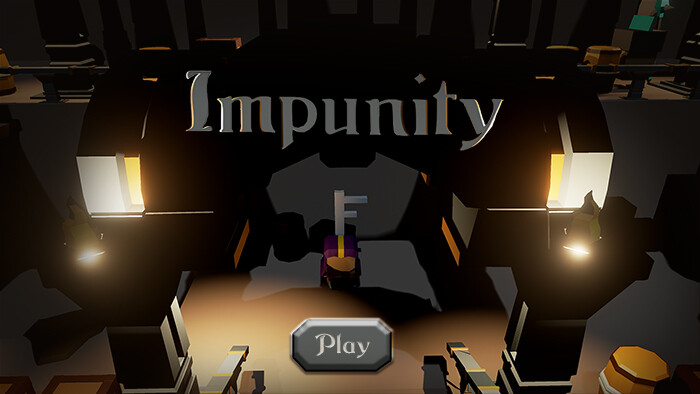 So this is the menu, I still need to add the controlls button so You get an overview with the controls.

Here are the guards still missing but the base is already there!
I hope you guys like it,

have a great day

This part really took a whole lot more time then I thought. The minimap was way more complex and I had to do a lot of research to get things done. But after all that I finally got it completely working!
Normally I planned to do all this work in one week but I had to extend the deadline. What I did is: add the enemy guards to the minimap, add the key to the minimap and make them all work like they should in a radarHudBlueprint with a lot of functions. 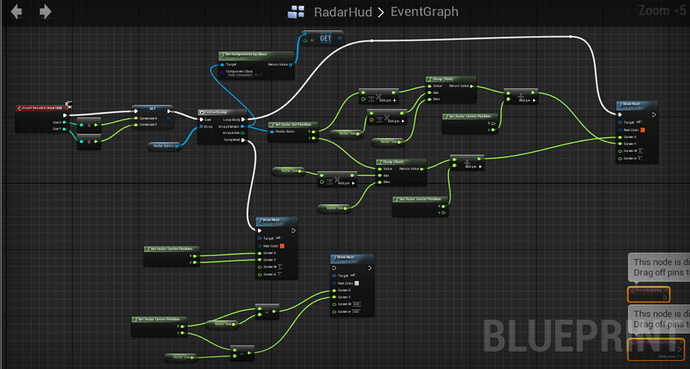 At this moment I’m working on more Player feedback like particles, more explanations showing about what the main goal of the level/ game is etc.
I hope I can come back with an update as soon as possible!

The last weeks I’ve worked on my finals and on making this a finished game!
I’m pretty happy with the final result and also with what I’ve learned from it.
Let’s dive into what I’ve done to finish this up!

Here you can see the intro UI I’ve made to explain more about the game (right bottom corner). 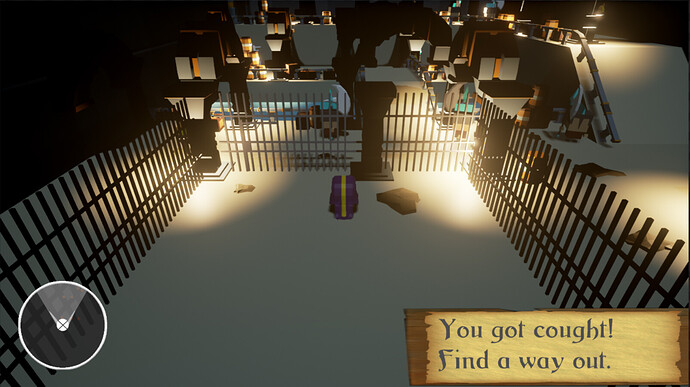 I also made a prison cell which you can open by picking the lock! 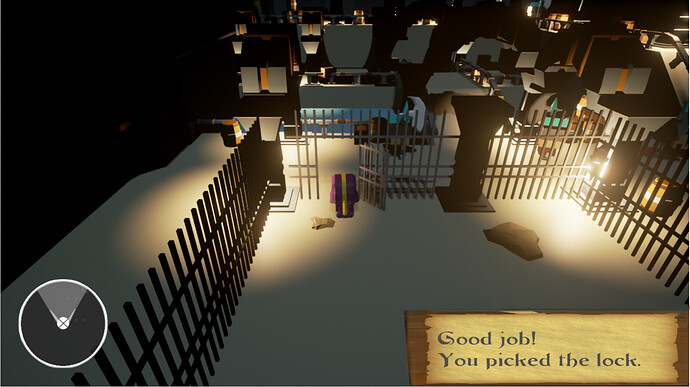 After that I tried to make the guards which spot you easier to see and notice you have been spotted. I’ve also added animation and particles for the look around and the surprise when he sees you’ve escaped. 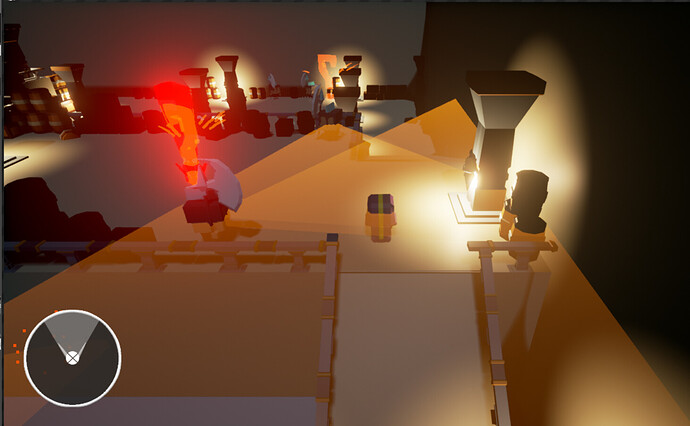 I created a whole new level so there is a little bit more playtime in the game. Ofcourse I always can make more when needed.

And last but not least I made a pause screen and an Endscreen. I also made a game over screen for when you die. 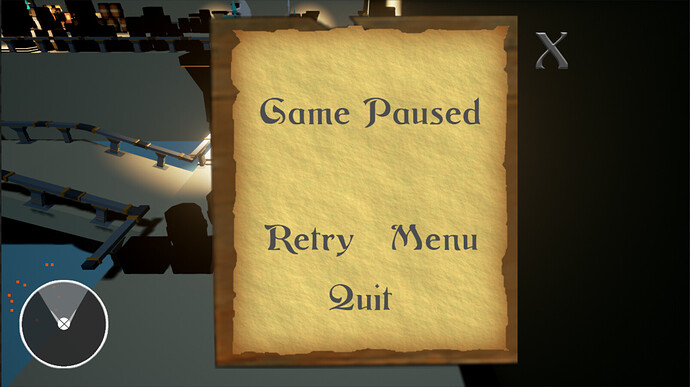 All this I merged into a final build!
That was it for now!
Later