We’re two friends who started developing games for fun. Today we have 4 years of experience with Unreal Engine and many 3d modeling tools and additionally, numerous submissions for UE4 game jams and other prototypes.

We would like to know if our latest development provides an enough interesting concept to continue working on it and furthermore, we are really looking forward to hear some feedback about the game in general.

[HR][/HR]
You control a Factroid. A machine built to colonize new planets, gather and process resources as well as evolve with better technology. Build a main base and automate item production and research new technology. It will be possible to scan other planets and even solar systems to expand your factories and eventually colonizing the whole galaxy.
[HR][/HR]

Looks very Factorio inspired, which is not a bad thing because I love that game. Great job! This looks like one of those few games I would buy on the Play Store.

Thank you for your reply! We are working hard on a open beta release in the very near future

We’re happy to announce that we’re making good progress on our sector and planetary system. It will be possible to scan for new sectors and resources as well as send scouts to build new outposts and transfer resources. 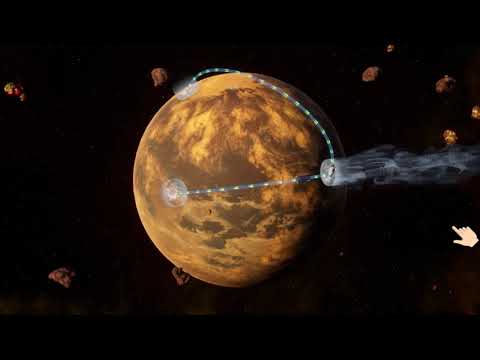 This week we integrated a new belt system. It’s entirely based on math and thus works much smoother than the old physic based one. Also the new belts provide a better and longer game experience since they consume much less performance. For the visual aspect we implemented curved belts which are still WIP but do their jobs pretty good 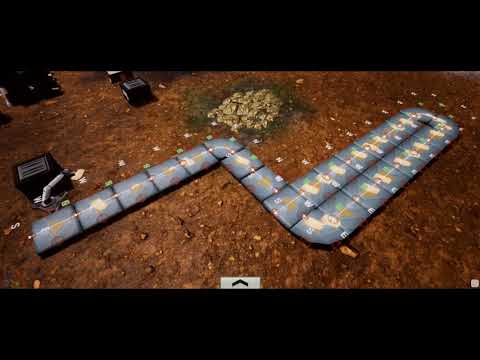 Further more we added special sectors on asteroids. The idea behind this is that they will contain an increased amount of an ore type to mine from. The available building space will be the biggest challenge to overcome. 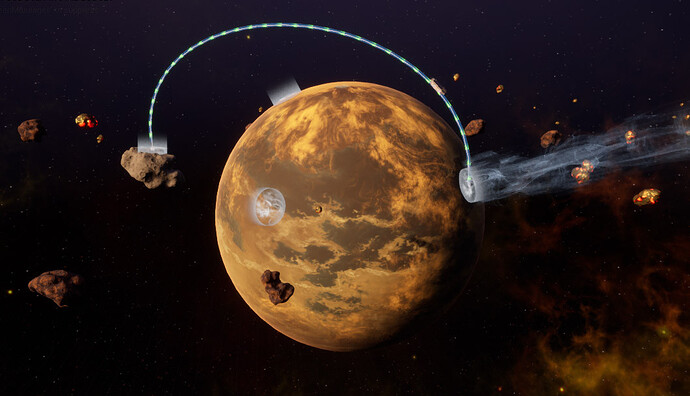 We were able to add a belt part that splits a line in two or combines two lines into one. The splitter is still work in progress and needs a little tweaking but does its job pretty decent for now. 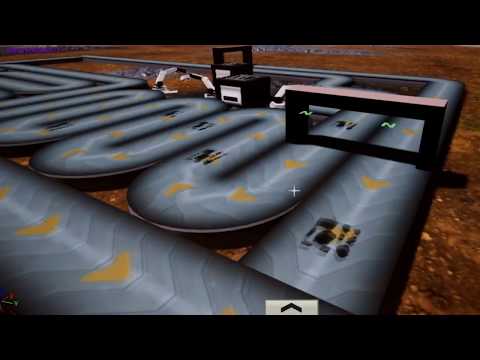 We worked hard to present you the new satellite, that handles the scan process and will provide more functionality in the future. Later the scanning will cost resources and will be a lot slower. We also included a mechanism for the satellite and the transporters that they can continue working while the player is in the sector view building and upgrading their factories.

We created a new map and did some work on the ones we already have. Props got added and we experimented with “Pixel Depth Offset” to smoothen material transitions between landscape and props like rocks or ores. 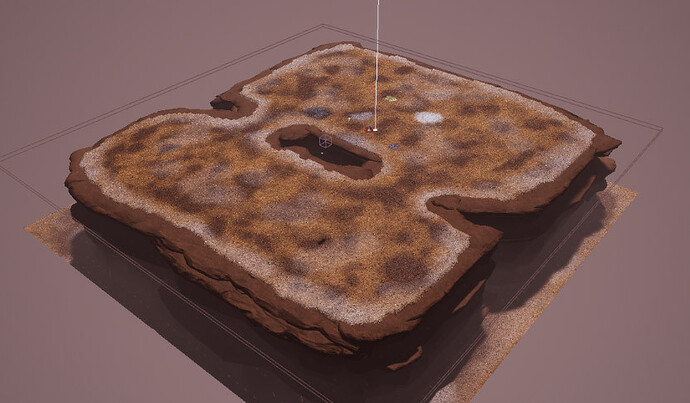 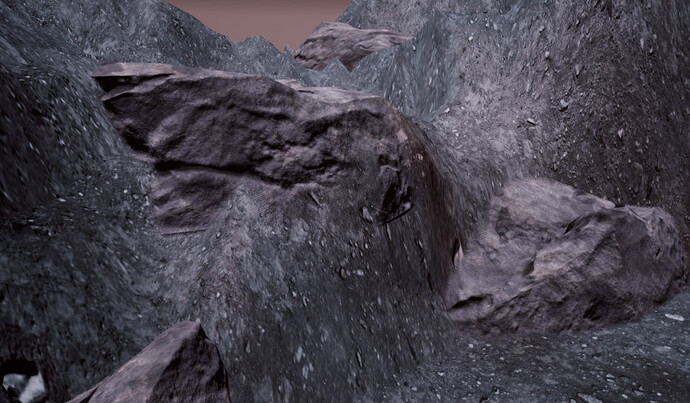 We did a lot of performance tests and decided to make the maps smaller and focus more on the management in the planet view.
Here are some pictures from the latest progress. 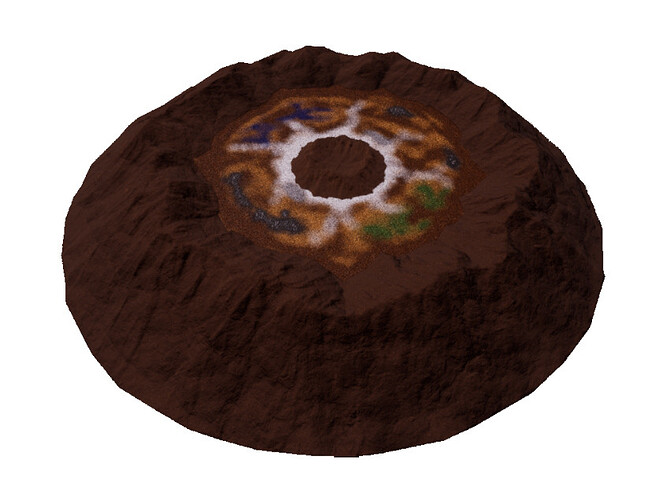 Belts that build a loop: (WIP)

We extended the new belt system with functions to detect belts that build a loop since the system was not capable of moving items when no next item spot is free.
We also changed the method how items move on belts. The solution needs some performance tweaking but is much more reliable now. 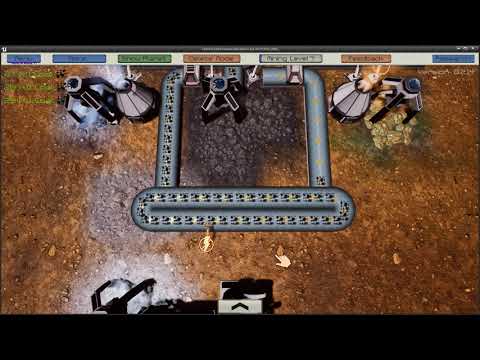 We expanded the planet view UIs with a dropdown menu to select a destination a bit faster and added global (ingame) notifications when new sectors were found or transporters have arrived at their destinations. 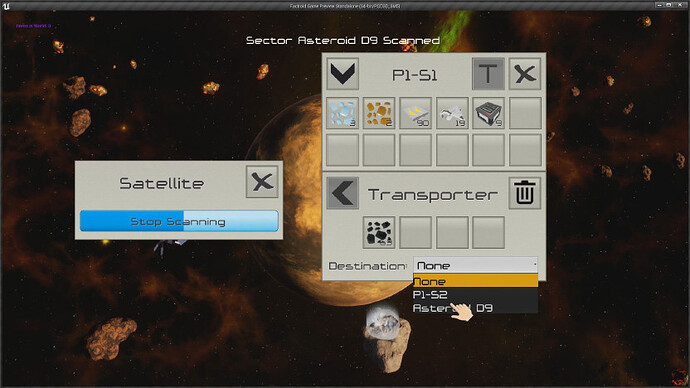 A new statistics window is now available that shows item production over a specific time. This is the first step for a continuous production even if the game is closed (offline-mode). 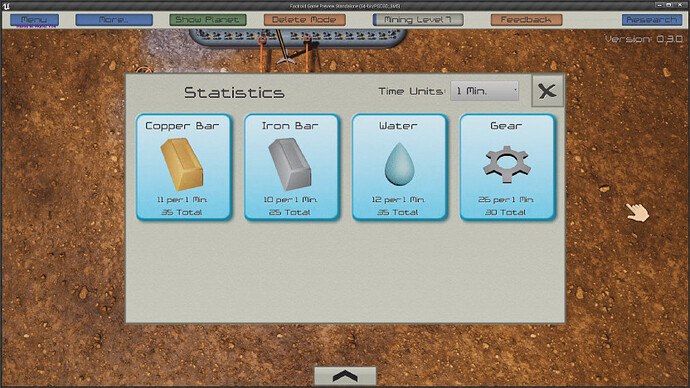 The splitter got a visual improvement with a new mesh as well as animations when an item gets moved inclusive an indicator for the next output lane.